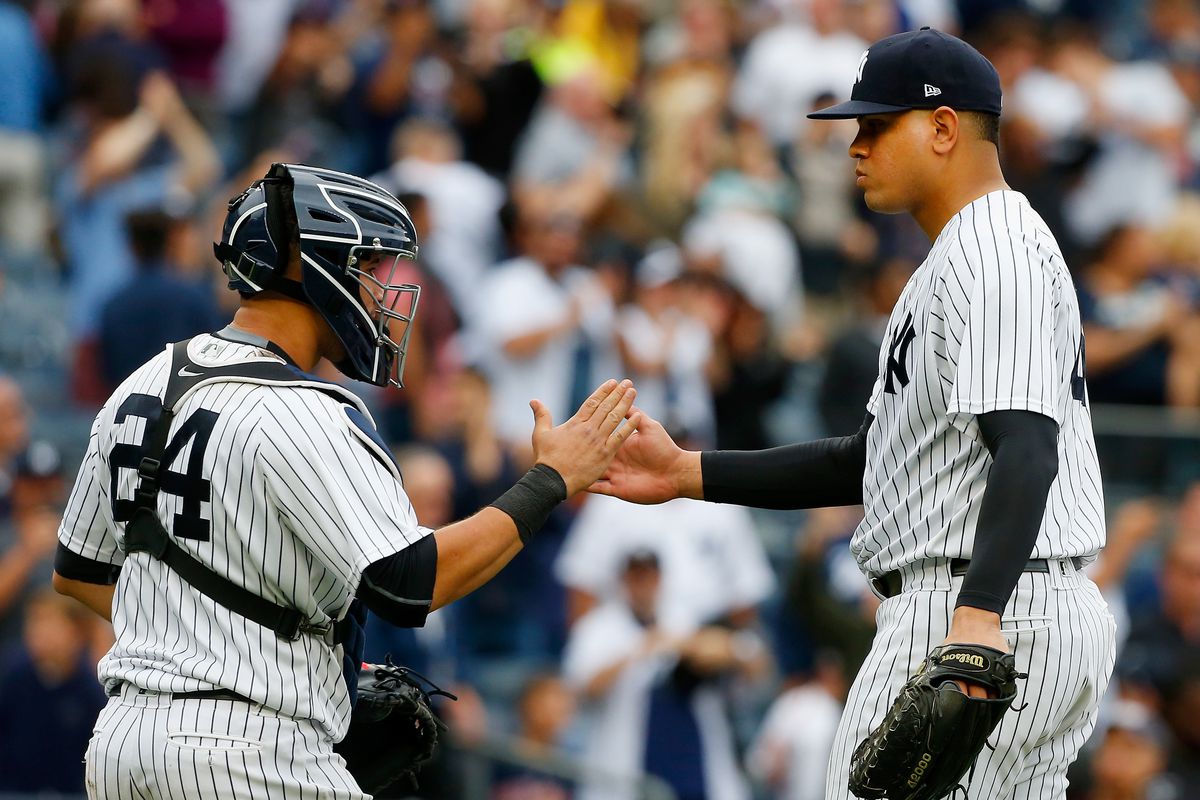 NEW YORK – On Tuesday night, the Minnesota Twins yet again fell to the New York Yankees in the postseason. In what was truly a “wild” game in every sense of the word, New York displayed their dominance. Eleven pitchers were used (6 by Minnesota, 5 by New York), but New York’s bullpen was far superior. Yankee relievers pitched 8 2/3 innings allowing only one run and accumulating 13 strikeouts. Minnesota came out swinging, showing that they belonged in the postseason, but the superiority of the Yankee roster eventually won out. New York scored eight runs on nine hits, committing no errors in the field. Minnesota scored four runs on nine hits, committing one error in the field.

Here’s how it all happened:

The game started off with a bang. Twins second baseman Brian Dozier took a 3-1 pitch and blasted it over the left field wall to lead off the game. After Luis Severino retired Joe Mauer on a popup, he would walk Jorge Polanco. Into the batter’s box stepped left fielder Eddie Rosario, who would extend the Twins’ lead to 3-0 with a two-run homerun to right field. Eduardo Escobar would then sharply singled followed by a double from Max Kepler. With two runners in scoring position and only one out, Joe Girardi pulled Severino in favor of Chad Green in relief. Severino allowed three runs on four hits (2 homeruns) and allowed one walk while only pitching a third of an inning, the shortest postseason start by a pitcher in Yankees history. Green would come in and retire the first five batters he faced, including four strikeouts.

The Yankees would not be down for long.

Ervin Santana, like Severino, lacked command of his pitches early on. Brett Gardner, the Yankees’ leadoff batter, was walked. Then Santana allowed a single to Aaron Judge with a full count. Gary Sanchez then popped out in foul territory. In the following at-bat, Didi Gregorius smashed a three-run homerun to right field to tie the game 3-3. Santana managed to finish the inning preserving the tie, but would give up the lead in the second inning on a solo homerun by Brett Gardner, giving the Yankees a 4-3 lead. Santana would only pitch two innings, allowing four runs on three hits (two homeruns) and walking two batters. Neither starting pitcher struck out an opposing hitter.

Coming into the game, the Yankees had a much deeper bullpen than the Twins, and through the middle innings it showed. Chad Green retired the first five batters he faced, but would then face some trouble in the top of the third inning. Polanco singled, and Rosario and Kepler each drew walks to load the bases with only one out. Green would then be relieved by David Robertson. Byron Buxton would ground into a fielder’s choice, allowing Polanco to score the tying run (4-4). The run was assigned to Green, who finished with two innings pitched, allowed one run on one hit, and also had two walks and four strikeouts. Robertson struck out Jason Castro to end the top of the third.

Jose Berrios relieved Santana in the third. Facing his first batter, Berrios allowed Gary Sanchez to line a double into left-center field. Berrios would respond by striking out Didi Gregorius and Starlin Castro back-to-back. Just as it appeared that Berrios would escape the third inning unscathed, Greg Bird would plate Sanchez on a single, allowing the Yankees to reclaim the lead 5-4. Berrios would allow another single, this one by former twin Aaron Hicks, before getting out of the inning.

After the Twins were held scoreless in the top of the fourth inning, the Yankees looked to add to their lead in the bottom of the frame. Zack Granite replaced Byron Buxton in the outfield this inning as it appeared Buxton suffered an injury due to a catch he made earlier in the game in which he collided with the wall. After Gardner reached with a single, there was nothing neither Granite nor a healthy Buxton could do about the ball that Aaron Judge hit. Judge crushed a two-run homerun to left field, extending the Yankees lead to 3 runs, score 7-4.

Berrios would finally toss a scoreless frame in the bottom of the fifth, but by that time the damage had been done. Berrios would finish his night having pitched three innings of relief, allowing three runs on five hits (one homerun) with four strikeouts. Trevor Hildenberger, the Twins reliever with the wacky sidearm delivery, stepped in and pitched the Twins’ first one-two-three scoreless inning of the game in the bottom of the sixth.

Hildenberger would run into trouble in the seventh. Judge would be walked, Sanchez singled, and Gregorius would be intentionally walked to load the bases for Starlin Castro. Castro would fly out to short right-center. Hildenberger (1 1/3 innings, one run, one hit, two walks) was then pulled from the game to be replaced by left-hander Taylor Rogers with one out and the bases loaded. The game was at a tipping point. Rogers struck out Bird, two outs in the inning, bases still loaded. Paul Molitor then pulled Rogers to have Alan Busenitz pitch to Aaron Hicks.

The Busenitz outing did not go quite as planned. Busenitz walked Hicks with the bases loaded to extend New York’s lead to 8-4. Jacoby Ellsbury would then fly out, ending what could have been a disastrous inning for Minnesota.

Meanwhile, David Robertson continued to shut down Twins hitters, finishing his night pitching three and one third innings while allowing zero runs on three hits, only walking one batter. Tommy Kahnle relieved Robertson with two outs in the sixth. Kahnle would finish off the Twins in the sixth and then throw a scoreless seventh.

Kahnle remained on the mound for New York at the start of the eighth inning. He would retire all three batters, finishing the eighth with a strikeout of Ehire Adrianza. Kahnle finished his night with 2 1/3 innings pitched, allowing no runs, hits, or walks.

Right-hander Matt Belisle would get the ball to start the bottom of the eighth for the Twins, relieving Alan Busenitz. Belisle retired all three batters he faced, including Gardner and Judge. This ensured that the Twins had to face only a four run deficit in the ninth. Only four runs.

Standing of the way of the Twins’ comeback effort in the ninth was hard-throwing lefty Aroldis Chapman. Robbie Grossman struck out on a 103 MPH fastball from Chapman to start the ninth inning. Brian Dozier also whiffed at a 103 MPH heater to give Chapman his second strikeout of the inning. What was shaping up to be a perfect inning for Chapman was broken up by an opposite field single by Joe Mauer. Jorge Polanco would not extend the rally as he would also strike out a la 103 MPH fastball, ending the game.

The Twins will head into the offseason knowing that they will need to address the obvious holes that their pitching staff still possesses. In what was supposed to be a rebuilding year, the young Twins roster surpassed expectations and reached the postseason. With a couple more pieces this team could be a playoff fixture for years to come.

The Yankees are now the four seed in the AL bracket and will face the Cleveland Indians in game one of the ALDS on Thursday night. While New York has yet to name starters, we know that the Indians plan to start Trevor Bauer for game one and Corey Kluber will get the nod for game two. If anything we saw in the Wild Card game is an indication, the Indians pitching staff may have their hands full.