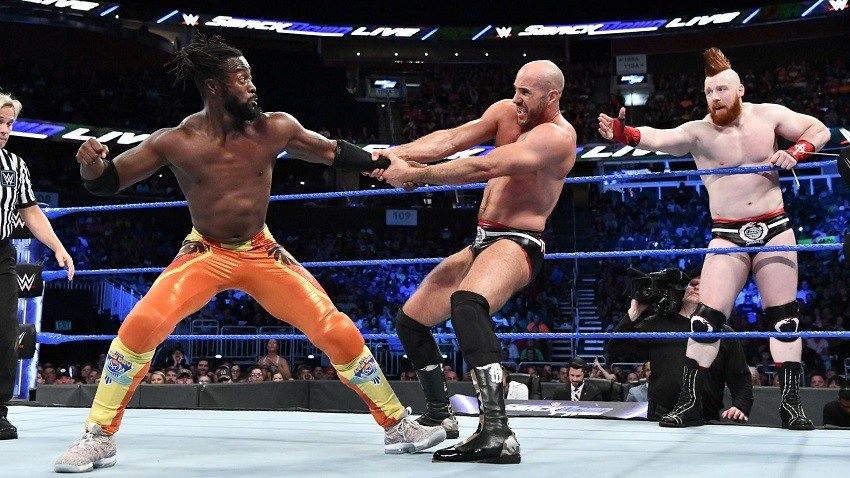 This past Tuesday's epic main event between the New Day and the Bar was a fitting showcase of the now loaded SmackDown tag team division. (Photo Credit: Critical Hit)

With SummerSlam, WWE’s premier summer pay-per-view, now less than a week away, I thought it would be a good time to put in writing my recent observations about the state of the WWE and its two main brands, RAW and SmackDown Live. The two shows have gone in very different directions in recent months in terms of how they came out of Extreme Rules, and how they have set up their respective SummerSlam matches. Long known as being the “second” brand, SmackDown Live has, in my opinion, far surpassed RAW in terms of interest level over the course of the summer.

The Women of SmackDown

I will start this off by discussing the positive things SmackDown has done. With Daniel Bryan giving up his position as SmackDown general manger upon receiving clearance to return to in-ring action, the move by the Blue Brand to bring on Paige as the new GM was a brilliant one. Fresh off retiring from her own wrestling career due to a neck injury, Paige was a relevant superstar just months before. Shane McMahon has not been active in making show decisions as the commissioner since the WrestleMania season, but he hasn’t needed to be. Paige has done a great job on her own, with a specific emphasis on improving the landscape and entertainment value of the women’s division.

With that said, the SmackDown women’s division has also received a significant talent boost. A fruitful haul from the Superstar Shakeup left SmackDown with a women’s locker room headlined by current champion Carmella, Charlotte Flair, Asuka, Becky Lynch, Naomi, Lana, the Iconics, and the remaining two women from Absolution, Mandy Rose and Sonya Deville. As last year’s “Miss Money in the Bank,” it was only a matter of time before Carmella got her hands on the championship. Since then, she has become an impressive heel for the division. The brief return of James Ellsworth at Money in the Bank was enough to extend her reign up through Extreme Rules where the Shark Cage Match fiasco was one of the highlights of that pay-per-view. Paige fired Ellsworth a few weeks ago on SmackDown, and Mella is now staring a SummerSlam triple threat against both Charlotte Flair and Becky Lynch in the face. No matter what happens, it is sure to be a thrilling contest with three of the best women’s performers in the business.

Randy Orton has made a point of going after Jeff Hardy in the most sadistic of ways since his return. (Credit: WWE/Muscle & Fitness)

The SmackDown Live men’s division also received a nice haul in the 2018 Superstar Shakeup. While losing Kevin Owens and Sami Zayn, both banned from the show after losing to McMahon and Bryan at WrestleMania, SmackDown received Samoa Joe, The Miz, and Jeff Hardy, who brought his United States Championship along with him at the time. Where the blue brand got its biggest boost was in the tag team division. The tandem of Luke Gallows and Karl Anderson returned, and they were joined by The Bar, Sheamus and Cesaro, as well as the arrival of the SAnitY trio from NXT. Combined with the already rostered Usos, New Day, and Bludgeon Brothers, the division went from being dismal a year ago to suddenly loaded with talent.

It has been on full display in recent weeks, as Paige set up a four-team tournament to determine who would face the Bludgeons at SummerSlam. The tourney culminated with an epic main event match this past Tuesday that ended with the New Day emerging victorious over the Bar. But the action coming out of the men’s locker room hasn’t been limited to the tag teams. Long-standing WWE Champion A.J. Styles will have his work cut out for him at SummerSlam, facing the intense and hungry Samoa Joe. The Miz and Daniel Bryan have had an on-going and hilarious feud now lead to a pay-per-view match, and there has been drama circling around the United States title just like the viper, Randy Orton circles his prey. Orton has a clear issue with the former champion Hardy, but with Shinsuke Nakamura holding the belt, the waters are murky, and it remains to be seen just where things are headed.

Is RAW Too Predictable?

So what is RAW failing to do to keep pace with SmackDown? For me, the red brand has gotten to be incredibly predictable and just a replica of its own self. Take this fact into consideration: every single one of the RAW brand matches set to take stage at SummerSlam is the exact same matchup that occurred at Extreme Rules last month, except for two. One of those is Universal Champion Brock Lesnar’s fourth (yes, that’s right, FOURTH) title defense against Roman Reigns. Lesnar has turned into the bad guy with a return to the UFC now likely. He has been outspoken in not caring about the WWE Universe and has even turned on his advocate, Paul Heyman. It all sets up perfectly to shove more Roman Reigns down everyone’s throat. Portraying Reigns as the good guy to bring the Universal Title back to nightly appearances on RAW is exactly what the set-up was when the two squared off at WrestleMania. There was a mini tournament to determine who would challenge the Beast. The final match of that tournament? Reigns beat Bobby Lashley, who he lost to at Extreme Rules. Shocking right?

The intercontinental title scene has just been rematch after rematch for the past month as well. After getting help from Drew McIntyre to win the Iron Man Match and retain at Extreme Rules, Dolph Ziggler will yet again defend against Seth Rollins at SummerSlam. Even Braun Stroman has turned into a repetitive act. He will face his Extreme Rules opponent, Kevin Owens, again at SummerSlam, where a loss will hand his Money in the Bank contract to Owens. Way to make even your greatest asset boring, RAW.

The most entertaining part of the RAW brand currently is the women’s division. I am super hyped for the Ronda Rousey-Alexa Bliss match at SummerSlam. It has been built to the point where Rousey just wants to tear Bliss’ head off, something a lot of fans are excited about given the heel Bliss has been during her title reigns. Regardless, both are polarizing figures and great performers and the match should be epic. But the rest of RAW has fallen into a state of repetition. I didn’t even mention the redo Extreme Rules match set for SummerSlam between Constable Baron Corbin and Finn Balor. Honestly, the rift between Corbin and general manager Kurt Angle has become one of the funniest parts of RAW, which is not saying much for the actual in-ring action. The tag team picture on RAW feels reduced to where SmackDown’s once was. First of all, how are Curtis Axel and Bo Dallas undefeated champs? And second, how does the Revival keep getting involved? They are terrible! Bray Wyatt and Matt Hardy are clearly the cream of the crop, making the path of the division very unclear to me. Even the lower level matches are just repeats. Mojo Rawley is out there wrestling every Monday night. I think in the last two months, he has only faced two opponents. First, it was No Way Jose like four times. Now, it’s Tyler Breeze week after week. BOOOORRRRR-IIIINNNNNGGGGG!

Hopefully the match repetition on the RAW brand will come to an end after SummerSlam and some new feuds will be born. But for now, I suggest you make your appointment WWE viewing on Tuesday nights for SmackDown Live. The tag team division is insane, the women’s locker room is full of talent, and the champ, A.J. Styles, continues putting on incredible matches as fresh contenders keep attempting to dethrone him. The United States Championship has action around it as well, even being the show’s lesser belt. When the brands first split a couple of years ago, RAW was far and away the premier act. But the tides have turned in a big way, and SmackDown Live deserves your attention and respect!

Stay tuned for my complete breakdown of the SummerSlam card right here on FlurrySports! Predictions of every match will be included!