Where Do the Pelicans Go From Here? 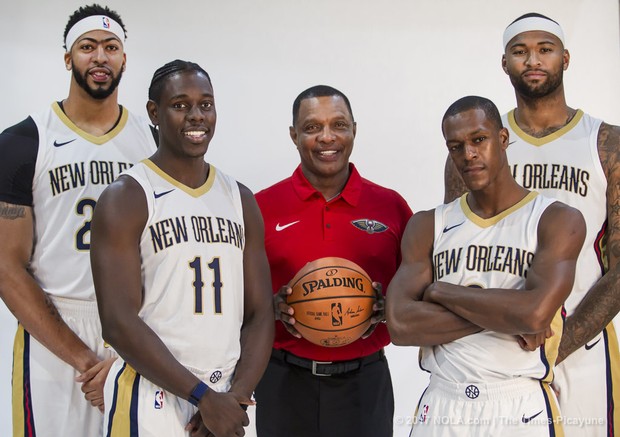 This is the New Orleans Pelicans edition of a series where we breakdown what went well, what didn’t, and suggest improvements for each playoff team that was eliminated in the 2017-18 playoffs. Check out Devin’s article about the Portland Trail Blazers here.

The New Orleans Pelicans finished their 2017-18 campaign by losing to the Golden State Warriors in five games. Many feel that the Pelicans are just one player away from serious contention in the West given how they swept the Blazers and pushed the Warriors, despite the series only going five games. However, there is a lot of uncertainty in the future of the Pelicans, because they believed DeMarcus Cousins was going to be the guy that pushed them over the edge in the West before he tore his Achilles in January. Cousins is set to become a free agent after this season ends. Here is a list of other Pelicans set to become free agents…

The first thing the Pelicans need to do is resign point guard Rajon Rondo. Rondo is the perfect point guard when he is surrounded by other talented players he can feed the ball to, and Anthony Davis is an MVP candidate who paired with Rondo perfectly all season. Rondo averaged 8.2 assists in the regular season, but stepped up that production to 12.2 in the playoffs; a career best. In the regular season, Rondo posted the most assists by any player since 1996 when he dished out 25, which accounted for 58 points for the Pelicans that night! Signing Rondo to a deal, such as a two-year, $6.5 million contract, will give the Pelicans a perfect player to initiate their offense so Anthony Davis can focus more on scoring the ball. Rondo is also an above average defender who can take pressure off of Jrue Holiday on the defensive end. Most importantly, Rondo has experience positive play with the Pelicans most important free agent this offseason; DeMarcus Cousin.

While Cousins helped complete the most formidable frontcourt in the NBA alongside Anthony Davis, the Pelicans should let him walk despite the fact that Cousins indicated interest in resigning. After Cousins tore his Achilles, the Pelicans traded for Nikola Mirotic, who filled in nicely for Cousins by spreading the floor. Mirotic is also under contract for just $12.5 million and will be a free agent after next season. By letting Cousins walk, the Pelicans can save money and address their biggest need; the Small Forward position.

Obviously the most coveted Small Forward free agents are Kevin Durant, LeBron James and Paul George. The issue is that all three of those players will most likely stay with their current team (Kevin Durant and maybe James) or leave to Los Angeles (George and again, maybe James). Therefore, watch for the New Orleans Pelicans to target players such as Jabari Parker, Tyreke, Evans, or Trevor Ariza. Of the three, Evans has the highest ceiling and could be a valuable addition to the Pelicans given his improved shooting ability. The Pelicans could further bolster their roster by adding Zach LaVine for his ability to play off the ball and his improved consistency on the offensive end after his torn ACL.

The Pelicans are so close to being a top team in the west. Let’s hope that they are able to throw a wrench into the cogs of the predictable Western Conference in the next 3-5 years.

Should the Blazers Blow it Up?
Utah Jazz Need to Find Their Rhythm This Offseason