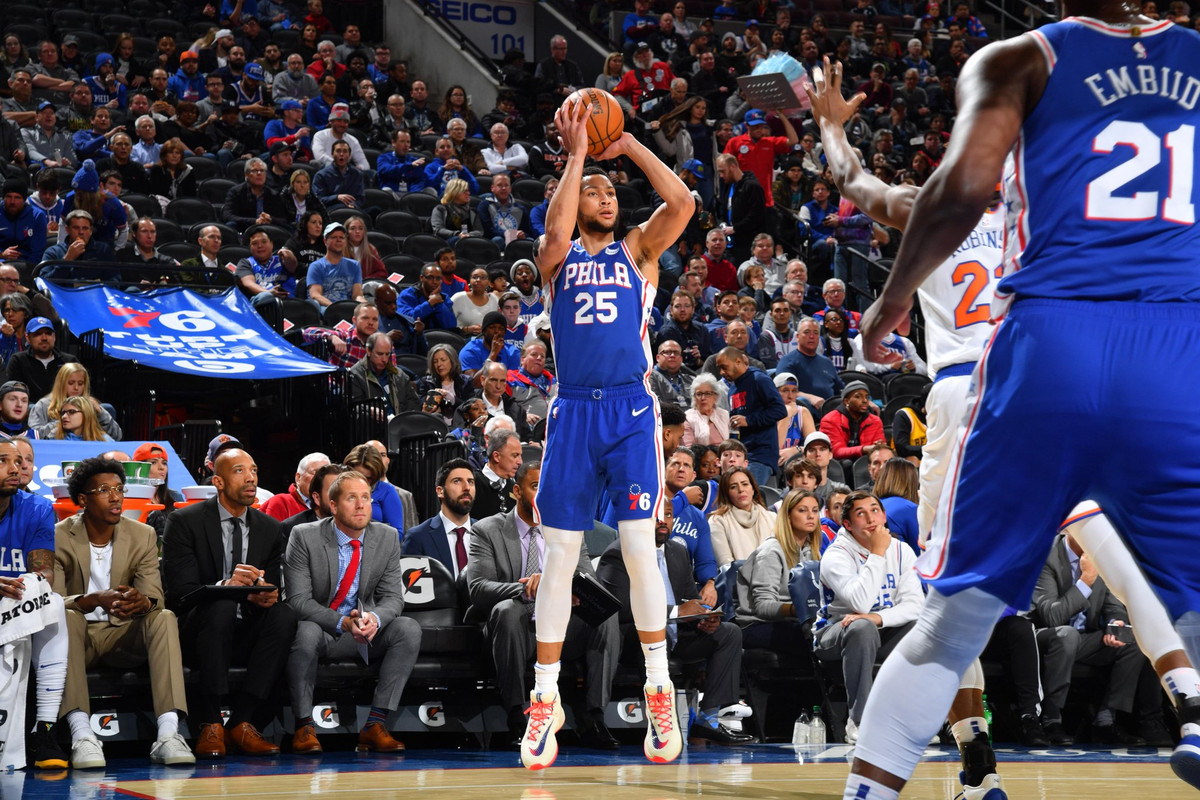 In the spirit of Thanksgiving this week, let’s take a look at what each Eastern Conference team fanbase has to be thankful for so far this NBA season.

CLICK HERE for what every Western Conference team has to be thankful for.

To whom much is given, much is expected. Trae Young has seen a boost in both playing time and responsibility for the success (or failure) of the Atlanta Hawks. While the team’s hopes of making the playoffs may be gone, Young is carrying his team in a way that very few 21-year-olds can. Young is playing more minutes and taking more shots this season, but his shooting percentage has gone up from last year, and he is averaging a cool 26 points per game. The Hawks may not be going anywhere as a team this season, but Young is looking like more than a flash in the pan.

Boston Celtics: Kemba Walker is going to be okay

The hearts of Boston Celtics fans stopped on November 22 when Kemba Walker collided with teammate Semi Ojeleye and appeared to sustain some sort of head/neck injury. Walker was eventually carried off of the court in a stretcher and taken to a hospital. Most Celtics fans were brought back to memories of Gordon Hayward’s catastrophic injury in 2017. Walker luckily only came away with concussion-like symptoms and a strained neck.

Brooklyn Nets: Spencer Dinwiddie is back to his old self

To start the season, Spencer Dinwiddie seemed to struggle with finding his role on a team with ball-dominant point guard Kyrie Irving. Dinwiddie averaged 15.4 ppg through his first seven games. However, in his last nine games, Dinwiddie seems to be back to his form from last year when he was in talks for Sixth Man of the Year. Since November 8th, Dinwiddie has averaged 23.8 ppg. With Irving missing the next couple of games, Dinwiddie has the perfect opportunity to showcase his skills for the Brooklyn Nets.

If I told you that a Charlotte Hornets point guard would thrive given a larger role before the season began, you probably would have thought I was talking about Terry Rozier. However, Kansas Jayhawks product Devonte’ Graham has taken the league by storm to begin the year. He went from averaging 4.7 ppg, 1.4 rpg and 2.6 apg to putting up 18.2 ppg, 7.1 apg and 3.5 rpg. In his rookie year, Graham averaged just 14.7 minutes, but now he is playing 33.0 minutes. He has even hit some impressive shots in the clutch:

Predicted by many to have a breakout year, Zach LaVine is taking his game to another level. Currently shooting a career-high 40.2% from three-point range, LaVine is turning in an impressive start to the season. On November 23rd, LaVine turned in 49 points and 13 made three-point field goals, including this game winner:

The Cleveland Cavaliers frankly don’t have much going for them this season. At this point, the Cavs need to wait one more year before Tristan Thompson ($18.5M), Brandon Knight ($15.6M) and Jordan Clarkson ($13.4M) are all free agents. If the Cavs are able to trade 31-year-old Kevin Love, they will have a lot of cap room to sign big free agents and/or reload with draft picks for the future. With Cedi Osman (24), Collin Sexton (21) and Darius Garland (20) earning a combined $14M, Cleveland looks like a team priming itself to contend in a few years.

The Detroit Pistons have a lot to figure out with the direction of their franchise. Should they re-sign Reggie Jackson? Should Blake Griffin, Andre Drummond, or both be traded? At 5-11 with their current roster, and just a few games out of having the best odds at the number one overall pick, the Detroit Pistons may be wise to look to the future. Lamelo Ball, Cole Anthony, and Nico Mannion all look as though they could immediately fill the void for Reggie Jackson and the Pistons could direct the $18M freed up by Jackson’s departure on a small forward for next year.

Indiana Pacers: Brodgon and Sabonis are holding down the fort

The Indiana Pacers currently sit at 9-6 and hold the sixth seed in the Eastern Conference, despite Myles Turner’s high ankle sprain that has kept him out almost one month and Victor Oladipo still unsure about his return. Malcolm Brogdon has filled in nicely for Oladipo, with 19.2 ppg, 8.2 apg and 4.5 rpg, while Sabonis has picked up the slack for Turner, with 19.1 ppg, 3.6 apg and 13.4 rpg. The Pacers will be hard pressed to catch up to the Philadelphia 76ers in the standings, but they are certainly capable to distancing themselves from the Brooklyn Nets.

Everyone had a general idea of what Kentucky star Tyler Herro would bring to the table for the Miami Heat. His shooting and playmaking abilities have shined for the Heat, who find themselves in the thick of the race at the top in the Eastern Conference and are tied record wise with the Boston Celtics and Toronto Raptors for the two seed. However, the rookie that has impressed everyone and taken the league by surprise is none other than Kendrick Nunn, who is scoring 16.8 ppg after going undrafted in the 2019 Draft.

We all know Giannis Antetokounmpo can score, pass and rebound at unprecedented rates. The one knock on the Greek Freak has been his shooting; particularly from three-point range. While Giannis is only converting 29.2% from long range this season, don’t let the percentage fool you, because he is turning a corner. At one point this season, Giannis made a three-point shot in eight straight games. Even if he only ever shoots 33% from deep, it will be enough to force defenses to follow him outside which, in turn, makes things easier for Giannis to get to the paint, where he scores at rates equivalent to Shaquille O’Neal.

The New York Knicks may be dead last in the Eastern Conference at 4-13, but something still seems different this year. Last season, there seemed to be an attitude on the team that they needed to roll over and wait for their savior in free agency. After being passed over again and again by the league’s best free agents, it seems many of the young Knicks have taken matters into their own hands and are trying to right the ship themselves. Despite the awful record, the Knicks have been in a lot of close games this year: they lost to the Brooklyn Nets by four (and again by two), Boston Celtics by two, Dallas Mavericks by four (and again by three), and the Charlotte Hornets by one.

Orlando Magic: Defense is for real

The Orlando Magic may not be able to score the ball well and rank 29th in total offense (averaging 102.1 points), but they play incredible defense. The Magic rank third and only surrender 102.9 points per game. The Magic have held opponents like the Denver Nuggets to 91 points and Philadelphia 76ers to 97 points. If Orlando can either sign or draft an offensive talent to score the ball, they will be a dangerous team in future seasons.

The Philadelphia 76ers began the season in a tier with only the Milwaukee Bucks as favorites to win the Eastern Conference. The 76ers have the length, physicality, and while their three-point shooting leaves something to be desired, they still have guys who are more than capable to carrying the team in that aspect of the game. And now, they may have one more guy who can shoot from deep? That’s right. The long-awaited moment finally arrived for Ben Simmons, who has been the butt of jokes league-wide for his absolute refusal to attempt three-point shots. While he has a long way to go to become a player worth guarding from outside, it must have been a moment of relief for the young point guard to do this:

Many believed the Toronto Raptors would take a massive step back after losing Kawhi Leonard and Danny Green in free agency. However, it seems the development of Pascal Siakam timed out brilliantly with the departure of Leonard. Siakam is putting up 25.7 ppg, 8.5 rpg and 4.1 apg. The Raptors also lean on veterans Kyle Lowry, Marc Gasol and Serge Ibalka and can also turn to young workhorses such as Fred VanVleet, Norman Powell and OG Anonouby. Toronto, predicted by some to finish as the eighth seed or worse, finds themselves locked in a battle with the Boston Celtics and Miami Heat for the second seed in the Eastern Conference.

Rui Hachimura made history when the Washington Wizards selected him with the ninth overall pick in the 2019 NBA Draft, as he became the first Japanese-born player selected in an NBA Draft. Hachimura’s game can obviously improve in three-point shooting, but overall, his game is balanced. Able to get to the rim in both the halfcourt offense and transition, Hachimura currently shoots 50% from the field and, in 26.8 mpg, he had a fairly impressive stat-line of 12.9 ppg, 5.3 rpg, and 1.6 apg. For a 21-year-old whose game wasn’t truly NBA-caliber until his late teens, Hachimura is already looking like a solid prospect and, if he continues to develop, a player who could be a staple of the Wizards for years to come.