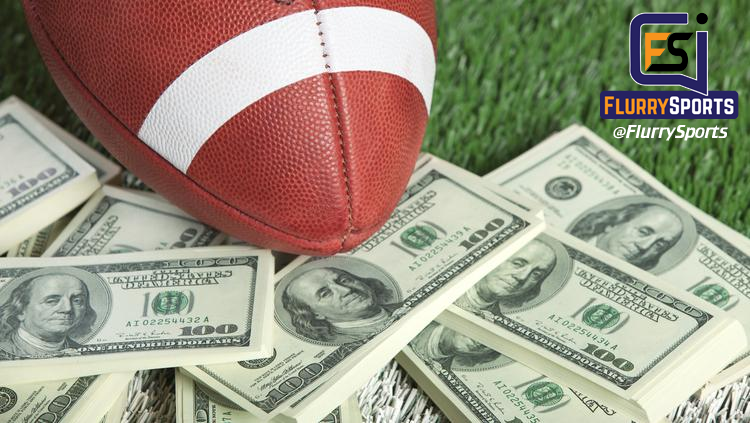 If you want to win big in NFL DFS on DraftKings, FanDuel or any other gambling site, you need your roster to extremely outperform projections. Each week for FlurrySports, I put together NFL DFS projections for DraftKings and FanDuel. While these projections are meant to be a baseline, we can use them to help determine our best plan of action to falling into a boatload of money.

Disclaimer: GPP’s/Tournaments are extremely top heavy on the cash payouts, so I recommend you back up your tournament entries with solid bankroll management and a higher volume of safer cash game entries.

Last week, we saw a Pat Mahomes, Travis Kelce, JuJu Smith-Schuster, Jesse James stack win more money than you could ever hope at your nine-to-five for the next thirty years. I would not be helping you much if I did not explain why this worked. In my spreadsheets, I have a handy chart for you to aid in roster construction. It shows how each roster spot correlates with each other in fantasy point production.

As you can see in the chart, Mahomes and Kelce highly correlate with each other (QB/TE). On the flip side, the opposing WR2 and WR3 also correlate with Mahomes. The prices on these players last week were very affordable to make a stack happen. I had Mahomes, Hill, Kelce and Brown. Had I only swapped Brown for JuJu, I would have been writing this from my hunting cabin in the heart of Wisconsin “Big Buck Country.” Instead, I’ll just stick to hoping I hit it big this week with you.

Let’s lead you into some higher winnings this week with the following stacks.

This is the game you stack six ways from Sunday. Stack Big Ben with his receivers, James Conner, or both. On the flip-side, sprinkle in TB receivers. You’ll need those points if this thing is a shootout like Vegas thinks it will be. I would also make lineups stacking the other side of it, with Ryan Fitzpatrick and his receivers. Bring it back with a positive roster correlation with JuJu, Brown, James Conner, or a pairing of them. Stay away from the defenses in this game, obviously. They will not help you. Fitzpatrick is actually my favorite quarterback of the week. The wheels should not fall of the ‘home-underdog” QB. He will need to keep chucking it in a fast-paced game and it will be a fun one to watch.

See below for a sample to give you an idea of where your salary will be distributed on DraftKings with this roster stack. (Don’t worry. I will list some punts for you at the end of this article to aid in salary relief.)

Guys…Matthew Stafford is a 6.5 point underdog at home in a high total game. He’s $5,900 on DK and $7,400 on FD. Stafford is way under priced in my opinion if this game flows the way I think it will. New England might jump out to a lead, but the inside knowledge of Matt Patricia and the Patriots play-calling might actually help us here, while Vegas is so down on them. Stack this baby with a Stafford, and a mix of Marvin, Tate, Golladay, Riddick (19 targets already), or even Willson. Bring it back with James White, Chris Hogan, and Gronk as options. If Detroit can hang, then this will be the lower-owned stack of the first two games I discussed. Cha-ching.

See below for a sample to give you an idea of where your salary will be distributed on DraftKings with this roster stack.

A lot of narrative in this one. Alex Smith is now a Redskin and has always been paired with Rodgers in talks. Both seem to elevate their game when playing against each other. The same strategy applies to this game, as the others in this article. Stack it six ways from Sunday. Rodgers and his receivers, along with the likes of Chris Thompson on the other side of the ball. It’s no secret that I am a Packers fan, but they cannot cover running backs in the passing game, and with his massive 21 targets on the season already, Thompson will have a heavy PPR workload again in this game. If you use Alex Smith as your QB, still pair him with Thompson. I recommend using a TE, since GB cannot cover them either. Bring it back on the other side with Davante Adams, Graham, or Cobb. Even Allison could get you some paydirt. On the record, I feel this game is going to go over the total Vegas put out for us, so load it in all ways you can think of loading.

See below for a sample to give you an idea of where your salary will be distributed on DraftKings with this roster stack.

Punts for the Promised Land

If you want to win a GPP, you need punts. Punts are low salary players that can score far above their value so you can afford the studs of the week. Use these players if you need to save some salary and walk the tight rope.

Ito had nine carries for forty-nine yards as well as a catch last week. This was against a Carolina team that shut Ezekiel Elliott down. This is not Carolina’s front, and this is a Falcons team that will need the low DFS salary running back.

Richard has eleven targets in the first two weeks and a very impatient Jon Gruden as the playcaller. I expect Richard to fully pull back value in a game that has a 43.5 total, with Oakland as the road under dog. As expected, dump passes for days because Lynch will not be pounding the rock versus this Miami front four.

Nineteen targets in two games. Pair that with his coach matching up against his old mentor and we should see the Lions attack the Patriots out of the backfield with a ton of dump passes and misdirection. Theo is a full green play this week for me to load up on high ceiling players.

Strictly redzone targets here and the low salary. The Bears love this kid and he has three redzone targets thus far. Miller also faces a team that is giving up nearly 300 passing yards per game. If he gets in the endzone, he is a beyond solid punt.

To close this week out, I would like to point out that I am heading to the flat state of Iowa for a wedding. It should be a great time, but my Badgers are actually playing Saturday night against the Hawkeyes on the road. I will be at a hotel waterpark Friday night and the wedding reception Saturday night. Little does my wife know, but she is driving the kids and I home on Sunday morning so we can get back home for the Packers game and I can tweak my lineups on the road.

I appreciate the read and your eulogies to close out my existence if my wife does not get out from behind the wheel in time to tweak her fantasy lineups. Yep! We are a football household!

As a gift to you for making it through this article, here is a link to my NFL DFS projections

Beware of Hot-Hand Fallacy and Recency Bias in Fantasy