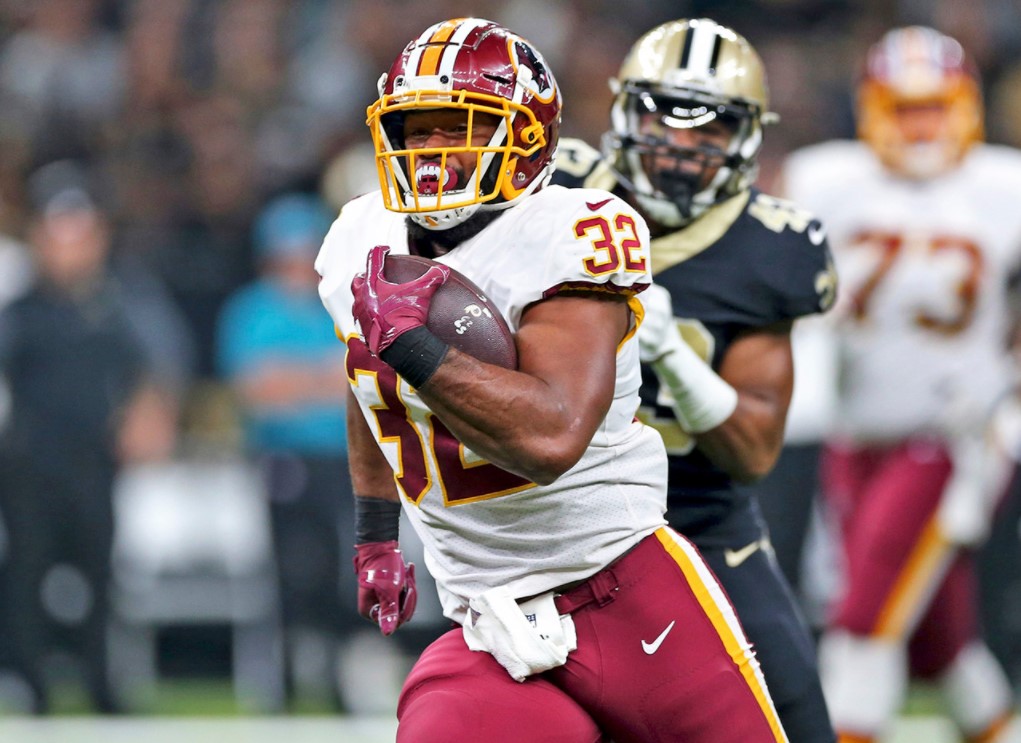 It’s always a nice feeling to know you won’t have guys sitting on your bench without a game anymore. Instead, you can now utilize every spot on your bench to perfect your team heading into fantasy playoffs. At this point in the season, it should be clear to you who is droppable. If you’re unsure, you can always tweet at me @FantasyFlurry to get my two cents. So instead of listing all of the players who I think you should drop, I will be simply giving you a few of my favorite adds this week. Put in your claims, start your guys, eat a slice of pie, and cheer for the Cowboys to lose. After all, it is Thanksgiving.

Let’s take a look at which players I’m thankful to see available on waivers this week. The percentages attached to each player reflects their ownership in ESPN leagues.

Perine has been given plenty of opportunities to succeed this season with Kelley out, but now that Thompson is also out, Perine’s opportunity grows even larger. If you’re struggling to get consistent production out of your RB2 spot, Perine could be that player who puts your team over the top heading into playoffs.

A New England running back who gets consistent work? WHAT?! Surprisingly, this seems to be the case. Lewis has gotten 14+ touches in four-straight games now, and he should hang around that number the rest of the way. Getting this many touches on a successful offense is a big deal, so make sure Dion Lewis is owned.

Booker is now healthy and is stealing touches away from C.J. Anderson. After the firing of OC Mike McCoy this week, who really knows what this offense will look like going forward. It is certainly in the realm of possibility that Booker sees an even larger share of the touches. What I do know is the Broncos do not have a schedule to be afraid of: @OAK, @MIA, NYJ, @NYJ, and @WAS. If you have room for a speculative add, grab Booker.

Coleman is back from injury and just caught six passes for 80 yards against an elite Jaguars defense. While his schedule looks tough, besides week 14 against GB, if Coleman can put up these numbers against Jacksonville, he is capable of doing it against anyone.

Doctson just went for a career-high 81 yards, and now he gets to play the division rival Giants and Cowboys in back-to-back weeks. With Pryor and Thompson done for the season and Reed still nursing injuries, the Redskins need Doctson to step up.

He’s back! Olsen is expected to make his return to the field this week to join a Panthers offense that could really benefit from another pass catcher. Newton gets his favorite target back, and Olsen instantly becomes startable again at the tight end position. Check to make sure he’s owned in your league, because someone may have needed the roster spot during bye weeks.

Are you looking for another way to play NFL DFS every week? Join the highest-rated fantasy football app, DRAFT! Drafts start every couple minutes, so you can enter one right now for week 12!

If you click the picture or this link to sign up and use the promo code “FlurrySports,” you get a free entry into a $3 game! Plus, if you want ANOTHER $5 back, message FantasyFlurry on Twitter to find out how! There’s not much better than free money, so sign up today!