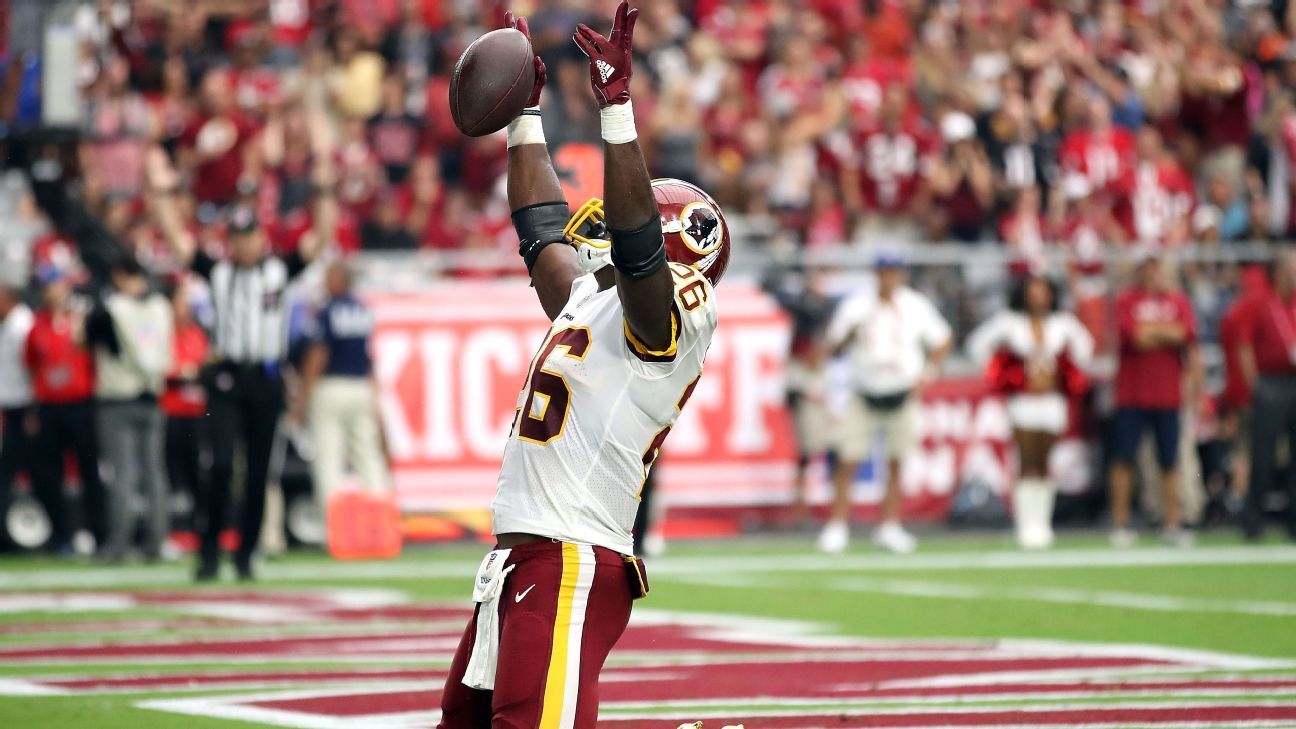 The Washington Redskins faced little resistance in their 24-6 victory over the Arizona Cardinals in week 1. It was the debut of Alex Smith, Adrian Peterson and Paul Richardson, and the return of Jordan Reed, among several offensive linemen. While it’s sometimes easier to analyze when things go wrong, let’s take a second to do a Redskins fantasy football analysis from this victory.

I will be including the snap counts and stats from all of the offensive skill position players. It’s important to make note up top that game flow without a doubt played a factor. After being up by 21 points, I’m sure Jay Gruden felt comfortable leaning on the run game instead of taking shots downfield.

With that point in mind, let’s take a look at how things played out individually in week 1.

We can keep this relatively short. Alex Smith made his Washington debut and found plenty of success. He completed 70% of his passes, scored twice and didn’t turn the ball over. However, he did put it on the ground twice. We don’t usually talk about fumbling issues with quarterbacks, and it shouldn’t be an issue considering his experience, but it’s one to make note of. He performed well against a defense that is better than they looked in week 1. Moving on.

“All Day” Adrian Peterson is back, right?! Well, not so fast. Peterson finished his day with 166 total yards and a touchdown, which without a doubt is a good performance, and those who played him were very happy. However, 70 yards receiving will likely be his season-high. In fact, it was the third-highest of his career. Also, 96 rushing yards is good, but 3.69 yards per carry isn’t great. That average would have been 38th last year, just under Mike Gillislee and Frank Gore. Remember, this average for Peterson comes from what many considered a great comeback game. He’s fine, just lower your expectations.

While Peterson’s rushing average sucked, Chris Thompson is the complete opposite. His rushing average was 13 in this game, which brings his career average to 5.4 (this ties Jamaal Charles). Thompson’s career average yards per reception is 8.8, and average per touch is 6.88. In short, the guy is electric, and he looks fully recovered from his injury. If Washington was playing from behind, we would have seen more of Thompson, but 42% of snaps is still awesome considering they were ahead throughout.

Rob Kelley continues to be one of the least efficient running backs I’ve ever seen, and Samaje Perine was inactive. With everyone in the backfield healthy, Perine will be inactive. If Peterson gets hurt, Perine should slide into fantasy relevance, even if Gruden stubbornly names Kelley the starter. Even he will give in after Kelley trips over the line of scrimmage a few times.

Only four receivers played snaps in this game, and just three received targets. While Josh Doctson played the most, he had the worst performance. He continues to underwhelm for this team. If the trend continues, I could really see Dez Bryant joining the team before they play the Cowboys in week 7.

Paul Richardson received the most targets from Alex Smith in this one, though it didn’t result in a great performance. We can guess the passing game picks up this week against the Colts, but only time will tell. Still, it’s nice to see Richardson playing snaps AND seeing targets. If Smith decides to air it out a bit, Richardson will surely be one of his favorite deep targets.

Jamison Crowder owners may be a bit concerned after this game, and rightfully so. He was the clear top Washington wide receiver to target in fantasy drafts, and we heard so much about the instant connection he and Smith formed. Yet, he played just 62% of snaps. Why? Well, Crowder is just a slot receiver. Because of game flow, Gruden wanted to pound the rock with Peterson, and the best way to do that is with two tight ends on the field. Luckily, I don’t see this team being in such clear control many more times going forward.

It was great to see Jordan Reed healthy and performing well. Let’s cross our fingers that this is a trend, not an outlier. Still, he played less snaps than Vernon Davis, and we see Jeremy Sprinkle played nearly half the snaps as well.

Again, game flow. Gruden wanted to pound the ball in two tight end sets. Jordan Reed is a great player, but not exactly a great blocker. If the Redskins get into a shootout with the Colts this week, we’ll see more Reed, Crowder and Thompson in the game. However, I don’t think Reed will dominate the snap share, since the team is being smart about managing his workload, especially early in the season.