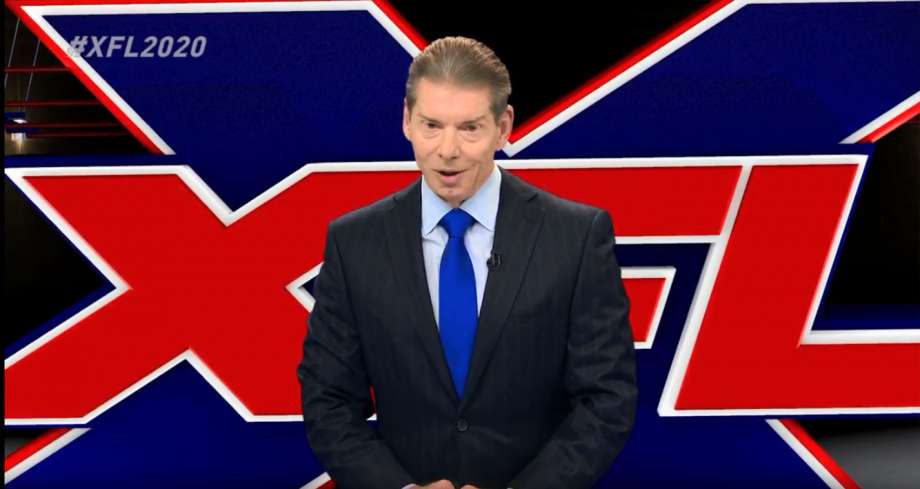 The XFL is back! Well, sort of. The formerly failed football league will be “re-imagined” and officially make its return in 2020, Vince McMahon made the announcement Thursday during a press conference that was streamed on all of Alpha Entertainment’s social platforms.

While the old XFL offered many innovations to the game of football that the NFL adopted, it ultimately was a failing business, so McMahon made sure to address how the new XFL is something completely different from before. In his opening monologue, he explained that he was going to “give the game of football back to fans.” This is a pretty strong statement, but certainly an enticing one after a down year filled with frustration in the NFL.

“We’re going to ask a lot of questions and listen to players, coaches…we’re going to listen to medical experts, technology executives, members of the media, and anyone else who understands and loves the game of football. But most importantly, we’re going to be listening to fans.”

If one thing was abundantly clear from the press conference, it is that McMahon and the XFL will be using the next two preparation years to listen and receive all of the input they can to deliver the best possible product on the field. After the old XFL’s launch, which was basically like a runaway train going off the tracks, it seems as though they are taking a very methodical, conservative approach to launching the new league, which is good.

What Can We Expect?

After McMahon gave his announcement, the questions came in to give us a little more insight as to what we can expect. The new XFL will feature eight teams with 40-man rosters. It will be a 10-game regular season, beginning at the end of January or early February, so right at the end of the NFL season. The postseason will feature two semifinal matchups and a championship game. McMahon also said, “We’ll present a shorter, faster-paced, family-friendly, and easier to understand game.” Their goal is to get their games to last about two hours, which shaves 60-90 minutes off of the NFL’s product. One of the ways McMahon plans to make the game faster is to get rid of halftime.

The biggest issue with the old XFL ended up being the poor performance by the players. It simply was not good football, and McMahon acknowledged that. He explained that was his biggest takeaway from the old XFL experience, and that quality is a huge point of emphasis. Yes, quality of on-field product is obvious, but he continued by saying that the quality of the human is just as vital. To play in the XFL, your record must be completely clean. “Even if you have a DUI, you will not play in the XFL,” said McMahon. So sorry Johnny Manziel, the XFL is just another football league you will not be competing in.

Other features of the new XFL mentioned was how there would be zero crossover in talent from the WWE to the XFL, and the delivery of the games will be the “big screen, mobile devices, and everything in between.” There also was no announcements of potential cities, because they are far away from determining that. Though McMahon said that cities that already have NFL franchises are not ruled out.

Of course, since this was a press conference about something related to football, a question about kneeling during the National Anthem had to come up. In fact, it was brought up three-to-four times. Vince McMahon seemed to make his policy for the XFL abundantly clear: everyone will be standing during the National Anthem, and they can express themselves in other way off of the field. However, it is still unknown if players will be able to express themselves on the field like they did before (i.e. nicknames on the back of jerseys). Anyone remember “He Hate Me?”

All in all, I am extremely excited about this revival of the XFL. If those launching the league are listening to us as much as McMahon promised during the press conference, we should be vocal with what we want and excited for what’s to come. Even if you are not planning to give up your NFL loyalty, this is only good for us fans. The amount of innovations the XFL came up with last time made the NFL a better experience to watch, and also, the NFL may finally have some competition. Goodell may have to take his finger out of his ass and actively try to make the NFL good again.