US Players Getting Ready For World Cup Qualifying 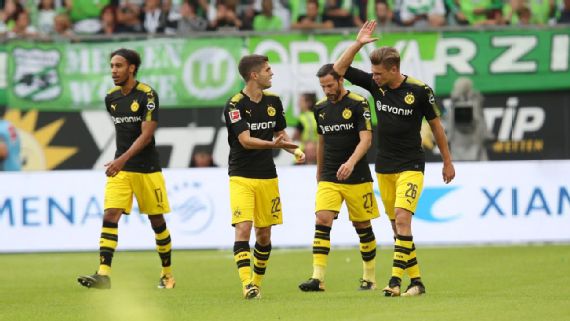 US Soccer is back to qualifying in a little over a week, and Bruce Arena will be announcing a roster soon. He’ll have some guys injured or out of form, so there might be some new faces called in. With all leagues in play now, let’s take a look at who is in-form or out of form.

The hype around the young 18-year-old is skyrocketing every match he plays in, and why shouldn’t it? He opened up the Bundesliga season with a goal and an assist. The whole game, he ran around the Wolfsburg defense (something that is common for the team). Still, Pulisic will head into World Cup qualifiers with a ton of confidence. A positive for Arena was the fact that Pulisic played in the center and outside, in the match. Which means he has options, in terms of where to deploy the young playmaker.

So far, “Deuce” is winning his clash with Father Time. Dempsey scored a penalty in his last game, while also pulling strings in the attacking third with excellent passing. It is good to see that the 34-year-old can score goals and still drop back into the midfield. He leads the Seattle Sounders with goals and is the focal point of the offense. Expect to see some great combinations from Dempsey and Pulisic, next week.

Toronto F.C. has been red-hot, and the US-based players are benefiting from it. Justin Morrow scored two goals for his side recently, but also has been playing solid defense for the club. This is perfect timing for the Morrow, because the left-back spot is up in the air right now (I cringe every time I have to talk about left-back for the United States). Morrow’s international career developing late is better than never.

Timmy has played all 90 minutes in the past two matches, for Eintracht Frankfurt. He played in the backline itself, but also as a right-wing back, which is good considering the defensive injuries the US have right now. With DeAndre Yedlin still trying to get fit from his injury, this could be a chance for Chandler to see time under Bruce Arena.

Again, with all the defensive injury problems, it is nice to Cameron be deployed in multiple defensive positions for Stoke City, over the past year. Cameron is a routine starter for the Premier League side, and is one of the most reliable defenders for the US. He’ll need to continue his form for next week’s qualifiers.

John Brooks is likely to be out for a few months with a thigh injury. Luckily, center-back is the USA’s deepest position, but Brooks was looking to take a major step in his career this year. Now, he’ll have to wait. Hopefully, he can recover and bounce back near winter break.

Part two of three of the defensive injuries for the US. Yedlin is a typical starter for the team, but has still yet to play this season for Newcastle. He is still trying to get fit from his hamstring injury, but I expect Arena to call him in. US medical staff will look at him and see if they can get him healthy in time for the qualifiers. Still, it’s hard to see Arena starting Yedlin after sitting out for a month.

The final part of defender injuries, Johnson was not in the matchday 18 for Borussia Mochengladbach, due to an injury sustained last week. The level of the injury is unknown, and Arena will probably have his staff take a look at him. Again, how comfortable would Arena be playing someone fresh off an injury? Hopefully, its minor and can at least appear in one of the qualifiers.

After a mixed Gold Cup, Gonzalez has not played this month for Pachuca. With Matt Besler playing every week, I expect to see a center-back pairing with Besler and Cameron. Arena really likes Gonzalez, and he’ll get called in. However, it’s hard to see him starting unless a major squad rotation is done from game one to two (which is likely with Arena). Still, Tim Ream playing the past two weeks, could see him above Gonzalez on the depth chart.

Zardes has had a bad run of the games with the LA Galaxy. During the Gold Cup, he did not show major improvements, and at times, looked worse than before. Paul Arrielo and Kellyn Rowe are rising up in the ranks, and Zardes is left fighting for a spot in the squad. He has a lot of experience with the 1st team, and more is expected from him.

A Key Question Heading Into Qualifiers

It has been a frustrating year for the LA Galaxy, and their US-based players. I only mention Jones because he has recently returned from an injury and is still getting back into form. I am curious to see if Arena calls the veteran midfielder in. Jones is a midfield workhorse for the US, but at 35-years old, will Arena elect to move on? No one at the Gold Cup stuck out as his “true successor.” An interesting story line for the upcoming qualifiers is who will line-up next to Michael Bradley? We’ll find out September 1st.