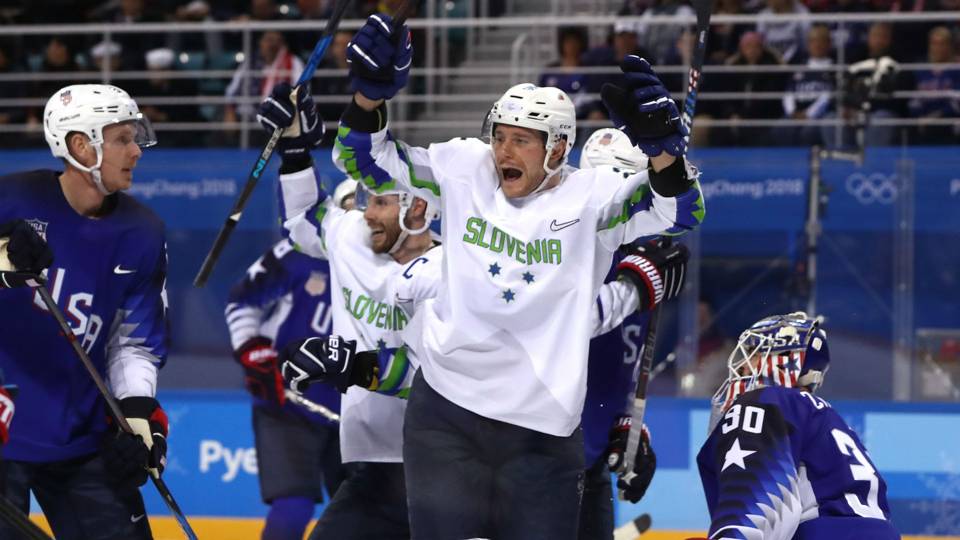 Team USA’s debut in the 2018 Winter Olympics degenerated into a nightmare.

Slovenia overcame a two-goal deficit in the third period, tying the game late and then winning it in overtime for a 3-2 triumph as the men’s hockey tournament began with a pair of upsets.

The other Group B matchup also went the way of the underdog, as Slovakia also overcame a 2-0 deficit to knock off the Olympic Athletes of Russia by the same 3-2 count.

Now the group is turned on its head, and the pressure is ramped up for both the Americans and the Russians going forward.

These looked like dangerous games going in, but for a while, both the U.S. and Russia seemed up to the challenge. Goals by Brian O’Neill and Jordan Greenway had staked the Americans to a two-goal lead after two periods, and Slovenia had managed just 12 shots against the U.S. net.

But then the momentum turned in a big way, after Blaz Gregoric tallied with about 14 minutes left in the game left in the game. From there, Slovenia had the better of the play, finally forging a tie when Jan Mursak scored from right in front of U.S. goalie Ryan Zapolski with 1:37 left and the Slovenian goalie pulled for an extra attacker.

In overtime, it didn’t take long for Mursak to strike again, beating Zapolski just 37 seconds into the extra period.

The Russians fared no better, as a 2-0 first-period lead evaporated as Slovakia went unmatched the rest of the way, with Peter Ceresnak tallying the game winner for the Slovaks.

The U.S. faces Slovakia next in a 9:10 p.m. CST start Thursday. See the full schedule for the men’s and women’s tournaments here.

Switzerland stayed unbeaten in the women’s tournament with a 2-1 triumph against Sweden, and in the process helped goaltender Florence Schelling set a new standard.

With eight career wins in Olympic competition, Schelling now is the winningest goaltender in the history of the women’s tournament. She will look for more in the quarterfinal round Friday as the Swiss face either Finland or Russia.

Schelling and the Swiss defeated Sweden in the Bronze Medal game four years ago in Sochi.