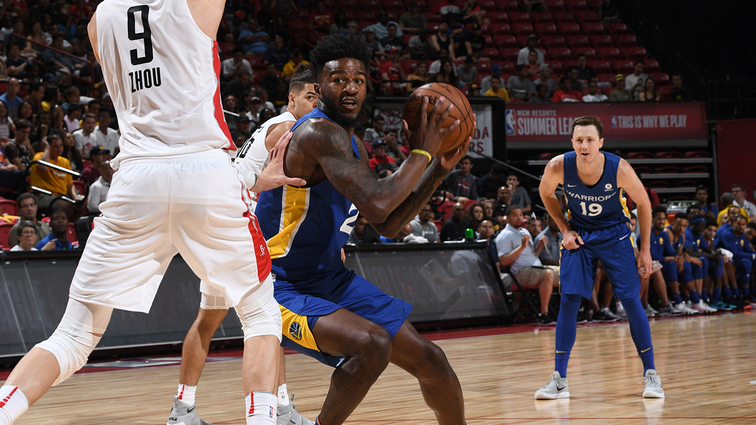 Marcus Derrickson went undrafted out of Georgetown but, after his impressive showing in both the NBA Summer League and the California Summer League, many believe he will make the Warriors roster this season. Last night, Derrickson put up 23 points and 7 rebounds on 8-14 shooting. Derrickson showed he could both shoot the long ball (2-5) and attack the rim and get to the free throw line, where he went 5-7.

Before the draft, Derrickson had stated that he wanted to lose about 20 pounds before the regular season started and drop his weight from 250 lbs to 230lbs in an effort to be more of a versatile player. At 6’7”, Derrickson is at a unique build in that, if he were to weigh 230 lbs, he could guard almost any position on the floor. Reports are that Derrickson is on pace to meet this goal via workouts and and improved nutritional diet.

Many only know RJ Hunter for his buzzer beater against Baylor in the 2015 March Madness Tournament. Hunter has bounced around quite a bit as Houston is his third team in as many years, with Boston being the team that drafted him and Chicago being the team in between. He was the game’s leading scorer with 24 points in the 87-81 Rockets victory. Hunter shot decent from the floor going 8-14 from the field and 5-11 from three-point range. De’Anthony Melton was another standout for Houston, as he poured in 17 points of his own to go along with 5 rebounds and 4 steals.