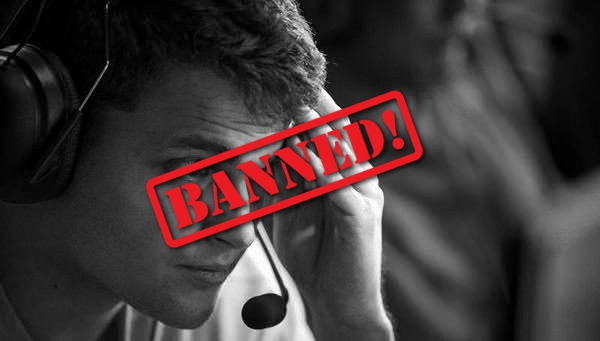 Twitch has banned some of independent streamers recently. If you’ve been living under a rock for the past 24 hours, maybe you didn’t hear or sniff about this. Recently, there is a certain kind of ban wave coming from Twitch. The ban is concerning the right to broadcast ESL One Genting 2018 games. Twitch will temporarily ban any streamer that cast the games from ESL One Genting 2018.

The most recent and renown streamer is Brian “BananaSlamJamma” Canavan, or better known as BSJ. BSJ on his Twitch channel Twitch.tv/BananaSlamJamma that can’t be accessed when this article was wrote, was streaming the overly popular matchup between Natus Vincere and Team Liquid. Suddenly, The streams stopped, and when viewers tries to refresh the page, the channel disappeared. Before BSJ, MLPDota was also getting banned by Twitch. According to MLPDota’s tweet, the streamer is getting banned by Twitch because of ESL has filed a DMCA claim against his stream. English stream aren’t the only ones who got the ban hammer. ESL banned BTSPortuguese for delivering a competition for the official Portuguese stream, which wasn’t active when it happened.

AdmiralBulldog is lucky to not get banned for his meme-y streams. Although, NS, the official Russian caster of ESL One Genting 2018, denounced him harshly. He called AdmiralBulldog a diseased person for pirating the official stream. AdmiralBulldog is responding to this denouncement with his usual funny self. He challenged NS in a one vs one match in a game of Pure reflex, a custom game in Dota 2.

Why is this happening?

Jonas “bsl” Vikan, tournament director of ESL, has made a statement regarding this. ESL stated that they are using Valve’s statement regarding broadcasting rights as guideline to determine the worthiness of someone to get banned. However, due to the vagueness of the statement, the community feels that it is unfair to the independent streamer, like BSJ, who did not use any sponsorship overlay nor promoting any of his sponsor yet he is getting banned nonetheless.

Is this the future where individual talent can’t show their performance?

After the recent ban wave, some streamers are afraid to put their finger on casting a Dota 2 event independently. AdmiralBulldog chose to not continue his stream after he got denounced. But some streamers also choose to rebel against the tyranny. BSJ chose to stream with his teammate monkeys-forever in his stream and will continue to stream using other VGJ.Storm members’ accounts. While this article was being written, Valve has not given any statement regarding the current controversies surrounding ESL One Genting. Who do you think is in the right? How will you deal with the drama surrounding ESL One Genting 2018?