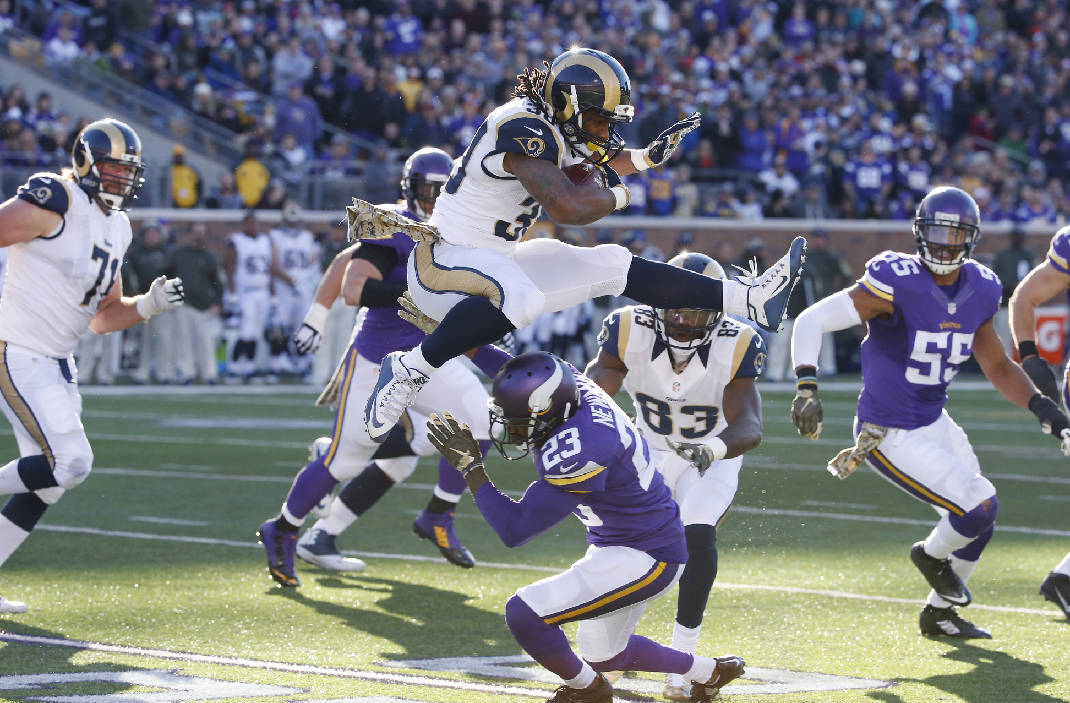 Thursday night’s matchup between the Minnesota Vikings and Los Angeles Rams was probably circled when the schedules came out for both teams. The Rams have been as advertised early this season. Sitting at 3-0, they have outscored their opponents by 66 points through three games. The Vikings are coming off of the surprise of the season, getting dominated at home by the reeling Buffalo Bills. These story lines, plus the plethora of injuries that have occurred on both sides, makes for an interesting game to open up week 4 of the season.

Week 3 was rough for the Rams in terms of keeping their squad healthy. Cornerbacks Marcus Peters and Aqib Talib both suffered lower body injuries against the Chargers. Talib injured his ankle that required surgery to fix. The Rams have decided to shelf him for awhile, placing him on IR. Peters injured his calf muscle and is questionable for Thursday night. Inside linebacker Mark Barron will be inactive on Thursday again, as will kicker Greg Zuerlein.

The Vikings could be without Dalvin Cook and Everson Griffen for the second week in a row. The running game was non-existent for Minnesota last week, so if Cook can’t play, the offense will take another huge hit. Offensive tackles Riley Reiff and Rashod Hill are both dealing with foot injuries as well. Lastly, starting cornerback Trae Waynes went down on Sunday and will be questionable to play Thursday.

Ouch. The injury bug has bit both teams. As always, depth will be key to seeing how each position will be filled on Thursday.

The Vikings were slated as 17-point favorites this past Sunday. From the get-go, the Bills were in control. A roughing the passer penalty kept the Bills first drive chugging, and they ultimately ended up in the end-zone for six. Back-to-back fumbles by Kirk Cousins gave the Bills excellent field position to put them up 17-0. The Vikings offense was nothing short of abysmal for the first three quarters. All in all, this led the Vikings to be trailing 27-0 heading into the fourth.

Was this a fluke? Were the Vikings looking ahead to the Rams, or is this the Vikings team of 2018-19? Some of these questions will be answered on Thursday.

The Vikings offensive line has a difficult job on Thursday night. Michael Brockers, Ndamukong Suh, and Aaron Donald are any offensive lineman’s nightmare. The Vikings line has been suspect, at best, to start the year. Cousins will need stay upright if the Vikings want to compete with the high-scoring offense, led by Jared Goff.

With all of the injuries to the Rams secondary, Cousins and the Viking offense have to exploit the weaknesses that the Rams may have. Adam Thielen and Stefon Diggs need to work their way open to gain big chunks of yards. The downfield passing game was off in week 3 for Minnesota. Cousins, to be frank, was not very good against the Bills. The Vikings will need to score in the high 20’s if they expect to leave Los Angeles with a win.

Jared Goff has been better with each week this season, culminating with a 354-yard and 3 touchdown performance last week. Goff has an abundance of weapons at his disposal. Brandin Cooks, Cooper Kupp and Robert Woods have all been impressive for the Rams this season. With these weapons locked and loaded, the Vikings secondary will need to perform exceptionally. Due to Trae Waynes being questionable, Mike Hughes and Mackenzie Alexander will have their hands full as his potential replacements.

With all of the keys that have been listed above, none of them are more important than Todd Gurley. Gurley already has tallied five touchdowns this season, while racking up 376 all-purpose yards. He’s averaging over five yards per touch on his 73 opportunities this season. Gurley is a monster. The Vikings’ defense was considered one of the best entering the season. They will be tested in all facets on Thursday night.

The Rams will have too much firepower on offense for the Vikings to compete for 4 quarters. The Rams will leave the game at 4-0, winning the Thursday night contest by a score of 30-24.

To place your bets on this NFC matchup, head to MyBookie. If you sign up using the promo code “FlurrySports,” they will match your deposit of $100+ dollar for dollar up to $1,000.