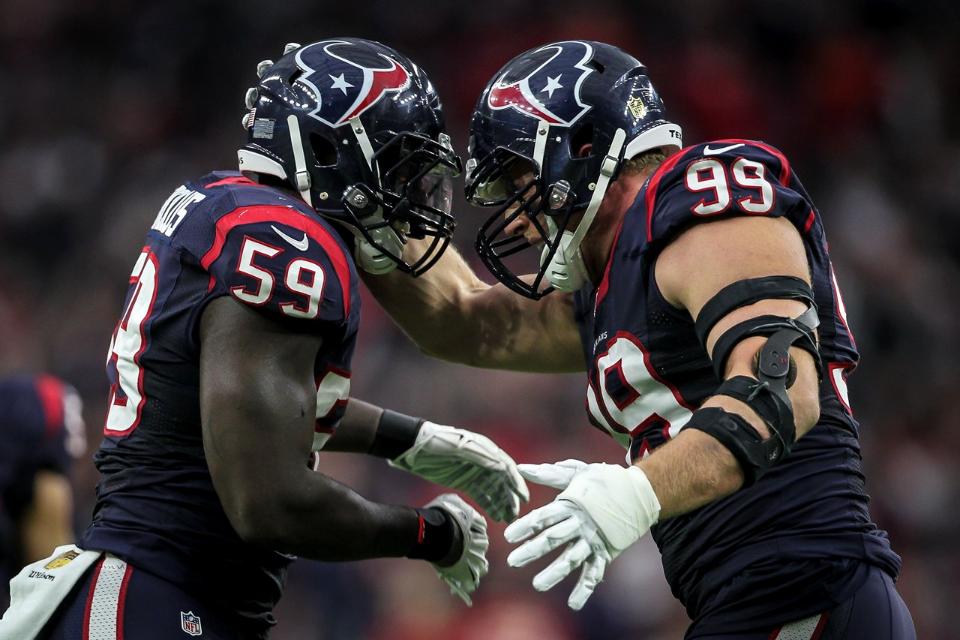 Sunday Night Football was a rough one for the Houston Texans, as they lost more than the game. The ridiculous injury trend across the NFL continued last night with both J.J. Watt and Whitney Mercilus, who both are done for the season.

Three-time Defensive Player of the Year, J.J. Watt, suffered a tibial plateau fracture in his left leg. Watt has proved to be one of the most dominating forces in recent history. “Any time you lose any player, obviously a player of J.J.’s stature, it’s always tough,” Texans defensive back Jonathan Joseph said. Obviously his performance in-game is nearly impossible to replace, but his leadership and presence for this team may be the greater loss.

If there can be a bright side at all, it would be that the Texans have played without Watt for an extended period before. He missed the final 13 games last season, which may be why this is even more devastating for both J.J. and his fans. “I feel terrible for the guy,” coach Bill O’Brien said. “But, with that being said, just knowing him and knowing the type of guy that he is, he’s an amazing human being. He’s an amazing human being and he will work extremely hard to be back, to be back to play for this football team. I know that.”

I can't sugarcoat it, I am devastated.
All I want to do is be out there on that field for my teammates and this city.
I'm sorry.

As if the loss of J.J. Watt wasn’t enough, they also lost linebacker Whitney Mercilus, with a torn pectoral muscle. Mercilus was one of the players Houston had to lean on with the absence of Watt last season. He led the team with 7.5 sacks, and he totaled 12 the year before. The former first-round pick is in now in his sixth season and has seemingly improved every time he set foot on the field. While his injury is unfortunately being overshadowed by Watt’s, his absence on this defense cannot be understated. The Texans will struggle without the hard-hitting Mercilus every Sunday.

Losing one great pass-rusher is tough, and losing two is even tougher. “You’ve still got to step up and play,” said defensive lineman D.J. Reader. “Somebody’s got to go out there and play. Nobody feels sorry for you. The other 31 teams in the league don’t feel sorry for you.”

We here at FlurrySports hate to see players lost for the season, and unfortunately the numbers continue to rise. We wish J.J. Watt and Whitney Mercilus speedy recoveries, and hope Houston can pull together to finish the season strong.