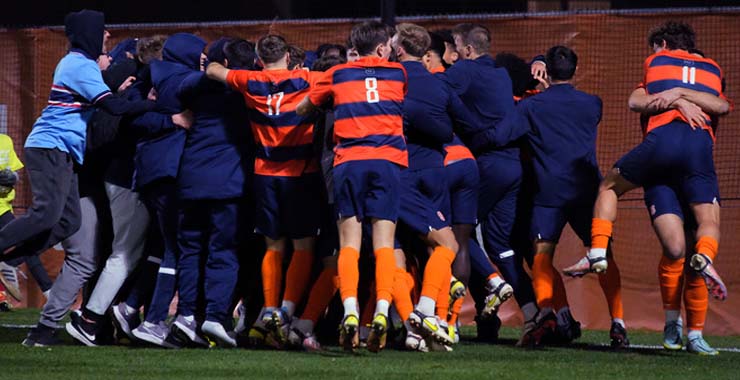 The Syracuse Orange men’s soccer team will share the field with Creighton Blue to determine the finalist for the NCAA Championship tournament on December 9 at  Cary, North Carolina. The No. 3 ranked Orange have been flying high in the tournament as they cruised past the University of Vermont Catamounts in the quarterfinal by defeating them by 2-1. The Oranges have gunned down everyone in their path to secure their place in the semis and they will be looking to go one step further to reach the all-important final.

While the unranked Blue Jays have also had a splendid run to the Semi, winning all of their seven postseason games. If they go past the Oranges, it will be only the second time they will be making an appearance in the finals since 2000. The Blue Jays scored three goals past the best defense of the league, Duke Saturday in the quarter-finals. The star forward Junior Duncan McGuire will be key to their success if they are to make it past the red-hot Oranges. The striker is leading the charts of the top goal scorer as he has carried his tally to 22 for the season.

The Oranges have an overall well-rounded game as they will not depend on the individual brilliance of the players. They will rely on their strong build-up from their back and look to exploit the spaces in between the lines of the Blue Jays.

Here is all you need to know about this exciting semi-final clash featuring Syracuse Orange and Creighton Blue Jays.

How to Watch Syracuse vs Creighton live online and on TV?

The most important phase of men’s soccer season is right upon us as the country’s top team gears up to test the ultimate mettle. You can watch Syracuse Orange vs Creighton Blue live on OolaTv.

You will also be able to stream the match on fuboTV, DirecTV Stream and other live TV services. While cable subscribers will have to first log in to ESPN and catch all the action on their TV sets lying comfortably on their sofas.

WakeMed Soccer Park in Cary North Carolina will be hosting the all-important semi-final between Syracuse Orange and Creighton Blue Jays on Friday, Dec. 9. The kick-off will happen at 6 p.m. ET.

This will be the first meeting between Syracuse Orange and Creighton Blue Jays in the history of the men’s soccer program. Both teams are well-rounded and will look to leave a positive impact when they meet in the field.

Syracuse are (17-2-4) as they have enjoyed immense success this season. The Oranges are ranked 3rd and will be eager

Claim Your Free $1000 Bet For Army vs Navy With Our BetMGM Promo Code
Navy vs Army Prediction, Odds and College Football Betting Picks