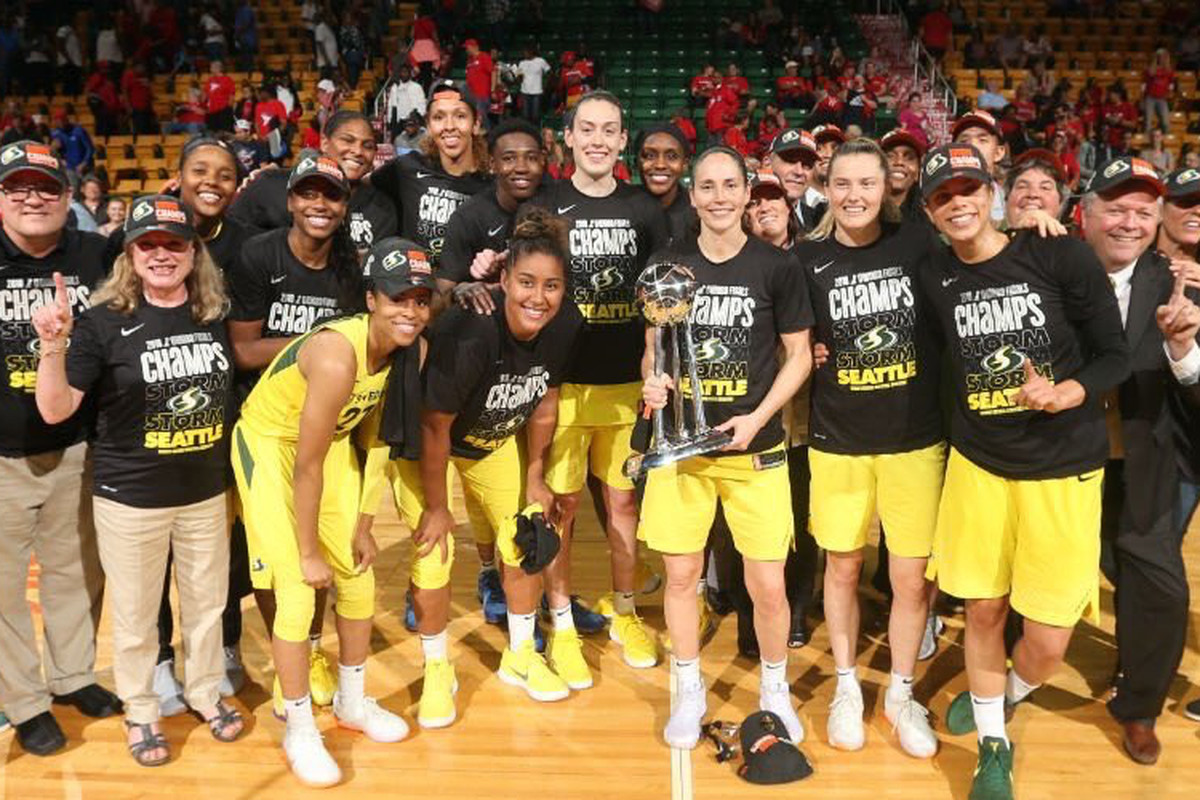 The Seattle Storm pose with the championship trophy after completing a Finals sweep of the Washington Mystics for the third title in franchise history. (Credit: Neil Enns/Storm Photography)

Sometimes, a sports championship is won by the underdog, often with a little bit of good fortune and luck on their side. Other times, no amount of favorable bounces can throw the superior team off their game. The Seattle Storm were the best team in the WNBA all season long. It led them to a number one overall seed in the playoffs. They capped their incredible season by completing a WNBA Finals sweep of the Washington Mystics with 98-82 victory to secure the title.

This is the third title in Seattle Storm franchise history, and their first since 2010. Between that last championship run and this one, the Storm went through plenty of trial and tribulation. 2014 saw them tie for the worst record in the league. They would ultimately turn to youth to dig themselves out of the rough patch. Seattle landed Jewell Lloyd and Breanna Stewart with the number one overall picks in the 2015 and 2016 WNBA Drafts. Just four seasons removed from being at the bottom of the league, the Storm are back on top as champions.

The Game 3 win held right in line with the overall tone of the series, that being domination by the Seattle. After a narrow two-point win at home in Game 2, there was reason to question how the Storm would fare heading to Washington. Throw in the team’s seven-game road playoff losing streak and some fans had to be a little nervous. Any doubt was vanquished quickly. Seattle extended a four-point advantage at the end of the first quarter to 17 at halftime, thanks to a 27-14 second quarter. The Mystics came to play in the second half, but when you are up against as complete a team as the Storm, comebacks are no easy task. All Washington could do is gain one point back in the third quarter and match Seattle’s 29 fourth quarter points as the Storm closed out the 16-point triumph.

The star of Game 3 was very fittingly Stewart, the 2018 WNBA MVP. With her college coach Geno Auriemma in attendance, the former UConn great poured in 30 points to lead all scorers, pulled down 8 rebounds, handed out 3 assists, and even came up with a pair of steals. She was an easy choice for Finals MVP after she averaged 25.6 points over the three games. Natasha Howard scored a career-high 29 points on 11-14 shooting from the floor. She earned a double-double on the night by adding 14 rebounds. Alysha Clark also reached double figures scoring with 15 points while adding 9 boards. 37-year old Sue Bird, the WNBA’s oldest active player, posted a double-double of her own with 10 points and 10 assists. Bird has now been a part of all three championships in Seattle Storm franchise history, having been on both the 2004 and 2010 rosters.

The Mystics were led by Elena Delle Donne who scored 23 points. She added 5 rebounds and 4 assists but was ultimately outdueled by her star counterpart Stewart in this game and in the entire series. Kristi Toliver was just behind with 22 points and 5 assists, but they were the only Mystics to reach double figures. The lack of wholesome offensive production was a big factor in bringing about Washington’s demise.