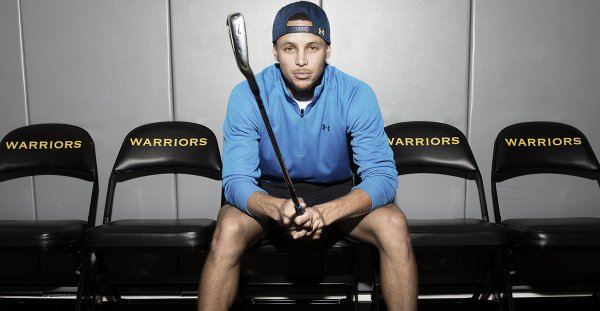 Stephen Curry’s offseason from the world champion Golden State Warriors includes a lot of golf. That’s not unusual, as many high-level athletes from sports have found a passion for hitting the golf course.

This week, though, it gets ramped up a bunch, as Curry has been invited to join the field for the Web.com Tour’s Ellie May Classic at TPC Stonebrae outside San Francisco.

Needless to say, it’s a big step up in competition for Curry, going up to what is one of the top three professional golf tours in the world. Even though his golf handicap of about 2 makes him a high-level amateur player, he’s now going against professionals who are notches better than that.

“When I was young my dad was just getting into the game as well,” Curry said last month. “And he would take me around. I’d drive the golf cart, chip and putt, learn the ropes, and eventually built up some momentum and a passion and a love for it myself. And I was dragging him to the course type of situation. So anytime you can do something with your dad and have fun, for us, in our family, outside of the basketball gym, is definitely special.”

Reaction has been mostly positive. However, some dislike Curry taking a spot in the field for an event when so many players are fighting week-to-week to get to this level of professional golf.

Reality is, a tournament has a few unlimited sponsor exemptions they can give to anyone. And Curry’s name, no doubt about it, is the biggest in this field. How many outside of diehard golf fans and local residents even knew there was a professional golf tournament being played at Stonebrae this week? Now, it’s an event that is garnering plenty of national attention.

This actually isn’t the first time the event has done this, inviting football Hall of Famer Jerry Rice a couple of times (Rice finished last place each time he competed). But his appearances never created the stir that having one of the NBA’s current stars in the field seems to be this year.

Curry tuned up for this event by finishing 4th in the American Century Championship, a celebrity event played last month. But while he faced other athletes, actors and celebrities there, this will be a significant step up in competition.

It’s likely to be a rude awakening.

Chasing the Golf Dream
Why Does the Eastern Conference Always Suck?