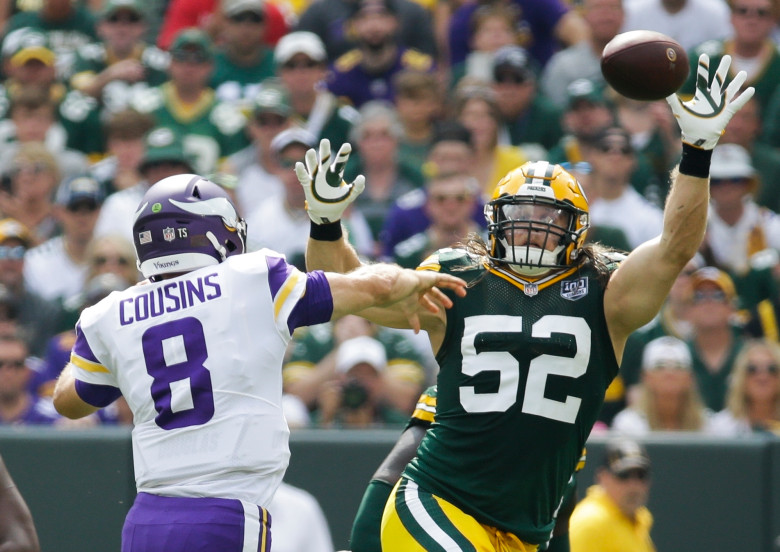 Week two NFL match-ups featured several division clashes, headlined by the border battle that took place in Lambeau. Green Bay was coming off an impressive come from behind victory over Chicago, while Minnesota was looking to build off of their week one victory over San Francisco. There were questions all week long if Aaron Rodgers would take the field, as he dealt with a knee injury suffered in the first half against Chicago. Rodgers also had plenty of fuel to light his fire, as he played Minnesota for the first time since he broke his collarbone at U.S. Bank Stadium last year.

Rodgers in the Gun

While facing the talented defense of the Vikings, it was clear early on that the Packer offense wanted to get the ball out of Rodgers’ hand early. With the quarterback’s mobility in question, keeping a clean pocket for Rodgers was also another focus for the Packers offensive line.

The Packers offensive line was nothing short of impressive early. The running game was wide open, Rodgers had plenty of time in the pocket, and Green Bay took advantage. After Rodgers picked up a 3rd and 7 by running up the middle, he found Davante Adams on a nine-yard pitch and catch touchdown to give the Packers a 14-7 lead in the second quarter. Rodgers finished the first half 12/17 for 80 yards and a touchdown while only being sacked once.

The second half was demonstration of two great offensive game plans. Rodgers picked apart the Vikings defense that was suppose to be stacked, continually attacking linebackers in coverage and throwing right at Trae Waynes. He was able to move the pocket consistently and find his targets with pinpoint accuracy. Rodgers finished the game 30/42 for 281 yards and one touchdown. He distributed the ball to all of his targets, led by Jimmy Graham, who finished with 6 catches for 95 yards. Adams and Geronimo Allison both finished with 64 yards receiving, with 8 and 6 catches respectively.

After the early punt that was blocked for the touchdown, the Vikings needed to respond on their second possession to gain some momentum back. Kirk Cousins orchestrated an eight-play, 57-yard drive that was capped off by a 14-yard touchdown pass to Laquon Treadwell to tie the game up at 7.

The offense opened up in the second half for Minnesota. Cousins had himself a game. He was sacked twice, but he found open targets all over the field. With the running game stagnate, Cousins threw the ball 48 times and racked up 425 yards passing to go along with 4 touchdowns. He did throw an interception, however, that went through Treadwell’s hands and into HaHa Clinton-Dix’s hands. Trailing 29-21 with over two minutes remaining, the Vikings went 75 yards in 8 plays that ended with an Adam Thielen touchdown from 22 yards out. After converting the two point conversion, the game was knotted up at 29. The drive was able to continue thanks to a questionable roughing the passer call on Clay Mathews that extended the drive after a Jaire Alexander interception.

Football is a game of three phases. Special teams has the ability to change the outcome of games with one big play, and Green Bay got the special teams break in the first quarter. With Minnesota punting deep in their own territory, Packers wide receiver Geronimo Allison blocked a punt that was recovered for a touchdown to give them an early 7-0 lead.

#Packers get the PUNT BLOCK for the TOUCHDOWN #MINvsGB pic.twitter.com/qFgz1ttJaf

Late in the first half, Minnesota’s rookie kicker Daniel Carlson missed a 48-yard field goal badly, giving Green Bay a phenomenal opportunity to extend their lead heading into halftime. The Packers moved the ball into field goal range and Mason Crosby drilled it to extend the lead to 17-7 to finish the first half.

Let’s cut to the chase here. Special teams decided this game. Cousins was unreal. Rodgers was phenomenal. Both defenses couldn’t put up much resistance to either offense, as they racked up the yards. Here’s the bottom line: Crosby went 5/6 on field goals, missing the crucial game winner to end regulation. Carlson, well, he missed everything. Vikings fans have known the pain all too long, going back to the shank by Blair Walsh that ended their season two years ago. Carlson missed from 49 and 48 in regulation. He had his opportunity to win the game and have all forget about the previous misses. Instead, he misses a chip shot 35 yard field goal that ends the game in a tie, 29-29.