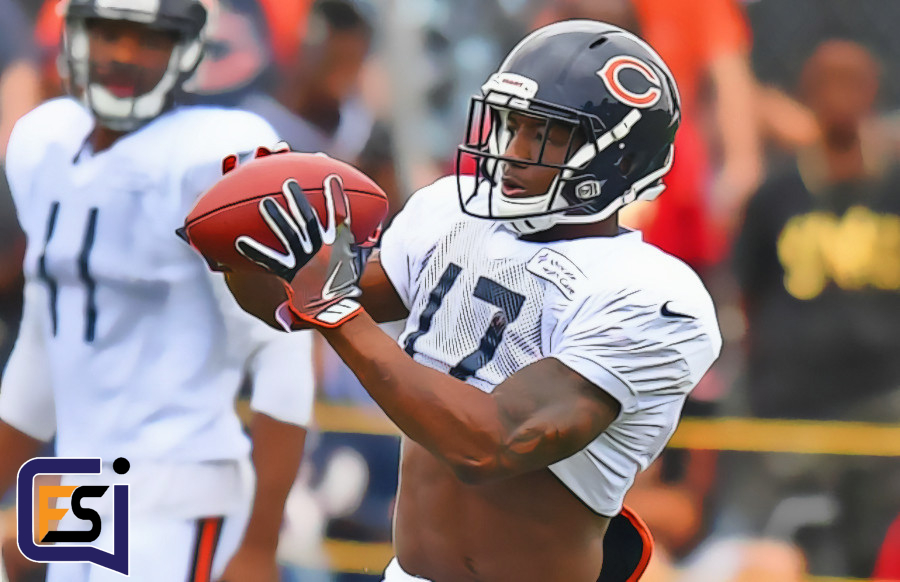 Last year after stumbling out of the gate, my friend Bob beat me to the punch in waiver wire priority and acquired Alvin Kamara, the Saints sensational rookie running back.  He rode that pick up all the way to the championship game.  Every year there are rookie fantasy sleepers that can lift your team from the basement to the penthouse.

Here is a little primer on some names in the middle rounds who may emerge as fantasy superstars.

First round picks from the NFL Draft are expected to produce and be drafted, I will tell you where.  The following sleepers are worth a late round flier or watch list alert to keep an eye on.  This list is pre-training camp and the inevitable injuries.

Saquon Barkley, 2nd overall by N.Y. Giants.  I place his value just outside the top-10 overall.  His ability to receive rates him higher in ppr leagues, maybe as high as 8th.

Rashaad Penny, 27th by Seattle.  Love this pick by Seattle.  The first sleeper because he enters a running back by committee situation.  I think he will emerge as a star, but it may take until mid-season before that happens.  Not a starter yet, he’s a backup fantasy player to begin season.  Look for him starting in rounds 5-6 of your draft.  Future keeper!

Sony Michel, 31st by New England.  Great pick by the Patriots, Michel is a younger version of Dion Lewis, who was let go in free agency.  He’s another sleeper going into a committee situation.  Michel could be gold for an end of the season push.  Rounds 6-8.

I’m not crazy about the running backs chosen in the 2nd round this year.  Nick Chubb, Ronald Jones II, Kerryon Johnson, and Derrius Guice all have injury or character concerns.  The only one with a clear path to starting is Jones, who I would start targeting in round 5.  Otherwise, look for these guys to be backups and bye week fill-ins.

Royce Freeman, 71st in 3rd round by Denver.  The Broncos released C.J. Anderson, hoping that Freeman takes the job and runs away with it.  Freeman is bigger than Anderson and will finish a lot of drives for the Broncos.  His comparison is LeGarrette Blount of the Detroit Lions, and should replicate Blount’s ability to find the endzone.  Target Freeman as early as the 4th round if he is getting starters reps in the third preseason game.

Kalen Ballage, 131st in 4th round by Miami.  Ballage could be a monster for Miami.  At 6’3″ inches tall and an explosive burst that gets him through holes quickly, I think it’s just a matter of time before Ballage is starting for the Dolphins.  His pass-catching ability makes him an every down back, once he learns to pick up pass protecting schemes in Adam Gase’s offense. At Arizona State, he sometimes lined up at quarterback in their “wildcat” offense.  Dolphins traded Jay Ajayi last season, and let backup Damian Williams sign with Kansas City.  They replaced Williams with 35-year-old Frank Gore for insurance and will start lightly-used Kenyon Drake, who had two decent games a year ago.  Ballage is just one Drake injury or fumble away from being the starter.  Target in rounds 10-12.

Nyheim Hines, 104th in 4th round by Indianapolis.  Most observers don’t believe Hines has the size to be an every down back in the NFL.  At 5’8″, they may be right.  But at 200 pounds and possessing 4.38 speed, they may be wrong.  In the open field on the turf in Indy, the track star will be a load to bring down for any cornerback or safety.  With former Eagles offensive coordinator Frank Reich, now Colts head coach,  calling plays, and only Marlon Mack ahead of him on the depth chart, Hines will get plenty of touches as Mack’s backup as a safety valve receiving option for Andrew Luck on third downs and in two-minute drills.  Hines will be worth a flier in ppr leagues and should be targeted late in drafts, starting in round 10.

Receivers are the bane of any fantasy player’s existence.   Health alone makes you want to pull your hair out.  Anyone who had Julio Jones a few years ago when he was “questionable” every week knows what I’m talking about.

It’s nothing like drafting Odell Beckham Jr. and having your season go up in smoke immediately.  Or having Jordy (injury) Nelson, with or without Rodgers, UGH!  Or maybe buying into the promise of Cameron Meredith becoming the Bears go-to receiver, only to see him go to injured reserve.  Wait, I had all three of them.  How did I make the playoffs?  Oh, that’s right, I flipped Jordy for Keenen Allen, who hadn’t done crap all season when I acquired him.  However, I saw his schedule getting easier, threw in a running back and voilà… playoffs!  Thanks Glenn!

That being said, rookie receivers are even worse.  The slash lines of last year’s first-round picks for the entire 2017 season:

I would only consider drafting Moore, who should become an instant starter next to Devin Funchess for the Panthers.  At 6-feet tall and possessing 4.4 speed, Moore should be no worse than a WR3, catching in the neighborhood of 70-80 catches for the year.  That is an average of five catches per game from Cam Newton.  If Moore is able to get that many targets and receptions, there is no reason he can’t take eight of those to the house.  I would consider drafting Moore at around the 9th round, possibly sooner depending how quickly your favorite receivers come off the board.  If you’re like me, there are certain receivers you don’t touch, they have name recognition only.  Let someone else draft them.

Ridley is insurance for if, or when, Julio Jones gets injured or sits out in a contract dispute.  Otherwise, he’s a #3 receiver, who may get 40-50 catches.  Someone will draft him, just make sure it isn’t you.  Just watch him on the waiver wire when you need a bye week pickup.

All six of the wide receivers taken in the 2nd round went to teams with a definite need at the position, and most of them to teams with better quarterback situations than their teams had a year ago.  They are all going to have production on par with the average veteran #2 and #3 receivers in the league.  Team owners can expect production slash lines of 45-55 receptions, 600-800 yards and 3-5 touchdowns for Courtland Sutton, 40th by Denver, Dante Pettis 44th by San Francisco, Christian Kirk, 47th by Arizona, and James Washington, 60th by Pittsburgh  I would target them as #4 or 5 receivers on your fantasy teams, starting in rounds 12 or 13.  They will be able to start during a bye week or in case of injury.

The remaining two receivers from the 2nd round, Anthony Miller, 51st by Chicago and D.J. Chark, 61st by Jacksonville, have the potential to reach even greater heights in their rookie seasons.  First, they are probably two of the most talented receivers, not just in this draft, but in the last four drafts.  Secondly, each of them went to a team with a serious need for a game changing receiver.  Third, they have the talent, toughness and drive to emerge during the season as the real pass-catching stars of their respective teams.

Miller probably has the easiest path.  The minute he steps on the field for Chicago, he will command the most attention from second-year quarterback Mitchell Trubisky.  I know the Bears made a big free-agent splash by signing Allen Robinson, who is coming off a knee injury he suffered a year ago for Jacksonville. But top receiver Robinson may start slow because of the injury.  The interception averse Trubisky will instead target Miller.  He has a fearlessness about going over the middle and runs like a running back with the ball in his hands.  If Kendall Wright got 59 catches for 614 and 1 touchdown a year ago, Miller should be good for 70-80 catches, 750-1000 yards and at least 5 touchdowns.

Chark has the highest upside of all the receivers this year, but is saddled with the quarterback with the most pressure and suspect talent.  If Blake Bortles proves that last year was another year of growth for him, Chark may be the key to Jacksonville advancing to the Super Bowl.  Chark has only a knee recuperating Marqise Lee, and Donte Moncrief, who had an abysmal contract year for the Colts last season, ahead of him on the depth chart.  Right now, the Jaguars are bringing him along slowly, but it’s going to be nearly impossible for them to keep Chark’s speed off the field.  Keep close watch on Jacksonville’s preseason to monitor Chark’s progress.  He could be their top receiver before the season is over.  I would target Chark in the last couple rounds.

DaeSean Hamilton, 113th by Denver.  He’s quite possibly the most underrated receiver in the draft.  A route technician with great hands, Hamilton is the future in Denver.  Last season, Denver lost both Demaryius Thomas and Emmanuel Sanders at times during the season.  Now the Broncos have drafted Courtland Sutton, previously mentioned, and Hamilton to be the future.  If the Broncos have injuries like last year, the future is now.  Hamilton will otherwise be buried on the depth chart.  A waiver wire pickup only, he is someone to keep an eye on.  I have hi projected for 30-40 catches, 500 yards and 2 TDs.  Production will go much higher if injuries beset the Broncos!

Equanimeous St. Brown, 207th by Green Bay.  The steal of the draft?  Yes.  At 6’5″ and a blazing 4.48 speed, the Packers have unearthed the next Martavis Bryant, but without the crazy.  Notre Dame’s passing game has been dreadful the last two seasons, but can’t fault St. Brown for that.  He has an enormous catch radius that Aaron Rodgers is going to love.  St. Brown needs to get stronger and needs to run better routes, but he’ll be coached well by the same team that has turned an awful Davante Adams into a Pro Bowler.  It will be late in the season, but St. Brown will make an impact for the Packers this year.  30-45 catches for 500 yards and 4-6 TDs.