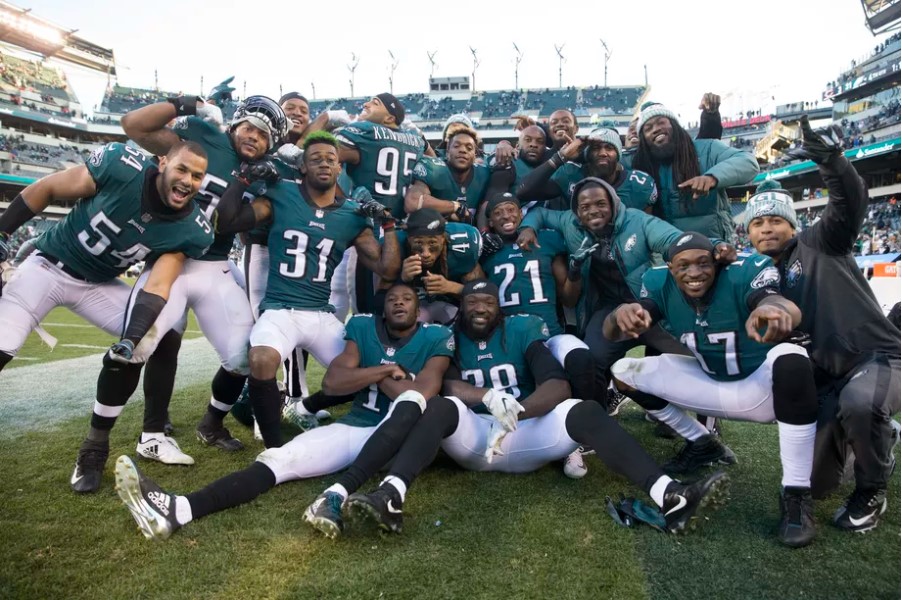 With another week in the books we preview another division. This time we are tackling the NFC East division, which appears to have already been decided by the dominant play of the Philadelphia Eagles. Of course for those who are unfamiliar with the division, it includes the Philadelphia Eagles, Dallas Cowboys, Washington Redskins, and New York Giants. These predictions are based on remaining schedule, injuries suffered, suspensions served (Zeke), and current level of play.

My-oh-my what a difference a year makes in the NFL for Carson Wentz. After an up and down first year, Carson Wentz has now become the frontrunner to win the MVP award. This along with a plethora of weapons at his disposal and a top rated run defense has led them to an NFL best 10-1 record. The remaining schedule for the Eagles includes matchups against two teams at or above the .500 mark. These games are against two NFC West opponents, the Los Angeles Rams and Seattle Seahawks. While they may prove to be tough opponents, the Eagles have looked to be in a different league then everybody since their week two loss against the Kansas City Chiefs.

Right now, their toughest opponent looks to be the Rams, who just responded from a slacking by the Minnesota Vikings defense with a win over the Saints. If they can beat the Rams, there’s a good chance for the Eagles to run the table and end up with a one-loss season.

Best-Case Scenario: Eagles go 15-1, win the division, and get the first seed in the NFC.

Worst-Case Scenario: Eagles go 12-4, still win the division, miss out on a first round bye.

Injuries, injuries, and more injuries has basically been the story for Redskins this entire season. The offense has been completed decimated by injuries to the offensive line and many of the starting offensive skill positions. That, coupled with one of the leagues toughest schedules, has led to a very underwhelming year for the Skins. Perhaps the lone bright spot of this team has been Kirk Cousins, who statistically has had a great year and has almost single handedly kept them in the wild card race. Looking at the remaining schedule, we see that the Redskins actually have one of the weaker stretches of games in the league, and don’t face a single team with a winning record. While the Redskins are still in position to get a wild card spot, the injuries may too much to overcome.

The Redskins have to beat out the likes of Carolina, Atlanta, Seattle, and Detroit for a wild card spot, and while anything is possible in the National Football League, the likelihood of them beating out these much healthier teams is definitely a long shot.

Worst-Case Scenario: Redskins injuries continue to hold them back, they go 8-8, and miss the playoffs.

The Dallas Cowboys are literally a real life soap opera. If there isn’t talk of Ezekiel Elliott being suspended, there’s talk of Jerry Jones vs. the other owners vs. Roger Goodell. The Cowboys look to be a far cry from the dominant force we saw last year, and all of the rookie magic that Dak Prescott wowed us with seems to be nonexistent without his buddy Zeke toting the rock behind him. The last three weeks, the Cowboys have scored a total of 22-points and have given up 27+ in each of those losses. With Zeke still sidelined for another three weeks, it’s hard to see this team making any push towards the playoffs. The remaining schedule includes a few winnable games, but with the way this team has played recently, don’t be surprised if they can’t even beat the 2-9 New York Giants.

While mathematically the Dallas Cowboys are still in the hunt, the Cowboys appear to have given up after the Elliott suspension. Even if the Cowboys survive until he returns, tough matchups against the Seahawks and Eagles might prove too much to overcome.

Best-Case Scenario: The Cowboys survive without Zeke, Zeke provides a spark against the Seahawks and Eagles, and sneak into wild card.

Worst-Case Scenario: The Cowboys short run of being division champs is over, Dallas loses remaining games and miss playoffs.

When it rains it pours, as they say when things just continue to go wrong, has been the story New York Giants entire season. After losing a string of close games early in the year, the Giants lost four wide receivers for the season, including superstar Odell Beckham Jr., in a week five matchup against the Chargers. Additionally, one of the most improved defenses from a year ago has ranked in the bottom ten in most defensive categories this season. Perhaps the only silver lining is that the Giants will have a very high draft pick to draft a replacement for the aging Eli Manning and move in a new direction.

Best-Case Scenario: The Giants lose out and receive the number one draft choice some how.

Worst-Case Scenario: The Giants win a few more games and ruin their chance at a top five pick.