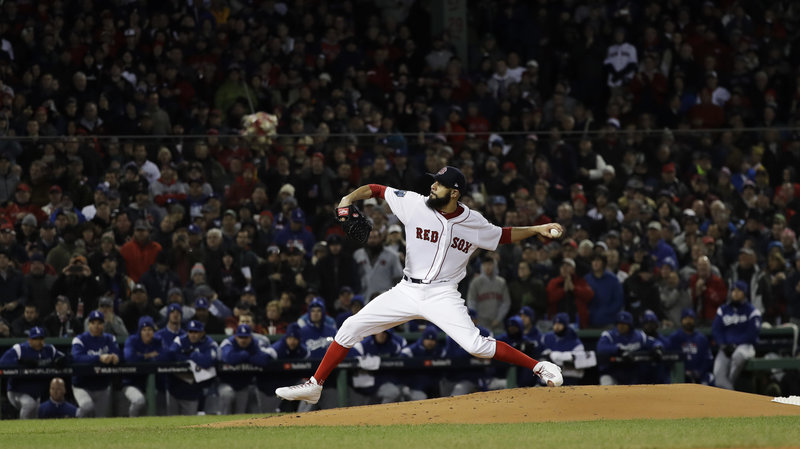 The Boston Red Sox are showing everyone that their 108-win season was no fluke. Following impressive victories over the New York Yankees and Houston Astros in the ALDS and ALCS respectively, the Red Sox have gotten their first World Series appearance since 2013 off to a perfect start by taking Games 1 and 2 over the Los Angeles Dodgers. After producing 8 runs on 11 hits in the Series opener, the Red Sox followed it up with superb pitching in Game 2 and some timely two-out offense to come away with a 4-2 triumph.

The story of the night was Red Sox starter David Price. The knock against the hard-throwing lefthander has always been his inability to perform in pressure situations, i.e. the postseason. With the bright lights of October shining on him, Price stepped up in a big way in Game 2. He allowed just 2 runs on 3 hits over 6 innings of work, striking out 5 and walking 3. The Red Sox bullpen has had some question marks around it as well, but there was nothing but answers coming out of it last night. Joe Kelly, Nathan Eovaldi, and Craig Kimbrel retired all nine batters they faced in the 7th, 8th, and 9th innings to slam the door shut. After struggling with control and reportedly tipping pitches in the past month, Kimbrel earned his second save in as many games of the World Series.

There has been no questioning the Red Sox offense all season long. Boston now has 19 hits through the first two games of the World Series after notching 8 as a team in Game 2. The scoring got started in the 2nd inning as Xander Bogaerts smacked a one-out double to center and was plated two batters later by an Ian Kinsler single. The Dodgers clawed out their only two runs of the game against Price in the 4th inning. Considering the inning started with base hits by David Freese and Manny Machado and a walk to Chris Taylor to load the bases with no outs, Los Angeles could’ve done a lot more damage in theory. Matt Kemp plated Freese on a sac fly to centerfield. Yasiel Puig brought home Machado on an RBI single, but it was sandwiched between strikeouts of Enrique Hernandez and Austin Barnes, allowing Price to escape only allowing two runs.

The 2-1 deficit marked the first time the Red Sox trailed in the Series, but it wouldn’t last long. After the first two batters in the bottom of the 5th were retired, Christian Vazquez and Mookie Betts registered base hits. After walking Andrew Benintendi to load the bases, Dodgers starter Hyun-Jin Ryu was relieved by Ryan Madson. Madson failed to escape the jam. After walking Steve Pearce to force in the tying run, prized offseason free agent acquisition J.D. Martinez came through for the Red Sox with a two-run single to retake the lead. Ryu’s final line in defeat read 4 runs on 5 hits with 5 strikeouts and 1 walk over 4.2 innings. The 4-2 score would hold up until the finish.

With the Series now set to shift to Southern California for Games 3-5, the question is how can the Dodgers get back into it? They are certainly up against it, particularly after losing Game 1 in which ace Clayton Kershaw started. The Game 3 starters will be Rick Porcello for the Red Sox against youngster Walker Buehler for L.A. Buehler has been spectacular in the postseason thus far, and he will need to be again on Friday in what is nothing short of a must-win for the Dodgers. The Dodgers bullpen isn’t particularly great on paper, so the longer Buehler can go, the better the odds. The other key for Los Angeles will be generating offense early. The 3 hits they had in Game 2 will not cut it if they are to have any chance. When Mookie Betts has the same number of hits himself as your entire team, your chances aren’t going to be good.

Unfortunately, the trend of the Dodgers not hitting has been a theme throughout the postseason. Through Game 2, L.A. is hitting just .191 with runners in scoring position this October, compared to .363 for the Red Sox. Perhaps some wholesale lineup changes could be coming for Game 3 to jumpstart the offense. According to ESPN Stats and Info, the Dodgers were the first team ever to not start any of its top four regular season home run hitters in a World Series game. Those names are Max Muncy, Joc Pederson, Cody Bellinger, and Yasmani Grandal. Given how good the Boston offense is, it’s fair to expect them to get theirs every night. The Dodgers need to prioritize their own run production to keep pace and hopefully come out of games victorious rather than trying to shut down the Sox bats altogether with lineups that prioritize pitching and defense.

The first pitch of Friday night’s Game 3 is slated for 8:05 p.m. Eastern. Current odds have the Dodgers as favorites at -150 while the Red Sox are +130 underdogs. The spread is currently at -1.5 for the Dodgers. Game 3 can be seen on FOX, the home for all the World Series games.