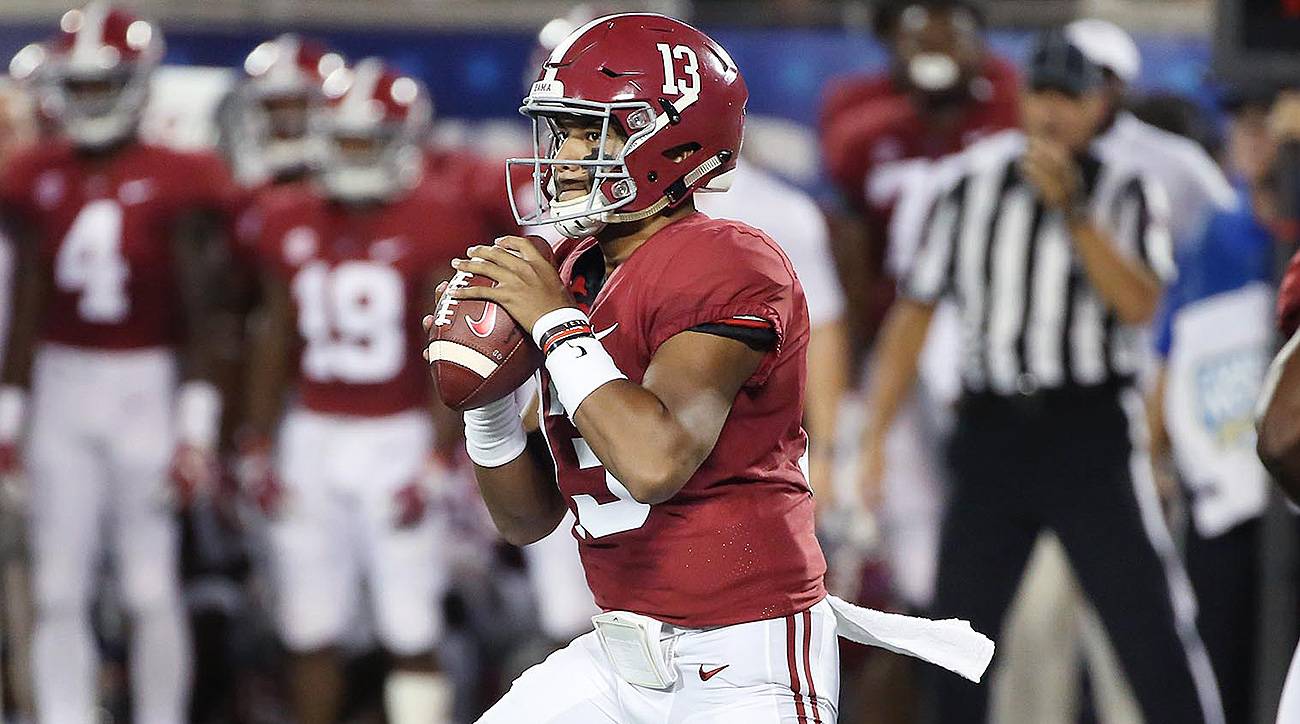 College Football’s opening act for the 2018 season did not disappoint. A wild Week 1 was capped off on Labor Day Night with Virginia Tech earning a relatively easy road victory in surprising fashion over ACC foe Florida State. The opening weekend had plenty to catch the eye. Here is a recap of all the top storylines and takeaways.

Per usual, Alabama looked dominant in its season opening 51-14 win over Louisville. The big question heading into the season opener was who would start at quarterback for the Tide. After declining to reveal his choice all preseason long, Nick Saban went with the more polished passer to start the game in Tua Tagovailoa. He breezed through the Cardinals defense to the tune of 12-of-16 passing for 227 yards and 2 touchdowns. Jalen Hurts did get some snaps in the opener as well. He went 5-of-9 for 70 yards passing and added 9 rushing yards. Viewed as the dual threat option of the two, it is fair to expect Hurts to continue seeing game reps throughout the season. However, Saturday’s opener was essentially a microcosm of what should be expected with Tagovailoa, the true starter and earning the lion’s share of the reps. The other question, of course, is who on the schedule might actually have a shot at taking down the mighty Crimson Tide? As of now, road games at Ole Miss (9/15), and LSU (11/3), as well as the always dangerous Iron Bowl against Auburn (11/24) look like the only reasonable bets.

When Notre Dame blew out Michigan 31-0 in 2014, there was a sad undertone when the clock hit 0:00. No one knew when we would see the next installment of this historic rivalry. Due to Notre Dame’s commitment to play a set portion of ACC schools, there just wasn’t going to be room on the schedule. Fortunately, we didn’t have to wait as long as most expected. With College Gameday on scene in South Bend throughout the weekend, the Irish and Wolverines squared off once again to open the 2018 season. Notre Dame led most of the way, but down by a single touchdown, Michigan got the ball with about a minute to go and a chance to tie the game. A strip sack fumble forced by Jerry Tillery early in the possession was recovered by Te’von Coney to secure the win for the Irish. Notre Dame quarterback Brandon Wimbush produced the best individual stat line on the day with 170 yards passing, 1 touchdown, 1 interception, and an additional 59 yards rushing. Former Ole Miss QB Shea Patterson will have to wait another week for his first Michigan touchdown. He finished with 227 yards passing and a pick.

Outside of Michigan’s tussle with Notre Dame, the other three Big Ten East contenders all had relatively easy opponents in the first week of the College Football season. Of the three, you could have made the argument that Ohio State would have the most difficult test with Oregon State, a Power Five opponent. The reality was completely the opposite. The Buckeyes steamrolled the Beavers 77-31 while Michigan State and Penn State nearly suffered devastating home upsets. Sparty had to survive a test from Utah State out of the Mountain West Friday night, escaping with a 38-31 victory. Less than 24 hours later, Happy Valley held its breath as the Nittany Lions won a thrilling 45-38 overtime game over Appalachian State of the Sun Belt Conference. Penn State actually trailed late in the fourth quarter before going on a tying touchdown drive. After the Mountaineers missed a long field goal to end regulation, Penn State scored on the first possession of overtime. On the ensuing App State possession, QB Zac Thomas took a shot to the end zone but Amani Oruwariye made a spectacular interception, high-pointing the ball to help PSU escape.

While Alabama’s thrashing of Louisville was expected by many, the SEC came up big in some other cross-conference battles over the weekend where, in some cases, they weren’t the popular pick. In the Chick-fil-A Kickoff Game in Atlanta, Auburn essentially had a de facto home game against the top-ranked team of the Pac-12, Washington. It was a tight affair throughout, but the Tigers managed to pull out a 21-16 victory. Jarrett Stidham threw for 273 yards and a TD in the win. With a daunting SEC schedule looming that includes road games against both Georgia and Alabama, Auburn has afforded itself some leeway with this big opening week start. Meanwhile, the Huskies essentially find themselves in a situation of needing to run the table to have a chance at the College Football Playoff, given how underappreciated the Pac-12 is.

In the Sunday night game, underdog LSU simply overwhelmed ACC Coastal Division-favorite Miami, cruising to a 33-17 victory. The Tigers’ physical lines dominated the slighter Hurricane fronts on both sides of the ball and chalked up another impressive win for the SEC in the early going of the season. Miami now also likely finds itself needing to win out to have any shot at the Playoff. A non top-25 matchup Saturday afternoon further helped the SEC set the tone for the season. In the AdvoCare Texas Kickoff in Houston, Ole Miss put up points in a hurry and managed to do an adequate job slowing down the high-flying offense of Texas Tech to earn a 47-27 victory. Jordan Ta’amu was sensational, throwing for 336 yards and a pair of touchdowns while running back Scottie Phillips racked up 204 yards rushing and 2 touchdowns on just 16 carries. Based on Week 1, the notion that the SEC is no longer College Football’s elite conference is entirely false.

When it comes to the Group of Five and the teams with a shot at grabbing the automatic New Year’s Six bowl berth this season, the conversation has to start with UCF and Boise State. Both teams got their seasons off to picture-perfect starts over the weekend. The Knights destroyed American Athletic foe UConn on Thursday night, winning 56-17. McKenzie Milton picked up right where he left off last season when it comes to posting monster stat lines, throwing for 346 yards and 5 touchdowns. Saturday, Boise State took to the road to take on one of the better teams in the Sun Belt, Troy. Many thought they could be ripe for an upset given the cross-country travel and hot, humid conditions. That was far from the case, as the Broncos steamrolled the Trojans en route to a 56-20 win. Quarterback Brett Rypien pulled off a Milton-like stat sheet-stuffing performance of his own, throwing for 305 yards and 4 TDs. Week 2 will see both squads return home. Boise State will get a shot of its own at UConn, and UCF welcomes in FCS opponent South Carolina State.