Quarterback Chaos in Minnesota, Who Will Start in 2018? 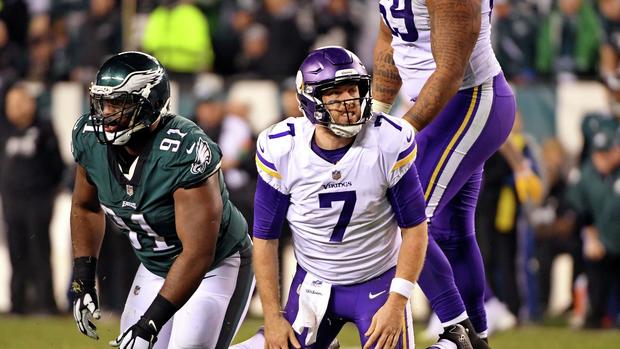 At the end of their NFC Championship defeat against the Eagles, the Vikings had a number of questions on what went wrong after their thrilling miracle a week prior.

One of those questions was what to do with three starting quarterbacks on their active roster.

Case Keenun, Sam Bradford and Teddy Bridgewater have all been under center the past three seasons for the Vikings. While it’s nice to have that quality of depth at the position, sooner or later, someone was going to have to give-way to the other.

Bridgewater, 25, sat behind then-starter Matt Cassel, but soon took over the reigns and was awarded the Pepsi Rookie of the Year. In 2015, Bridgewater led the Vikings to a NFC North Division Title before being upset by the Seattle Seahawks the next week. However, a gruesome injury during a team practice in 2016 nearly cost Bridgewater both his leg and NFL career.

With the Vikings looking to remain in contention in the NFC North, they traded their first-round pick and fourth-round conditional pick to the Eagles for QB Sam Bradford.

Bradford, 30, started all 16 games for the Vikings in 2016, but failed to qualify for the postseason after starting 5-0. Bradford’s knee gave out early in the 2017 season due to two ACL tears in his knee, and was forced to sit out the remainder of the season for precautionary reasons.

Keenum, 30, took over for the injured Bradford and Bridgewater, and had a career season after having lackluster years with the Texans and Rams. Throwing for 22 touchdowns and 3,547 yards, Keenum led the Vikings to a 2017 division championship, and took them all the way to the NFC Championship game.

With the Vikings not franchise tagging either of their quarterbacks, the Vikings almost have to address the position either through free agency or in the upcoming draft. The talent is there on both sides of the ball, and with the NFC North in a state of flux at the moment — Aaron Rodgers returning to the Packers aside — the Vikings has the roster to contend in the NFC.

I guess we’ll have to wait till the new NFL year begins to see how their story unfolds heading into the Summer.

Have a theory on what the Vikings will do? Let us know!