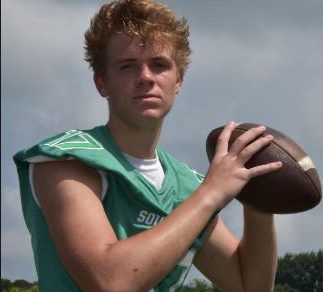 Jamie Diven will take over the South Fayette Lions this season.

Claim To Fame: Diven played football at West Allegheny for three seasons. This is Diven’s first and last season playing high school football for South Fayette. Diven is one of the few WPIAL players that has played for two legendary WPIAL football coaches in Bob Palko (West Allegheny) and Joe Rossi (South Fayette).

What are the expectations for South Fayette this upcoming football season?

“We have high expectations for ourselves. We know we have the talent and grit to get the job done. We’re playing for something bigger than just getting a win. We expect to dominate every play to make our coaches proud. We have a championship team but, we have to put it all together.”

What is fun about playing quarterback?

“The best thing about quarterback is being in control of the whole offense. It’s something special when you’re in the huddle and all other ten guys in that huddle trust you and give you their full attention because they believe in you.”

Out of all the colleges that you have visited so far, which one did you like visiting the most?

“I really like the culture at the University of Buffalo.”

How much of an impact do you think social media has on high school athletes when it comes to getting recognized?

“Social media has a huge impact. You could be a great athlete and coaches could think you’re a bad person. It’s because of the stuff you do in your personal life and you posting it for your friends to see. They don’t want or need that bad energy in the locker room. You need to be careful with what you post.”

Which school do you think South Fayette has the biggest rivalry against when it comes to sports?

“We’re excited to face USC because they’re so close to us and we see those kids all the time in Bridgeville. It’s good to see how we can compete against a bigger team than us.”

Even though the 2018 NFL season has not started, who do you think will win NFL Rookie of The Year next season?

“I really like how tough Saquon Barkley is. I think it will be him.”

Out of all of the Eat’n Park’s, which one at which location do you like the most?

“The one in Robinson.”

If you are given a $100 gift card for a store or restaurant. Where would you want it to be from?

Do you think the Pittsburgh Pirates will make it into the playoffs this season?

“Of course. You have to have faith in your hometown teams.”

“I’m a very upbeat person and I usually like to see the good in people. You’ll never catch me frowning too.”

With Playoffs on Horizon, WNBA is Wide Open
Wings Are In, Storm Secure Top Seed for WNBA Playoffs