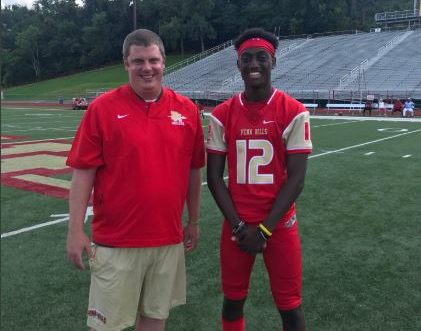 What are the expectations for Penn Hills this upcoming football season?

HM: “Good football, we want to play OUR best football week in and week out. We believe that if we can do that, the rest will take care of itself.”

During your freshman and sophomore year at Penn Hills, Cameron Tarrant was the starting quarterback for your team. What did you learn from him while he was under center?

HM: “Cam was an awesome leader, one of the most calm and collected people and ballers I’ve ever met. He was tremendously generous and I mimic his leadership style now with the team. I’m still trying to copy some of his juke moves, I haven’t gotten those down quite yet.”

HM: “The education, the historical value and the potential the program has as far as football. Also, I love the family like energy I got from the coaches and players, even before I was committed I felt at home. But ever since the commitment, I’ve really felt like I’m already onboard for #MissionsPossible.”

Your football team was in 6A last season and now this year you guys are in 5A this season. Do you think it will be different playing new teams in your section that you did not play against last season?

HM: “Football is football, rather it be 1A or 6A, the best players have to come out every Friday night and play their best football. So, yeah I believe it’ll be different, but we still have to play our game.”

Who is your favorite NFL football player of all time?

HM: “Michael Vick, he was a catalyst for the mobile QB, he didn’t quite invent it, but he really popularized it and gave young QBs like myself someone to look up to. Sometimes athleticism is mistakenly synonymous with slow wits, which isn’t the case for Vick, he’s paved the way for my type of QBs, the Cam Newton’s, the DeShaun Watson’s.”

What’s it like to play for Coach John Peterman?

HM: “It’s like playing for a Penn Hills history book. He has so much knowledge of Penn Hills history and really instilled that pride to be from and play for my community. We’re trying to bring that rich history back to life with the things we want to do this season.”

This season you have a new wide receiver and free safety who is a senior on your team in Corey Thomas Jr., who transferred from Central Catholic. What is your relationship like with him?

HM: “I could probably say Corey is one of my closer friends on the team, we have really gained a bond, the two of us. We live pretty close so we play video games together a lot, and we’ve even started to watch film together because he has such a mind for the game.”

HM: “I’m part of the Penn Hills garden club at my school, I love to interact with the awesome people who do our garden on our school campus, they’re really bright kids who I like to try and learn from, I also like trying to make our community look better with a good looking garden.”

It’s More Than a Wave