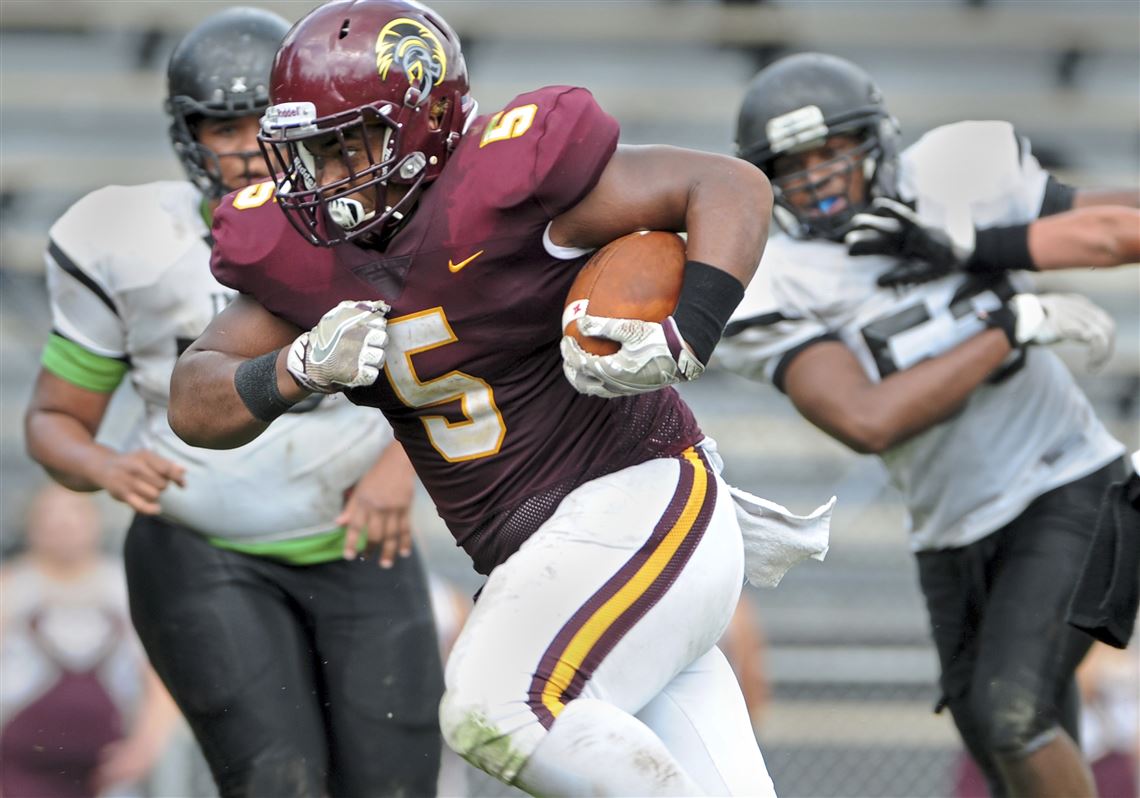 Claim To Fame: Jelani rushed for 1,629 yards last season. He has received offers from colleges such as the Univeristy of Buffalo and others. Jelani was part of the PIAA All-State team last season as  a running back.

What are the expectations for California High School for this upcoming football season?

“Expectations are extremely high regarding the fact that we finished the regular season last year undefeated, until losing 1 game before the WPIAL title game. We have a new slogan this year for our team – “Don’t give up the ship.” It’s a naval reference and fits our team perfectly. We had a great group of Seniors last year, all 12 of them, who left a mark on California like no other. We had a great crew last year but we have a new crew now and cannot give up the ship! It’s our job to continue the new winning tradition here at California.”

Some people call you “Baby Bettis.” Can you tell me who started calling you that and why?

“It started when the local “CUTV” channel aired our football games on their network and their commentators dubbed be as “Baby Bettis” due to my then, 6’1” 285lb stature! However, this off season I’ve leaned out a bit and now I’m 275lbs. I wanted to lose a bit of fatty parts of my body and work to gain muscle after burning. This has potentially made me faster, stronger, and more mobile as a big man. I also didn’t want to lose too much weight because as a DT/DE in college. . . I’m going to have to be a big guy anyways!”

What are some of your favorite weight lifting exercises?

“Weightlifting is great but there are so many great things I like to do that are from natural body movements. It’s better on the body. I have been working tremendously on a lot of assets of my game from balance, hip, and glute strength to footwork and explosiveness.”

Which team are you most looking forward to playing against this season?

“Washington High won the 2A WPIAL championship last season so that’s a game I’m pretty excited about playing in. However, no team we play against will be slept on. Being expected to take single A by storm this year, we have a target on our backs that will resonate to more team focus.”

Who is an athlete that inspires you and why?

“Aaron Donald is a physical specimen despite being undersized for the position he plays. I am only being recruited as a DT/DE which is what Aaron Donald plays. In fact, Aaron Donald is the same size as me, expect he is far more toned and chisled! I constantly watch his tapes and games to learn from him. He has a tremendous work ethic and I envy that! I want it for myself as well.”

What’s your favorite type of music to listen to before a football game?

“I listen to hip hop & rap music to remind me of how hard I’ve worked to get where I am. I’m not famous, I’m not a star, or a rapper who made it. . . But, I listen to those songs to remind me that if I wanted to make that reality for myself, that I could! And I will. There are rappers who had been through the worst of hardships and adversities, likewise, I’ve been in some difficult situations. I’ve done everything but fold, so I listen to those kind of songs to get me motivated.”

If you could go anywhere in the world, where would you go and why?

“A third world country; only to give myself a reality every now and again to realize that life could be so much harder. People in those countries don’t have much but they appreciate the littlest things they have. I’ve learned to live that way. Visiting a third world country would truthfully open my eyes and potentially change my lifestyle forever. It’ll give me a more realistic standpoint.”

If someone ever bought you a Matthew Stafford jersey, would you ever wear it?

“I’d appreciate anything someone would buy for me, and I’d wear that thing with pride just because my last name is on it. 😂”

“My mother’s kitchen because I know I’ll never be dissatisfied with what’s put in front of me to eat. She’s fantastic.”

“I don’t like attention too much. I favor attention when it’s used in the correct way. I’m a very humble guy, that’s just the way I’ve been raised. I don’t like putting myself first at times. It could be a good and a bad thing, but it’s however others really portray you at the end of the day. It’s my job to show people the great character I plan to obtain.”