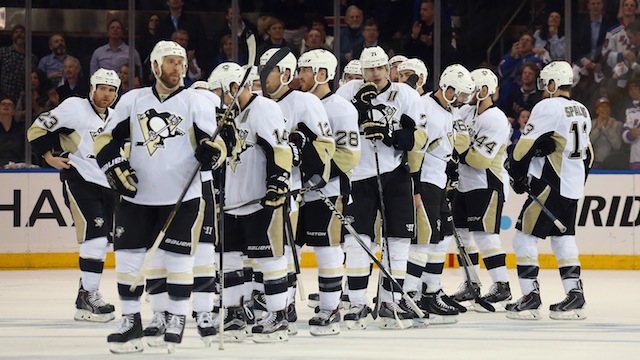 Each week I will highlight the week that was in the NHL and give you the latest power rankings. I will highlight the teams’ record for the season, record for the week, and for the top ten a reason why each team is in the spot that it is in. The NHL season officially begins on 10/4 with 4 regular season matchups. Without further ado, here is the NHL Power Rankings for the first week!

The loss of Panarin is crucial, but would you ever question anything the Blackhawks do? The Blackhawks still have Patrick Kane and Jonathan Toews, and they acquired gritty Brandon Saad in the trade with the Blue Jackets. The x-factor for this team could be youngster Alex DeBrincat. Chicago has high expectations for DeBrincat, and he has the potential to be a 30-40 goal scorer.

After having one of the better offenses last year, is it possible they got better? The Blue Jackets acquired Artemi Panarin in the offseason from Chicago, a left winger who finished with 74 points last season. Team him up with Cam Atkinson and the up-and-coming Alex Wennberg, and the Blue Jackets have one of the best top lines in the NHL. The Blue Jackets will need another consistent season from goaltender Sergei Bobrovsky, but if they get that, they have the potential to do some damage this season.

Mike Yeo seems to have this team primed for a big season. Led by my preseason Vezina pick, Jake Allen, at the backend of this team, the Blues look ready to be considered a serious contender. Allen seemed to figure things out at the end of the year and carried it into the postseason, keeping the Blues in games they should have not been any part of. Led by Vladimir Tarasenko on offense, the Blues should be much more sound in their all-around game and should be in the running for the Cup come playoff time.

Even without great offense, the Canadians seem to always be contending in the postseason. As long as Carey Price is in net, you can never count the Canadians out. Now, with the acquisition of Jonathan Drouin from Tampa Bay, the offense should be a little more potent. I expect nothing different from the Canadians this season, as they should be in the thick of things come playoff time.

It has been years since the Maple Leafs had this high of expectations. Behind the young trio of Auston Matthews, Mitchell Marner and Williams Nylander, many people believe that the Maple Leafs will not only score the most goals in the NHL, but also compete for a Cup. The pressure will be on the young defense and goaltender Frederik Anderson, as the Maple Leafs will have to be better in their own end if they want to be a real contender this season.

The Lightning struggled through three quarters of the season last year, and it finally looked like two straight trips to the Stanley Cup came back to haunt them. But at the end of the year, no team was hotter than the Lightning. After missing Steven Stamkos for all but nine games and missing Ryan Callahan for half the season, the Lightning will finally be fully healthy. Even though they lost Jonathon Drouin in a trade with the Canadians, they signed veteran Chris Kunitz, and the young players all got another year of experience. The Lightning look primed for a run at the Stanley Cup once again.

This could be the year the Oilers make a run at the Stanley Cup. The Oilers have ex-100-point scorer and the best player in the NHL, Connor McDavid, manning the offense, and with Leon Draisaitl either right next to him or centering the line behind him, the Oilers have one of the best 1-2 punches in the game. Edmonton is looking to resurrect the career of recent acquisition, and still young, Ryan Strome from the Islanders, as they expect to slot him next to McDavid on the top line. The Oilers are set in goal with the consistent and trustworthy Cam Talbot.

Two years in a row, the Capitals have had the best regular season record, but they continue to flounder in the postseason. They return Ovechkin and Backstrom on offense and still have Braden Holtby manning the net. Many expect Evgeny Kuznetsov to take off this year, and Andre Burakovsky is a sleeper, who they expect to man one of the wing spots on the 2nd line with Kuznetsov.

The Predators fell to the Penguins in the Stanley Cup Final, but they have to be number two until proven otherwise. Can the Predators rekindle the magic from last year’s postseason run?

The Penguins are the defending Stanley Cup Champions, how can they not come in at the top spot? Only one question remains: do two-straight Stanley Cup appearances finally catch up to the Penguins?