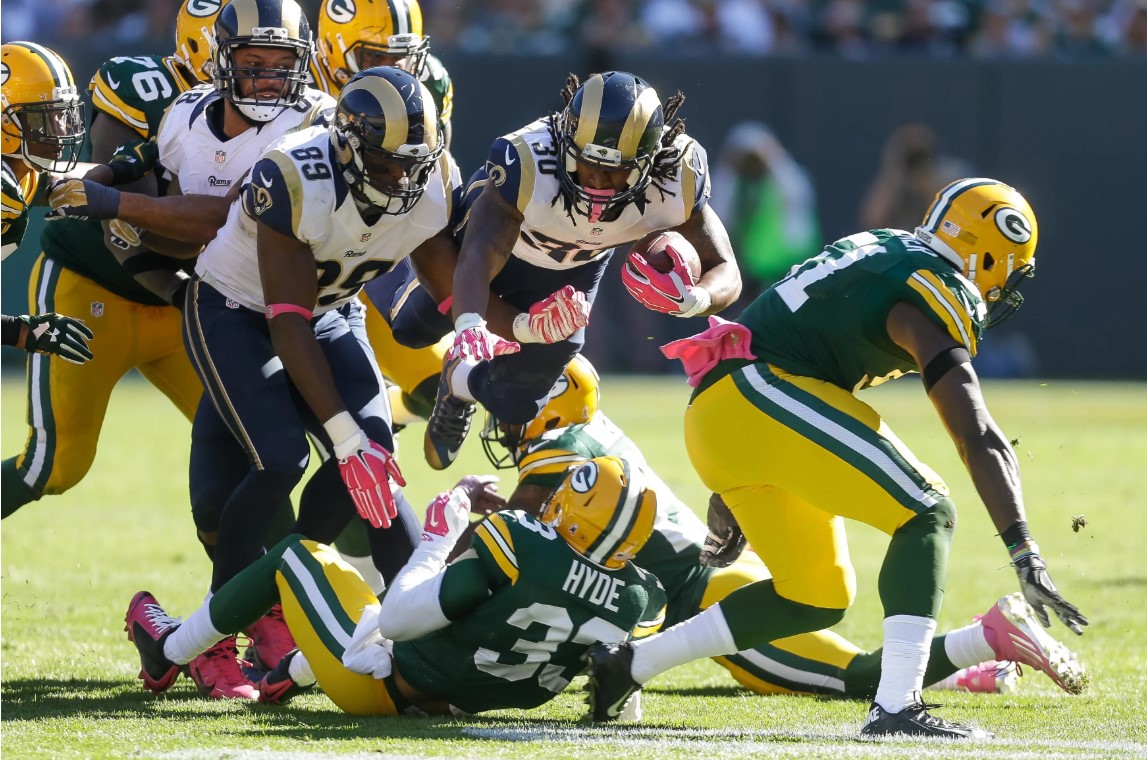 This game between the Packers and Rams features this week’s highest implied game total at 57 points. However, the Packers will enter this contest coming off of their bye week as 9 point road underdogs. Even with the large point spread, Rodgers is still the 2nd highest priced quarterback on Sunday’s featured DraftKings slate. Of course, we are talking about Aaron Rodgers here, and given the Rams propensity for scoring real-world football points, Green Bay should have to throw plenty to keep pace.

On the season, Rodgers has averaged 26 completions on 42.3 attempts, 332.8 passing yards, 2.0 touchdowns, 0.2 interceptions, and is currently ranked as QB9 with 23.8 DK points per game. He has scored at least 16.0 DraftKings points in every contest and has scored more than 31.4 in two out of six games this year.

On the other side of the ball, he will be facing a Rams defense which is currently giving up the 26th fewest fantasy points at 17.1 per game to opposing quarterbacks. Over the first seven games, the Rams defense has faced Derek Carr, Sam Bradford, Philip Rivers, Kirk Cousins, Russell Wilson, Case Keenum, and C.J. Beathard. If we remove the games from Carr, Bradford, and Beathard, they have allowed 24 DK points per game to the other four quarterbacks. Although the Rams clearly have talent on defense (particularly along their defensive line), several opposing QBs have had success throwing the ball against them in recent weeks. With Rodgers play-making ability and the offensive weapons at his disposal, he could find similar success on Sunday.

On this weekend’s featured DraftKings slate, Jared Goff comes in as the 6th highest priced quarterback and is set to face the Packers as a heavy home favorite. On the year, Goff has averaged 21.7 completions on 31.1 attempts, 304.3 passing yards, 2.0 touchdowns, 0.7 interceptions per game, and is ranked as QB13 with 22.2 DK points per contest. Given the Rams ability to put points on the board, you might expect Goff’s numbers to look a little better, but then you suddenly remember what a stud Todd Gurley has been this year and Goff’s season-long totals begin to make a little more sense.

That said, in the Rams three home games this year, Goff’s numbers have been considerably better than on the road. In these three contests, Goff has averaged 26.3 completions on 33.7 attempts, 391.0 passing yards, 3.0 touchdowns, 0.7 interceptions, and 31.4 DK points per game. In each of these matchups, he has scored at least 22.3 DK points and hit a season-high mark of 42.3 fantasy points in Week 4 against the Vikings.

This weekend, Goff will get an opportunity to take on the Packers defense, which is currently allowing the 23rd fewest points to opposing quarterbacks, at 18.2 DK points per game. Although the Packers current ranking against QBs looks impressive, they haven’t exactly faced a list of who’s who at the top of the quarterback food chain.

Their first six games include contests against Alex Smith, Josh Allen, and C.J. Beathard. While each of those players has had a good outing or two, they are all ranked in the bottom half of the DraftKings scoring column on a per game basis. Given the high-implied point total in this game, Goff’s splits at home, and the Rams multitude of offense weapons, Goff might provide significant fantasy upside in this contest.

There are plenty of running back-by-committee backfields in the NFL these days and then there are the Green Bay Packers. While Jones, Montgomery, and Williams don’t lack talent, trying to figure out Mike McCarthy’s usage for any one of these backs can be an exercise in futility and is often dictated by game flow or his desire to mix all three of these players into his game plans.

Since Aaron Jones was suspended for the first two games of the season, in order to get a handle on each players’ workload, the table below shows the per game averages for the four games in which all three were active.

While most observers would agree that Jones is the most talented of the bunch, he is only seeing one more rushing attempt per game than Jamaal Williams while Ty Montgomery leads the trio with 4.0 passing targets per game. To muddy the water even further, in Weeks 3 through 6, Williams has led the backfield with 29.5 snaps per game, while Montgomery has seen 23.8 and Jones has received 21.8. Due to the equitable manner in which McCarthy is utilizing this backfield, it probably makes sense to steer clear of this situation all together in Week 8.

However, given the point spread in this game and the Rams ability to score, the Packers are probably going to have to throw the ball quite a bit to try and keep pace. As a result, if you want to take a chance on one of these backs, Montgomery might make the most sense since he leads this group with 4.0 targets per game. That said, roster these running backs at your own risk.

From the muddy waters of the Packers backfield, we can now turn our attention to the best running back in the game, Todd Gurley. As a football fan, you’d have to be living in a cave to not know what an absolute stud this guy has been over the first seven weeks of the season. With an average of 30.9 DK points per game, Gurley comes into this contest as the top ranked running back on a points per game basis.

Rather than list all of his stats one-by-one, it probably makes more sense to just let you see them game-by-game in all their glory.

These numbers are just crazy, but to quickly summarize, Gurley has scored at least 25.5 DK points in every contest and has scored more than 30.0 in five out of seven contests. He has also scored a touchdown in every game and has scored two or more touchdowns in four out of seven. Gurley also leads all running backs with 43 rushing attempts inside the red zone. The next closest running back in red zone rushing opportunities is Alvin Kamara with 27.

This weekend, Gurley will take on the Packers defense which is currently giving up the 21st fewest points to opposing running backs at 21.9 DK points per game. Despite the Packers ranking against running backs this season, Gurley is basically matchup proof at this point. At some point, he may have a poor game but I feel confident that it won’t be this weekend.

For the first time since Week 3, Aaron Rodgers is likely to have all three of his primary wide receivers back on the field at the same time. Although Randall Cobb is still officially listed as questionable, he was a full practice participant on Friday which bodes well for his chances of playing on Sunday. In addition, Geronimo Allison was also able to log a full practice on Friday and has consequently been removed from the injury report.

In the absence of Allison and Cobb, Davante Adams has been a workhouse and is currently ranked as WR2 with a 24.1 DK points per game average. Given Adams’ workload in the absence of his fellow wide receivers the past few weeks, it’s fair to wonder how their return might affect his fantasy performance moving forward. That said, here is a look at how the Packers wide receiver corps performed while all three were healthy in Weeks 1 through 3.

As the numbers indicate, Adams was Rodgers’ favorite target as he saw an average of 9.7 per game while also scoring a touchdown in each contest. Right behind Adams was Randall Cobb with an average of 9.0 targets per game and Geronimo Allison was third at 6.0 targets per game. Although Allison was third during this stretch, he led the Packers in yards per reception at 20.8 which helps explain his respectable 15.3 DK points per game average.

In theory, based on the implied game total and point spread in this matchup, the Packers are going to need Rodgers to throw the ball in this game in order to keep up with the Rams offense. Adams is the most consistent and offers the most upside. However, if you want exposure to this passing attack and opt to go with one of the less expensive options, the decision between Cobb and Allison is slightly more difficult. That said, given Cobb’s continued designation as questionable heading into this contest and Allison’s high yards per reception total, we should probably lean towards the latter.

In addition to Robert Woods and Brandin Cooks, we might also normally consider Cooper Kupp as well. However, Kupp is listed as doubtful for this weekend’s contest as he is still recovering from a knee injury sustained in Week 6 against the Broncos. With Kupp most likely sidelined, that leaves Woods and Cooks as the two wide receivers with the greatest fantasy value on the Rams offense this weekend.

Both Woods and Cooks are priced $100 apart and through the first seven games of the 2018 season, their per game statistical averages are nearly identical.

While Jared Goff has only averaged 15.4 DK points per game on the road, his fantasy production at home jumps to 31.4 DK points per game. As a result, both Woods and Cooks offer decent fantasy upside in this contest. On the season, the Packers are currently allowing the 16th most points to opposing wide receivers at 37.5 per game, but they haven’t faced many quality opponents to this point in the season. As a result, both of these receivers are solid fantasy options on Sunday.

Over the past three weeks, Jimmy Graham has averaged 14.4 DK points per game. During that time, he has also seen an average of 8.7 targets per game and has scored 11.0 or more fantasy points in each contest. However, as was noted earlier, this will most likely be the first time since Week 3 that all of Green Bay’s starting wide receivers get back on the field at the same time. By comparison, when the Packers wide receivers were all healthy and active in Weeks 1 through 3, Graham only averaged 6.3 targets and 9.3 DK points per game.

While Graham has a positive matchup against the Rams defense which is currently allowing the 9th most DK points to tight ends at 13.7 per game, if Cobb and Allison both take the field on Sunday, it could cut into the Graham’s fantasy production. Although he is one possible option at the tight end position on Sunday, we need to be aware of the potential for a reduction in the workload he has seen the past several weeks.

The Rams don’t use their tight ends in the passing game with any frequency and as a result, neither of these players should be considered as roster options for this weekend. Tyler Higbee is only averaging 2.5 DK points per game and Gerald Everett is averaging 2.4. You can safely avoid both of these tight ends on Sunday.