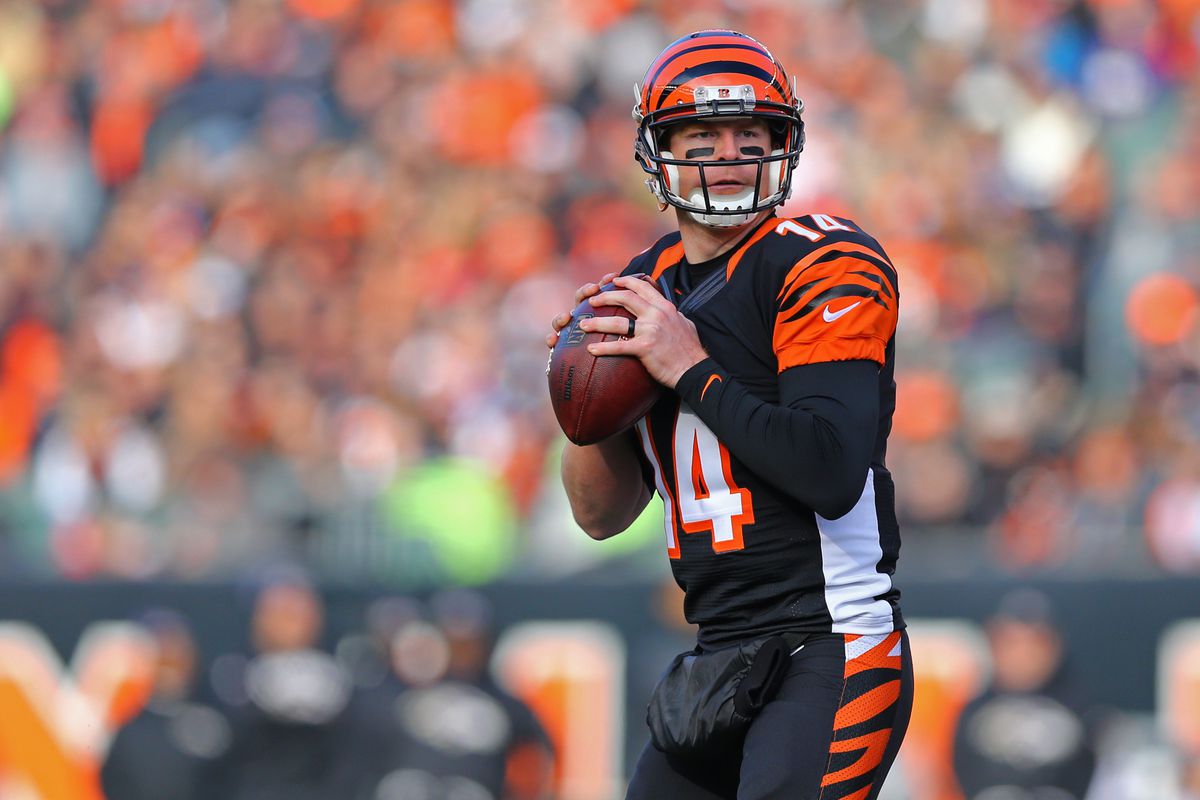 Winston comes into this week’s game against the Bengals as the 6th most expensive QB on Sunday’s featured DraftKings slate. Although Winston was suspended for the first three games of 2018, since returning he is currently ranked as QB10 on a per game basis.

Although the sample size is small at only three games, he has averaged 26 completions on 37.7 attempts, 301.7 passing yards, 2.0 interceptions, 1.67 touchdowns and 23.4 DK points per game. However, upon his return to action he only played one half of the game against Chicago in Week 4. If we remove that game and only look at the two games in which he has started, his numbers are more impressive as his per game averages jump to 31 completions on 46.5 attempts, 380.0 passing yards, 2.0 touchdowns, 2.0 interceptions, and 30.9 DK points per game. For comparisons sake, Mahomes currently holds the highest DK points per game average on the year at 30.6.

With a projected game total of 54.5 points, this contest could live up to its billing as both pass defenses have been exploited numerous times this year. The Bengals are currently allowing the 5th most DK points to QBs at 25.9 per game. While Winston is prone to turning the ball over, given the Buccaneers lack of a running game, their weak defense, his high number of pass attempts, and the weakness of the opposing pass defense, Winston could keep his hot start going on Sunday.

From the 6th most expensive QB on Sunday, we now turn to the QB with the 4th highest salary. This past Sunday, Dalton put up his worst fantasy outing of the year against a weak Kansas City pass defense with an 8.92 dud. Despite this poor performance, on the season Dalton is averaging 260.3 passing yards, 2.1 touchdowns, 1.1 interceptions, and 19.1 DK points per game which puts him at QB18 on the year. He has also scored 17.0 or more DK points in five out of seven games and 20.0 or more three times.

On Sunday, Dalton will get an opportunity to get back on track against the team that is currently allowing the most DraftKings point to opposing QBs at 30.1 per game. As noted above, this game features a high implied game total of 54.5 which is the second highest on the DraftKings featured slate. Although the Bengals have a much better run game than the Buccaneers, this matchup sets up well for both quarterbacks and has the potential to turn into a high-scoring shootout.

According to reports from earlier this week, Peyton Barber suffered an undisclosed injury in the Buccaneers Week 7 matchup with the Cleveland Browns. Consequently, Barber was held out of practice on Wednesday, was a limited participant on Thursday, and a full participant on Friday. This progression of practice involvement seems to indicate that Barber will ultimately suit up on Sunday. However, in the event that Barber is ultimately scratched for this weekend’s matchup with the Bengals, Ronald Jones might finally get the opportunity to show what he can do in a featured role.

If that situation were to unfold, approximately 12 carries would be up for grabs and Jones would be the most likely candidate to receive the bulk of those attempts. That said, there are probably better ways to get exposure to this game than by focusing on the Buccaneers rushing attack. To illustrate what they have done this season, the table below provides a quick statistical breakdown for each of the Buccaneers running backs through their first six games.

While those number aren’t overly impressive, Cincinnati is currently giving up the 5th most fantasy points to opposing running backs at 31.6 points per game. While we shouldn’t automatically eliminate the Buccaneers running backs from consideration, there are probably better options at the position.

To start the season, Mixon has averaged 16.5 DK points per game which translates to a ranking of RB13 on a points per game basis. Although he missed two games to injury earlier in the year, Mixon has also scored 18.4 or more points in three out of five games.

Earlier in the year, Giovani Bernard was also in the mix, but he suffered an injury in Week 4 and has been out ever since. While he is close to returning, Bernard has not practiced this week and it would make sense for the Bengals to leave him on the shelf until after their bye in Week 9. This should afford Mixon the opportunity to continue to dominate the vast majority of the touches in the Bengals backfield for a couple more weeks. Here is a quick breakdown of each of Mixon’s games this season.

In Week 8, Mixon and the Bengals are set to face the Buccaneers who are currently allowing the 10th most points to running backs at 28.6 points per game. Due to Mixon’s current lead-back status, his involvement in the Bengals passing game, and a weak Buccaneers defense, he should be able to bounce back from his poor Week 7 showing.

Due to the lack of a consistent running game and a Tampa Bay defense that has been unable to stop their opponents from scoring, the Tampa Bay offense has been forced to throw the ball a ton this year. In the two games that Jameis Winston has started since returning from suspension, he has averaged 46.5 passing attempts per game. Luckily for the Buccaneers, Winston has three very good wide receivers to which he can distribute the ball. Here is a quick look at all three receivers’ season-long averages.

Despite the fact that Winston is averaging 46.5 passing attempts and 30.9 DK points per game in his two starts, here is another look at these receivers averages with Winston under center.

Although the sample size is small at only two games, Evans’ target share has dropped, Jackson and Godwin’s targets have gone up, and Godwin is the only receiver to get a bump in fantasy production. While all three of these receivers are in play against the Bengals this weekend, on a points per dollar basis, Godwin presents the best value while Evans and Jackson offer the highest ceilings based on their big play ability. On the season, Cincinnati is allowing the 11th most points to opposing wide receivers at 41.39 per game, so all three should have an opportunity to put fantasy points on the board this Sunday.

When it comes to the Bengals passing game, there are really only two wide receivers that we need to be concerned with from a fantasy perspective. On the season, A.J. Green is averaging 19.4 DK points per game and Tyler Boyd is averaging 17.0. While their points per game averages and rankings aren’t that far apart, there is a difference in each of their week-to-week consistency levels.

Through the first seven games, Green has scored at least 15.5 or more DK points in six out of seven contests and more than 20 in three games. He has also received at least 8 targets in every game and has been targeted 36 times over the past three weeks. Green’s lowest fantasy point total of the year was 10.8 in Week 3 against the Carolina Panthers. Conversely, Boyd has scored 21.0 or more DK points in four games, but in the other three, he has scored 8.4 or less. Due to the consistency differences between these two receivers, here is a quick glimpse at each of their game logs this season.

In Week 8, both of these wideouts are certainly in play against a porous Tampa Bay pass defense that has allowed the 2nd most points to opposing wide receivers at 49.5 DK points per game. If you are looking for consistency, Green is probably the best option. However, for $1300 less, Boyd certainly offers plenty of upside in this game but also comes with a much lower floor.

Buccaneers tight end, O.J. Howard is in a great spot this weekend against a Bengals defense that is allowing the 4th most points to the position at 17.7 per game. On the season, Howard is ranked as TE10 with an 11.2 DK point per game scoring average. However, his season long totals include a 0.0 fantasy outing in Week 4 against the Bears in which he sprained his MCL in the first half and didn’t return to the game. If we remove that contest from his season-long totals, his points per game average jumps to 13.4 which would bump his positional ranking up to TE7. In the games which he has started and completed, he has scored more than 11.7 DK points in four out of five games. At a price of only $3900, he is definitely worth roster consideration on Sunday.

Although the Buccaneers haven’t been able to defend the tight end position this season, over the past three games as the starter, Uzomah is only averaging 9.0 DK points per contest. In addition, in two out of three games, he was only targeted twice but received seven targets in the third. While this is a Prime Choice Grade A matchup, due to his sporadic target volume he does come with a certain amount of risk.