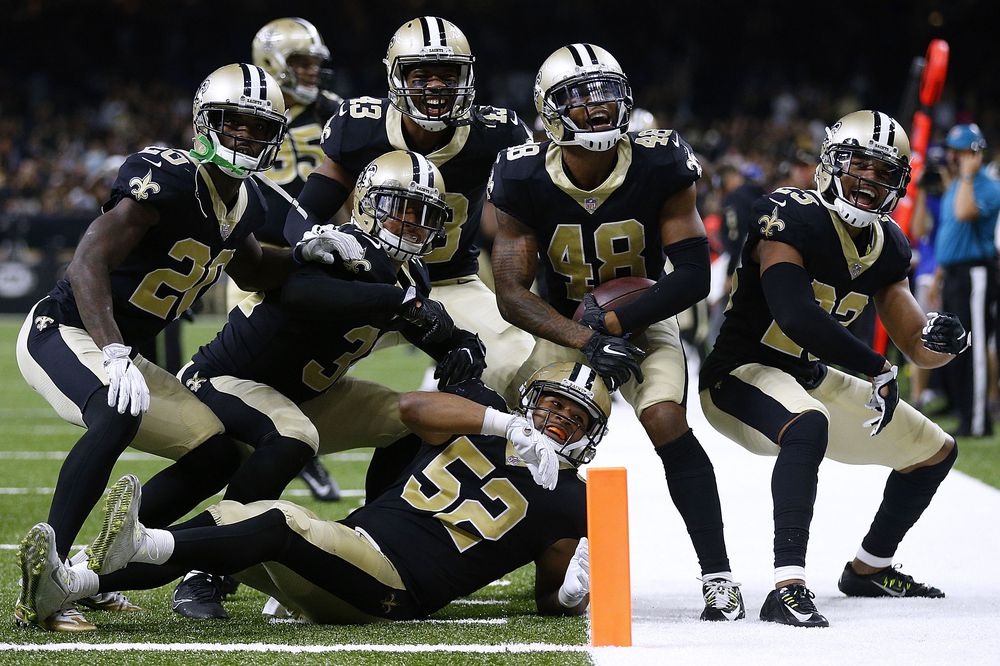 In probably the closest division battle we have in the entire NFL, we preview the NFC South division. If the season were to end after week 12, three NFC South teams would make the playoffs, which shows you the level of talent in this division. If you are unfamiliar with this division, it includes the New Orleans Saints, Atlanta Falcons, Carolina Panthers, and Tampa Bay Bucs. These predictions are based on remaining schedule, injuries suffered, and current level of play.

One of the big surprise teams this year has definitely been the New Orleans Saints. As with any Saints team the past decade or so, they continue to be a very efficient high-scoring offense, but what has surprised everyone has been the dramatic turnaround the defense has made. The defense has been a problem ever since the Saints won the Super Bowl in 2009, and now they finally look like a complete team again after all these years. The remaining schedule for the Saints will prove if they are the real deal, as they play the Panthers once and the Atlanta Falcons twice. In a division so close, these last five games will assuredly be highly entertaining.

The potential to crash and burn is there, but it looks like the Saints are the most complete team in the NFC South.

Best-Case Scenario: The Saints go 11-5, win the division, and get second seed in the NFC.

Worst-Case Scenario: The Saints tough schedule gets the best of them; they lose tough division games, and have to fight for a wild card spot.

The Carolina Panthers have been one of the more interesting teams thus far. Despite their 8-3 record, they’ve played very inconsistent much of the year. They play lights out some weeks, then barely squeak out a win the next, or get destroyed by the likes of the lowly Chicago Bears. Perhaps one of the more puzzling moves of the year was the decision to trade wide receiver Kelvin Benjamin away to the Buffalo Bills for a couple of 2018 draft picks. However, the offensive is due for a big boost with the activation of all-pro tight end Greg Olsen off of injured reserve, but as always, this team will live or die on the shoulders of quarterback Cam Newton.

The Panthers have a few tough remaining games on their schedule. Two of which happen to be against their division opponents, the Saints, who they need to beat for a shot at the division title, and the Atlanta Falcons, who they have to fend off from overtaking them. The Panthers also have a matchup against the red hot Minnesota Vikings.

Best-Case Scenario: Panthers overtake the Saints and win the division.

Worst-Case Scenario: The Panthers’ inconsistent play continues, they lose remaining division games, and have to fight for a playoff spot.

A year removed from being in the Super Bowl, the Atlanta Falcons have struggled since the departure of ex-offensive coordinator Kyle Shanahan. They’ve had a very up and down year, but have recently played much better after their three game losing streak. The offensive is starting to click at the right time, as they only face one losing team the remainder of their schedule (play Tampa twice) and need as much help as they can get to remain in the playoff hunt. The Falcons are still in position to have a shot at the division title, but will have to overtake both the 8-3 Panthers (who they lost to) and the Saints, who currently lead the division. However, they do play them twice still.

As of now, the Falcons hold the last wild card spot and look in decent shape to make a run at the division title. However, the remaining games against their division rivals and a matchup with the Minnesota Vikings will make it extremely hard to maintain that position.

Worst-Case Scenario: Falcons lose to Panthers, Saints and Vikings, and miss the playoffs a year removed from the Super Bowl.

Tampa Bay has been one of the most disappointing teams of the 2017-18 season. With the addition of DeSean Jackson and O.J. Howard, and the return of Doug Martin, the offense was supposed to be as high-flying as they come. This obviously hasn’t been the case, as Jameis Winston hasn’t taken the next step in his development. After a slacking by the Atlanta Falcons, the Bucs’ playoff hopes are all but gone. The rest of the season schedule includes a game against each division rival, which gives them the opportunity to play playoff spoilers.

Best-Case Scenario: The Bucs finish the season strong, beat a few division opponents, and spoil one of their playoff bids.

Worst-Case Scenario: There really is no worst case for the Bucs