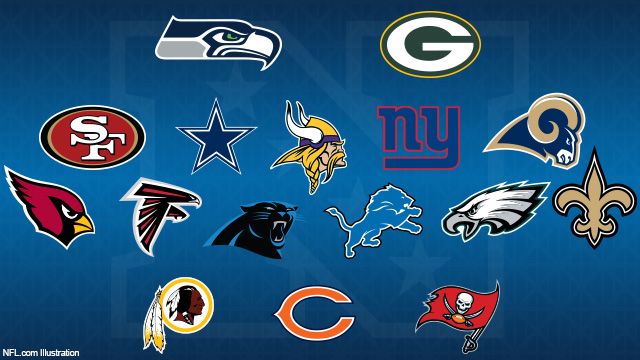 Division and playoff races are starting to heat up as the season is just a little past the halfway point. At this point in the season, you start to separate the contenders from the pretenders. Let’s take a look at how the division and wild card races are taking shape in the NFC.

One of the bigger surprises atop all the divisions is the Washington Redskins.  Almost everyone pegged the Eagles to run away with this division, being the defending Super Bowl champs. However, they currently are two games back with a big road trip to New Orleans this weekend. The third team still in the hunt is the Cowboys who also sit two games back and have played better football as of late. I think with an Eagles loss this weekend, they will be too far back to win the division. This leaves it down to the Cowboys and Redskins who play in Dallas next week. The winner of this game I think takes the division. I’m going to go against the grain and say the Cowboys get on a run here and somehow find a way to take the East.

One of the best divisions in football is set to have one of the more interesting division finishes. Three teams are still in the hunt, with Packers, Vikings and Bears all separated by two or less games. The Packers seem to be heading in the wrong direction, however, having lost three of the last four games. With a trip to Minnesota next week on deck, a loss would almost eliminate them from division contention. The Vikings and Bears are separated by only a half game, with a huge head to head matchup this week in Chicago. Looking at the remaining schedules, you’d have to give the edge to the Bears, as they only face one team, other than the Vikings twice, who have a winning record. The Vikings only chance to win the division in my eyes is sweeping the two head to head games. Though it is possible, I’m going to say the Bears win the North just because of the remaining schedule.

The Saints could very well be the best team in football. I’m still not completely sold on the defense, but the offense seems unstoppable. Their only real competition for the division crown is the Panthers, who currently sit two games back. The only way the Saints lose this race is if they lose both head to head matchups, which both occur in the last three weeks of the season. I don’t see the Saints losing both games, so the Saints take the South.

With the largest division lead in all of football, the Rams currently hold a comfortable four game lead. The only team with even a slight chance is the Seahawks, who would almost need to win out and hope the Rams drop four or five games. This isn’t going to happen, so give me the Rams to take the West.

Assuming the Saints, Rams, Cowboys and Bears win their divisions, let’s take a look at how the wild card race could shake out. The remaining teams looking to get in include the Redskins (6-3), Panthers (6-3), Vikings (5-3-1), Seahawks (5-5), Packers (4-5-1), Eagles (4-5), and Falcons (4-5). One of the reasons I picked the Cowboys to win the division is I think the Redskins are going to have a rough end to the season. The Panthers have struggled on the road this season, which doesn’t bode well once cold weather starts coming around. Next week, the Panthers host the Seahawks, which I believe the winner of that matchup will make the playoffs. Since the game is at home, I’m going to take the Panthers to win and be one of the wild card teams.

The last team I think will get in is the Vikings. The team has played better as of late, even though they’ve had multiple injuries to many key starters. Once they get fully healthy, they could be a dark horse team once again in the playoffs. This means that I’m predicting the defending Super Bowl champs don’t make the playoffs. They just haven’t looked like the same team this year, and without a major upset this weekend in New Orleans, they will fall to 4-6 which will be tough to overcome.