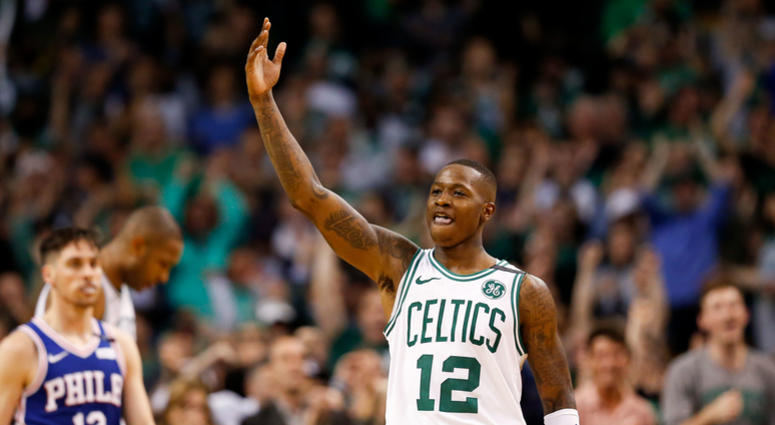 Yesterday was a big day here at FlurrySports. Multiple people who read the NBA DFS article profited nicely. One reader won $5,000 on a $3 entry! That is a very nice payday and an amazing return on investment. For the NBA Preseason and first two weeks of the NBA season our content will be free to the public. After that we will switch to paid content. To get on board, head over to www.flurrysports.org to sign up for a free account and never miss out on our newsletter and special offers!  Below are some of the images reflecting yesterday’s winnings.

Terry Rozier – (DK $7300 FD $4100) – Draft Kings seems to realize that Rozier is a solid play. Meanwhile, Fanduel’s pricing algo is still on vacation. Rozier is a lock at his price with no Kyrie tonight. His minutes and usage will rise and he will get to use more of the court. Rozier is averaging 10 real points per game and that number should creep up into the high teens tonight without Kyrie and Hayward on the floor.

Collin Sexton – (DK $6000 FD $5200) – Sexton played 22 minutes in their lost contest but I expect that to meet or exceed 26 minutes. His usage is at 28 percent and in their last contest he put up 15 points, four boards, one assist. He also hit two three-pointers against the Celtics.

Victor Oladipo – (DK $7900 FD $8800) – Oladipo has settled in nicely to the Indiana offense. He is insanely athletic and can light up the scoreboard in a hurry. In their first preseason game “Dipo” put up 24 points, 3 rebounds, 2 assists, and a block. While he played 25 minutes that is just over 1.7 fantasy points per minute. I expect him to get the same amount of minutes tonight and he is a very solid play at the position.

Josh Hart – (DK $6000 FD $4100) – Hart is a solid play on both sites but he is obviously more attractive on Fanduel due to the huge discount. Over his first two contests he has scored a total of 38 points, 10 rebounds, 5 assists, 2 steals, and 3 blocks. He is averaging 28 minutes per game at just under a fantasy point per minute. He’s a solid floor guy that will play the minutes to meet value.

Jaylen Brown – (DK $6600 FD $5800) – Same scenario here for Brown. The Celtics will be without Kyrie Irving and Gordon Hayward. That’s a lot of usage to go around along with a pile of minutes with them out of the rotation. Brown is averaging just over 19 minutes per game while putting up almost 12 points, 4 rebounds, and falling into a few assists and rebounds. Logically those numbers should go up tonight and he is a solid lock and load cash play.

MarShon Brooks (MEM) – Should  regress a little though from his perfect shooting the other night. Jordan Clarkson (CLE)

Tobias Harris – (DK $7500 FD $7600) – This is easily the most stacked position on tonight’s slate.  Harris has been on fire to start training camp. He’s averaging just under 50 fantasy points per game and he is a lock and load for me tonight with the value plays the Celtics and Cavaliers have given us.

Danilo Gallinari – (DK $6900 FD $6400) – Gallinari is back and he is healthy. This is a great sign for a Clippers team that is in desperate need of a pulse on offense. He is scoring over 20 real points per game and filling up the peripherals. He is also getting to the line on a regular basis which adds in a nice floor to our roster.

Brandon Ingram – (DK $7700 FD $6800) – Ingram saw a big boost last game with the Lakers giving Rondo the night off and limiting the amount of minutes LeBron played to just around 15 minutes. It is possible at the time I am writing this that Lonzo ball will play in limited minutes so while I like Ingram in cash games, I am fine fading his inflated ownership in deep tournament formats.

Jayson Tatum – (DK $7000 FD $6100) – Both DFS sites seem to be on point with the Celtics’ salaries. Tatum will be a chalky play tonight with no Gordon Hayward but I feel like we are going to want him in more lines than not. I like the pivot off his ownership to some of the higher priced guys in tournaments. The punts below will help you accomplish that in your rosters.

Al Horford – (DK $6700 FD $6900) – Another Celtic. No surprise with two big usage players taking the night off. Horford should be a focal point of the offense and rebounding for around 25 minutes tonight. He’s a great cash play but there are other options I wouldn’t fault you for as pivots. He has the ability to be used at Center on Draft Kings so I think he is a must on that format in cash games.

JaMychal Green – (DK $6100 FD $4900) – Green has been a constant contributor to the Grizzlies front court. He’s growing into a nice role while averaging almost 1.5 fantasy points per minute. He’s a great pivot off the Celtics’ ownership and I like him to have a solid game tonight against Indiana in a paced up game.

Marcus Morris – (DK $6900 FD $6400) – Gallinari is back and he is healthy. This is a great sign for a Clippers team that is in desperate need of a pulse on offense. He is scoring over 20 real points per game and filling up the peripherals. He is also getting to the line on a regular basis which adds in a nice floor to our roster.

Marc Gasol – (DK $5900 FD $8100) – Gasol started out the preseason struggling. However, in their last game he bounced back to respectable numbers. Draft Kings is basically begging us to use him at his salary while on Fanduel he is a little harder to swallow. I like the pace in this game where Gasol can get out on the perimeter and above the key to knock down some easy looks. He’s a very solid play on Draft Kings tonight.

Myles Turner – (DK $6500 FD $6700) – Turner has a tough match up against Gasol but given the options tonight I do not mind him for a tournament play. He has flashed upside at times and this could be one of those times. Use caution though as this is not exactly my favorite spot to go tonight.

Domantas Sabonis – (DK $6300 FD $5600) – I like him much more than Turner and he has multiple position eligibility on Draft Kings. No Thad young so he should draw the start tonight. His 28% usage paired with 1.24 fantasy points per minute set up real nice when he should play around 30 minutes tonight. He’s my top play at the position tonight.

Preseason and the first two weeks of the regular NBA season our content is free. After that time we will be offering memberships. What can you expect from that? Head over to www.flurrysports.org to sign up for a free account and never miss out on our newsletter and special offers! You will not want to miss our members only content! The link below gives you a preview of some of the content we will be offering this NBA season. Click the link below to see our NBA projections for today.