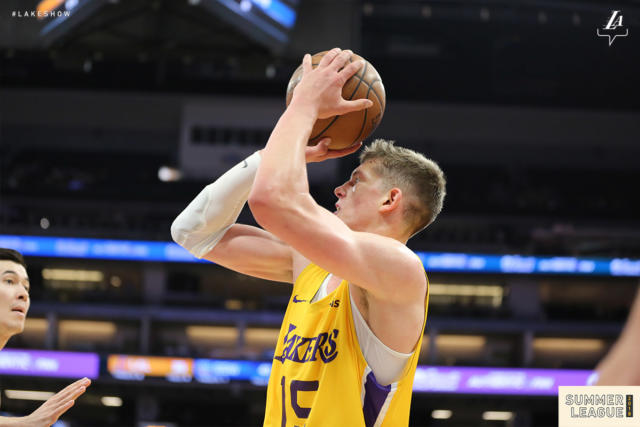 Moritz Wagner has had some ups and downs in the NBA Summer League. He scored 23 points in his debut, but followed it up the next night with an 8-point game. Against the Warriors on Thursday, Wagner posted 13 points and 13 rebounds.

Wagner shot the ball fairly well, hitting 50% from both three-point range (2-4) and the field (5-10). Wagner was also a force on the defensive end and rejected four shots and managed one steal. Wagner is starting to look more and more like the typical NBA center in today’s game and can do it all. If he can do this at the NBA level, he may begin to draw some Al Horford comparisons given his repertoire of lost post moves coupled with his ability to stretch opposing centers. For being the 25th overall pick, Wagner looks like he may be a steal for the Lakers at a pick that can be very hit or miss.

Even in the NBA Summer League, the Golden State Warriors remain the model of consistency and winning. Tonight, it happened to be 6’7” power forward Marcus Derrickson, who punched in 24 points, 11 rebounds, and 4 steals for the Warriors. Derrickson went undrafted out of Georgetown in the 2018 NBA Draft, and it is absolutely ridiculous that a team like the Warriors was able to find him.

Derrickson was followed by Omari Johnson as the game’s next leading scorer, as he put in a solid 15. However, Josh Magete did a lot of things behind the scenes to help put the Warriors over the edge. He recorded a block, 3 steals, 3 assists, and 2 rebounds and really led the Warriors on many of their fast breaks despite only scoring 4 points.