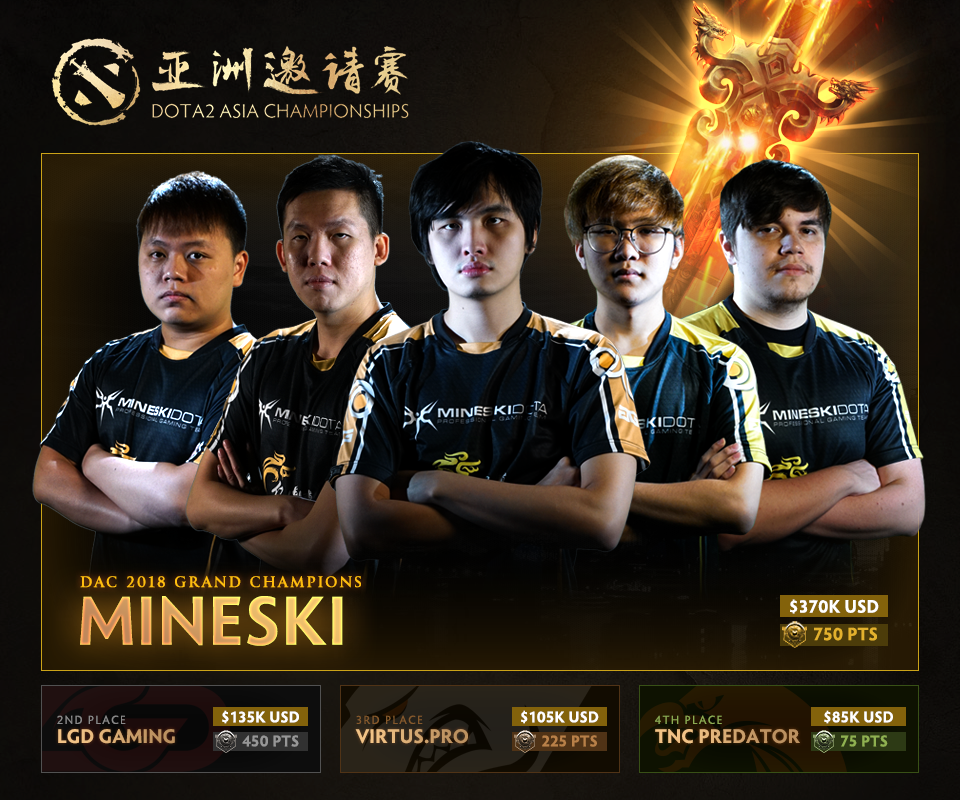 With this victory, Mineski will be the first SEA team ever to win a major tournament since the system was implemented by Valve. They secured themselves $375,000 and 750 Dota Pro Circuit (DPC) points. Mineski now sit on the fourth position in the DPC Ranking, overtaking Newbee. They clinch the championship with a close 3-2 victory over LGD Gaming in the grand final.

Journey Before the Grand Final

Mineski’s journey in the tournament is one of their most impressive runs since their creation of the current line up back in August. They only lost one game to then current group leader Virtus Pro, who went unbeaten in the group stage with a 7-0 standing. With a 6-1 standing, Mineski were able to proceed to the playoff from the upper bracket. From the upper bracket, Mineski steamrolled through the grand final, only dropping one game through the entire upper bracket run. They crushed OpTic Gaming 2-0, beat Vici Gaming 2-1, and clinched a 2-0 win against then future other grand finalist LGD Gaming.

In the grand final, Mineski dropped the first game against LGD Gaming, courtesy of FY’s rotation with Slardar in the early game and Somnus’M/Maybe’s Tiny controlling the middle game. The second game was the complete opposite, with Mineski destroying LGD with their high burst combination of Magnus, Tiny, Gyrocopter, and Ancient Appartion. The third game, LGD sensed a flaw in Mineski’s pick, took this opportunity with a strategy made famous by Team Secret, The Mid Kunkka. LGD was able to control the majority of the game with only a slight hiccup in the middle game, but was nonetheless able to secure the victory. In game four, it’s all IceIceIce. With IceIceIce’s Pangolier, Mineski were able to put fear into LGD’s heart with his constant rotation and perfect ultimate execution. Game four is over with a win for Mineski.

The last game is no doubt the best game in the series. LGD made a four protect one line up, focusing on the Anti Mage. Mineski made the choice to go high sustain, tower pusher lineup with Lifestealer and Death Prophet. The game went back and forth with every gank from Mineski thwarted by LGD’s Underlord. LGD’s strategy worked well with Anti Mage being the highest net worth on the chart. But with perfect team fight execution from Mineski, they were able to turn the game’s momentum to their side. They outfought the four protect one strategy with mass silence from the Disruptor and Death Prophet.

In the end, the game was won by Mineski.

With Mineski’s win, SEA Dota shows a progress that never been seen before.