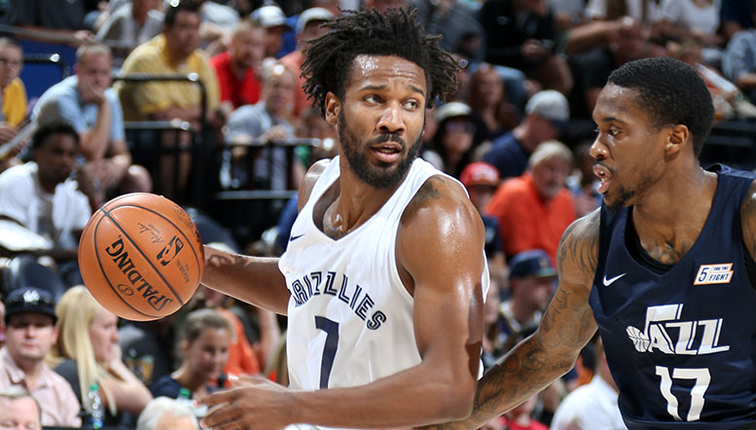 The Memphis Grizzlies Summer League team is off to a solid start. The team managed to hang on for a 95-92 victory over the Utah Jazz Tuesday night to advance to 2-0 in the NBA Summer League.

The Jazz, who defeated San Antonio in their first game, dropped to 1-1 on the summer. Despite the loss, the Jazz have just as much to take away from the match-up as the Grizz. The team was down 19 at halftime, but outscored Memphis in both the third and fourth quarters to close the final deficit to three.

Balance Key for Grizzlies in Win

While the Grizzlies’ first summer contest was the Jaren Jackson Jr. Show, the win over Utah demonstrated a much more balanced attack. Jackson Jr. did still put forth a solid effort (10 points, 8 rebounds, 2 blocks) in the win. Two-year veterans Deyonta Davis and Wayne Selden Jr., out of Michigan State and Kansas respectively, were two of the players that picked up their play after Jackson Jr. came back down to earth.

Selden, who impressed in limited time for a banged up Grizzlies squad to end 2017-18, contributed a balanced 20 points (6-17 shooting), 6 assists and 4 rebounds in 27 minutes of action. The former Jayhawk looks to secure a more permanent spot in Memphis’ rotation, and well-rounded efforts like Tuesday night will certainly help him do so.

Davis, viewed as a major project when he opted to enter the Draft in 2016, almost went the entire game without missing a shot. The 6’11” Muskegon, MI native hit 8-9 from the field and his only free throw on his way to 17 points to go along with 6 rebounds.

DD getting up for ✌️! pic.twitter.com/aDlubceGSF

Not to be forgotten was former high school standout Kobi Simmons. Simmons, who also turned in some solid performances in limited time in 2017-18, finds himself in a similar position to Selden Jr. now that the roster has the off-season to get healthy. The 6’4″ guard matched Selden in scoring (20 points, 8-18 shooting) while adding 5 rebounds and a steal to his efforts.

Tony Bradley Jr. may have left college a little early, but he certainly seems ready for the NBA stage now. The big man will not be taking the starting job from DPOY winner Rudy Gobert any time soon, but looks poised to claim some minutes as the defensive stalwart’s back up. Bradley posted his second double-double in as many games, finishing with 18 points and 14 rebounds on 8-12 shooting. He has been an absolute force inside over the first two games of the summer.

Sparking the second half comeback alongside Bradley were former Iowa State teammates Georges Niang and Naz Mitrou-Long. Niang, the leading scorer in Utah’s opening night win, also had a double-double with 18 points and 10 rebounds in 28 minutes. The 6’6″ wing/forward hybrid also had 4 assists on the night.

Mitrou-Long was the team’s leading scorer in the loss. Turning in possibly the best stat line of the summer for the Jazz, the Canadian went off for 19 points, 8 assists, 6 rebounds and 2 steals while shooting 58.3% from the field (7-12). Mitrou-Long lost his NBA roster spot to Niang at one point in 2017-18, and it’s possible his former teammate’s strong summer play lit a fire under the former Cyclone star.

First-round pick Grayson Allen did not play in the contest. The team cited “rest” as the reason for the DNP.

Marvin Bagley III Struggles, Everyone Scores for the Warriors

Marvin Bagley III Struggles, Everyone Scores for the Warriors
Is the Honeymoon Lonz-Over in Laker Land?