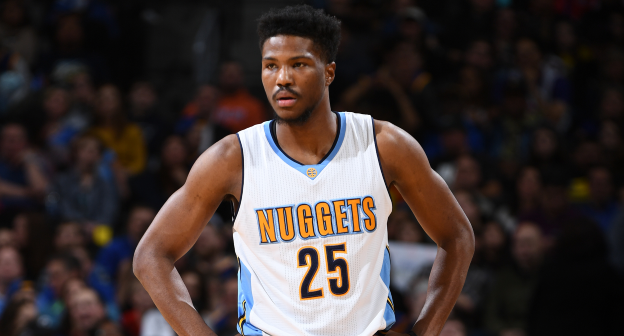 Malik Beasley has developed gradually over his first two NBA seasons. The former Florida State one-and-done only played in 85 games over those two seasons combined. That said, he did see a spike in opportunity in 2017-18, as he played in 62 games compared to just 23 his rookie season.

Beasley always had the size and frame to play in the NBA. At 6’5″, he is rarely overmatched physically by NBA guards. The thing holding Beasley back, other than the loaded guard group ahead of him, has been offensive efficiency. He still has some ways to go, but Saturday night’s win should be viewed as a positive step for the young guard.

Making Plays At Both Ends

Beasley led the Nuggets in scoring with 19 points on 6-13 shooting (46.2%). He hit 2-of-6 three-point attempts (33.3%) in the game. Beasley also connected on 5-of-6 free throws (83.3%). While some of the individual numbers, particularly his shooting from three, still need improvement, it was great to see Beasley scoring from multiple levels. Scoring from multiple levels has become almost a universal skill for the good-to-great guards in the league. For Beasley to eventually join that group, it is something he must do consistently.

Beasley’s offensive output also did not take away from his contributions defensively. His size and length makes him a pesky defender both on and off the ball, and it showed against the Celtics. The Atlanta native had three rebounds and three pilfers to go along with his 19 points.

The most telling stat of the night for Beasley was his 18 +/- rating. His stats alone indicated a solid outing, but the 18 +/- really demonstrated just how much he was doing at both ends of the floor. Denver has a stacked guard rotation, but as a former first-round pick, Beasley should at least have a shot to steal some minutes from the vets. Performances like the one he turned in on Saturday can only help speed up that process.

The Celtics did not have much going for them in the 82-69 loss. The team only had one player even reach double figures. Of course, that player was Jabari Bird, and he led all players in scoring with 24 points.

There were several things to love about Bird’s performance. For starters, he played 32 minutes (the NBA equivalent of 36 given Summer League’s shortened game times). He also hit 9-of-17 shots (52.9%) and all six of his free throws. The 2017 second-round pick also had only one turnover in the game despite carrying the offensive load for the Celtics.

Bird struggled to find his NBA niche after graduating from Cal. He was actually teammates with Celtics’ fan-favorite Jaylen Brown for a brief time while the two were Golden Bears. The Celtics have a loaded roster that may contend for a title this season. For Bird to crack that rotation at all, big Summer League performances would be the necessary starting point. He certainly got off to a strong start Saturday night.