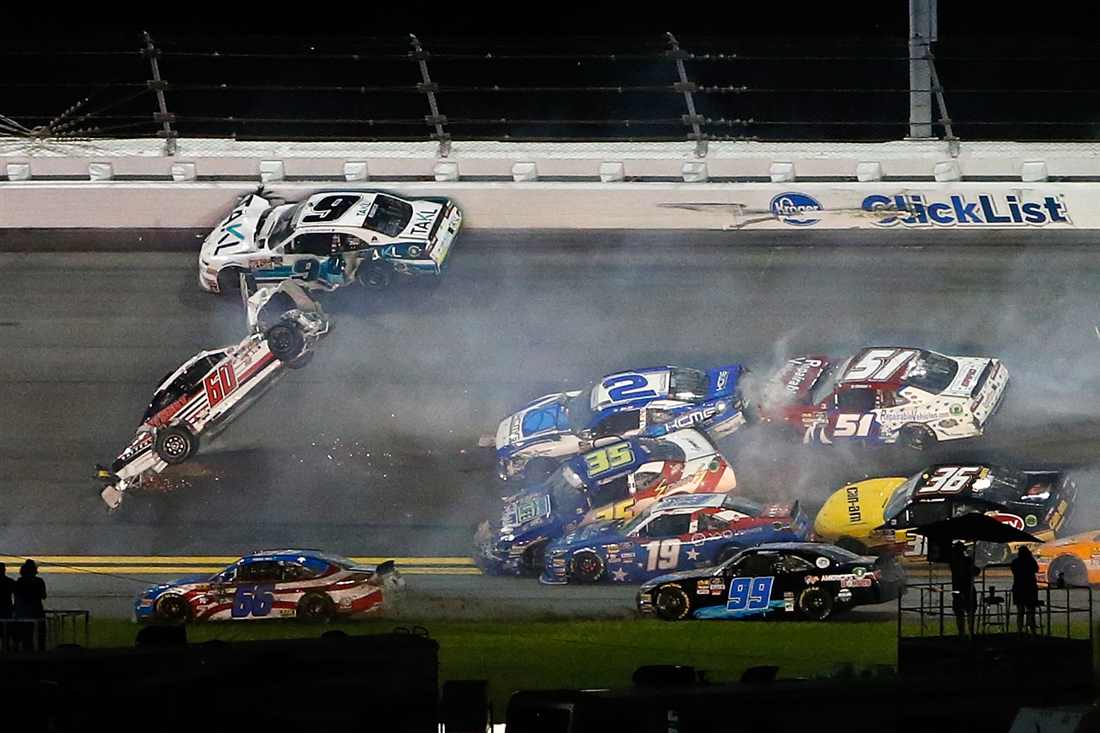 NASCAR’s second 2018 visit to Daytona International Speedway provided two nights of nonstop action for race fans to enjoy. Restrictor plate racing bunches up the field in a way that just doesn’t happen at other tracks. With drivers trying to draft their way to the front, it quite often isn’t necessarily the fastest car on the track who prevails. The weekend was filled with big wrecks, mixed strategies, and great finishes in both the Cup and XFINITY races. It was a great way to head into the backstretch of the 2018 NASCAR season.

At about the halfway point of Saturday’s Coke Zero 400, it didn’t appear that Erik Jones had any shot at winning. However, one never can be too sure when it comes to restrictor plate racing. The race featured 10 total cautions that spanned over 46 laps. After contact between Bubba Wallace and Clint Bowyer sent Bowyer spinning into a 5-car wreck that included contender Kevin Harvick, only 13 cars remained on the lead lap heading into the second overtime. After purposely falling back to avoid the carnage taking place earlier in the race, Martin Truex Jr. had driven himself all the way to the front to be in prime position to capture his fourth victory of the year. Truex Jr. appeared to get the best jump off the restart, but the outside line that included Jones stuck together even when Kasey Kahne broke out from behind Truex on the inside to try and take the lead on his own. With Alex Bowman and Chris Buescher the primary two behind him, Jones got bumped to the front and edged out Truex at the line to take the checkered flag. The final lap was the only lap of the entire race that Jones led.

Jones’ win was huge for the entire wave of young drivers who are new to NASCAR’s elite division. With the recent departures of highly touted names from the sport (Dale Earnhardt Jr., Jeff Gordon, etc.), many expected the young crop including Jones to find a solid foothold at the Cup level right away. That has yet to be the case. The first half of the NASCAR season has been dominated by three veterans, Kyle Busch, Harvick, and Truex Jr. Those three drivers had combined to win 14 of the 19 races run through this past weekend, including the NASCAR All Star race in Charlotte. They have also combined for 37 top 5 finishes. The only other winners of Cup Chase points races before Jones’ win Saturday were Austin Dillon, Clint Bowyer, and Joey Logano. With just 8 races remaining before the playoffs begin on September 16 at Las Vegas, it is ensured that at least 1 of the 16 playoff spots will not be filled by an automatically-qualified winning driver. If the dominance of the “Big 3” continues, it will most likely be multiple playoff spots coming down to points. The table below lists the top ten drivers without wins in order of the current points standings at the season’s halfway point.

The XFINITY Series race at Daytona on Friday saw its own double overtime drama. It appeared to be a duel between Cup driver Kyle Larson and Elliott Sadler over the final lap until Truck Series driver Justin Haley, making just his second XFINITY Series start, broke out of formation in the final turn. A huge run sent him sailing past Larson on the inside part of the track to cross the finish line ahead. However, upon official review, NASCAR determined that Haley had a tire on the inside yellow line when completing the pass. The rules allow cars to drive on or below the line, but prohibit any advancement of position while that far down the track. That wiped out Haley’s victory and gave Larson what turned out to be a photo finish (.005 seconds to be exact) victory over Sadler. It was Larson’s third XFINITY Series win of the year and second straight after winning at Chicago last week.

Kyle Larson was named the winner of the NASCAR XFINITY Series race at Daytona after this last second pass by Justin Haley was ruled illegally below the yellow line. (Motor Racing Network)

Just 10 races remain before the start of the XFINITY Series playoffs on September 21 at Richmond. XFINITY drivers who are currently automatically qualified for the postseason chase through a win and top 20 points status thus far are Tyler Reddick, Christopher Bell, Spencer Gallagher and Justin Allgaier. Ryan Preece also has an XFINITY win to his name, but will need to boost his points total to be inside the top 20 in the standings (currently sits 30th). The top 8 drivers in points who remain winless but would make the playoffs if the series ended today are Sadler, Daniel Hemric, Cole Custer, Brandon Jones, Ryan Truex, Matt Tifft, Austin Cindric, and Ryan Reed.

The Camping World Truck Series will resume action this weekend as part of the Thursday-Saturday NASCAR triple header at Kentucky. Five races remain before the start of the Series playoffs. Johnny Sauter currently sits atop the points standings with 4 wins to his name. Other drivers who are currently assured a playoff spot through a win and top 20 points standings position are Noah Gragson, Brett Moffitt, and the aforementioned Haley. If the season ended today, the drivers who would round out the 8-man Truck Series playoff field based on points would be Stewart Frieson, Grant Enfinger, Matt Crafton, and Ben Rhodes.