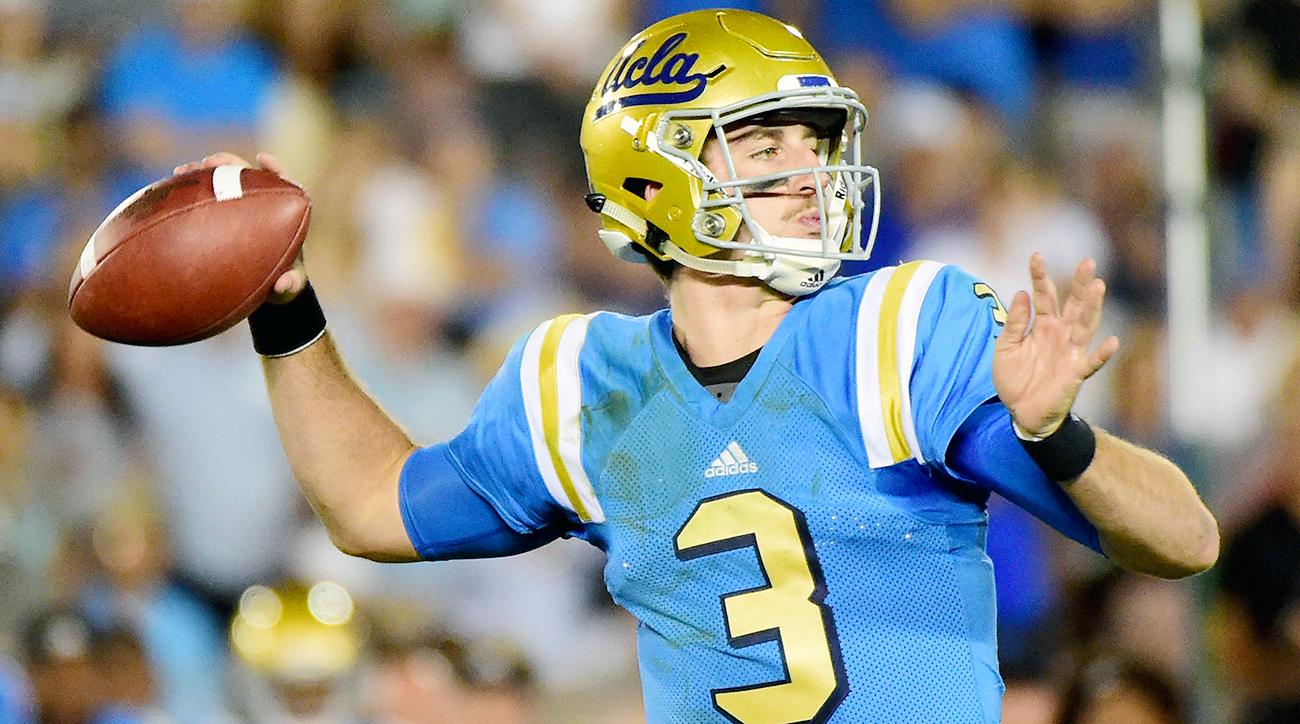 Josh Rosen is one of the most intriguing players in this year’s draft. Rosen is the one guy who seems to be getting the short end of the stick when it comes to the top five quarterbacks. Coming into this, I watched the week 1 historic 45-44 comeback win over Texas A&M, and week 12 loss to USC.

When watching Rosen play, his footwork is by far the best in the class. His pocket awareness and footwork from within the pocket is one of the best we have seen from a rookie in quite some time. In the week 1 comeback win, UCLA could not get the run game going. The Bruins finished the game with 63 yards on 25 attempts with the ground game only contributing to three of the 28 total first downs of the game. Rosen faced the third ranked defense in sacks (at the end of the season).  He was under pressure all game, getting sacked three times and fumbling in the red zone, which is certainly a negative thing. Rosen was down 44-10 with 4:08 left in the third quarter, but led the Bruins on a 35-0 run and won the game with a fake spike touchdown to complete one of the greatest comebacks in NCAA history.

If you think Sam Darnold or Josh Allen are the best quarterbacks in this draft, then you need to go back and watch Rosen. He commanded the offense and the entire weight of the season was on his shoulders. UCLA ranked 115th in the entire NCAA in rushing and gave up the most rushing yards in the entire NCAA, with 3,736 yards…that’s 287 rushing yards per game! Not to mention, UCLA ranked 114th in total defensive turnovers. Rosen had no help from his defense and always played from behind.

Against USC, Rosen was an absolute baller. He completed key third downs, hit downfield throws, and kept his team competing against number 11 ranked USC. Rosen once again had no help from his rushing attack. He made accurate throws at all three levels, and his red zone accuracy is what shocked me the most. He knows where to place the ball, whether that’s back shoulder or towards the back pylon. One of the big things I love about Rosen is the fact that he played in a pro style offense, whereas most of the other guys played in a more spread offense.

Some of the concerns with Josh Rosen are his attitude and his durability. There is a belief out there that the rookie doesn’t care about football because he was quoted saying that if his NFL career failed he wouldn’t have to get a job at McDonalds. That is referring to his father owning multiple companies and being wealthy. I think it’s just a reason for people to put Sam Darnold at the top spot, because that is where everyone else has him. If you take all the names out and just use the characteristics of Rosen (best footwork, most accurate, ran a pro style offense, most pro ready) I don’t think there would be a discussion about who goes number 1.

I believe Josh Rosen is the most talented quarterback in this draft, and is by far the safest. I think Cleveland would make a terrible mistake if they pass Rosen up at 4, especially for a quarterback like Josh Allen from Wyoming, who is one of the more raw prospect type of quarterbacks in this draft. The only negative I have for Josh Rosen is his athleticism. He surprised some people at the combine with his 40-yard dash time being better than expected, but when you watch the film, his ability to escape the pocket like the other guys is not up to par.