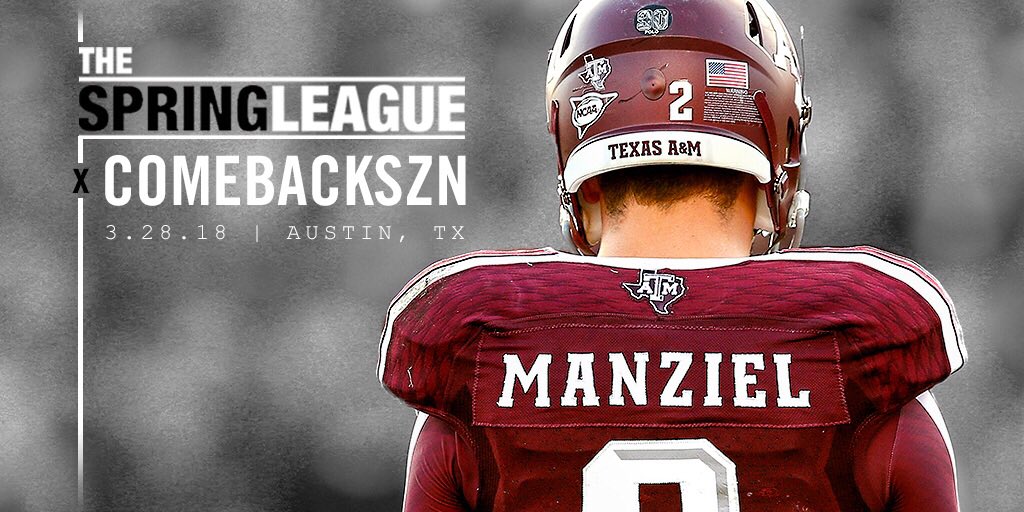 The once quarterback of the Cleveland Browns, Johnny Manziel is attempting a NFL comeback by joining the upcoming NFL Spring League in 2018.

The Browns selected Manziel 22nd in the first round, believing he could be the answer at quarterback for years to come. However, troubled amassed for the former Heisman Trophy winner from Texas A&M, and his NFL career was derailed by off the field issues.

The Spring League begins March 28, and will give a chance to former players and veterans to prove they belonged in the NFL, despite being cut by a team or failing to make the opening day roster.

Manziel, 25, last played football for the Browns in 2015, a forgettable season, in which Manziel saw limited playing time. Despite being away from football for two years, Manziel says the desire is still there.

“Football has been a huge part of my life for as long as I can remember. Sometimes you take for granted how much you value something until it’s gone. My goal is to make it back to the NFL and I realize I have to earn that privilege,” Manziel said in a statement released by the developmental league. “The Spring League has provided me with a great opportunity to play ball again, and ultimately, that is all I want to do. I miss the competition.”

The Spring League was created in 2017 to allow players to play in games and be scouted to see if any potential is there for a NFL comeback. With a small sample size of only four teams participating, the opportunity is there for Manziel, but the question remains: can he put his focus on football?

The answer is shrouded in mystery for now, but the NFL is known for giving troubled players a second chance. Manziel has received an offer to play for the Hamilton Tiger-Cats on April 7 and 14 when the Spring League is officially underway.

“We’re excited to have such a dynamic player in Johhny Manziel taking part in The Spring League,” Brian Woods, CEO of The Spring League, said in a statement. “We believe our platform is the ideal forum for Mr. Manziel to enact his NFL comeback.”