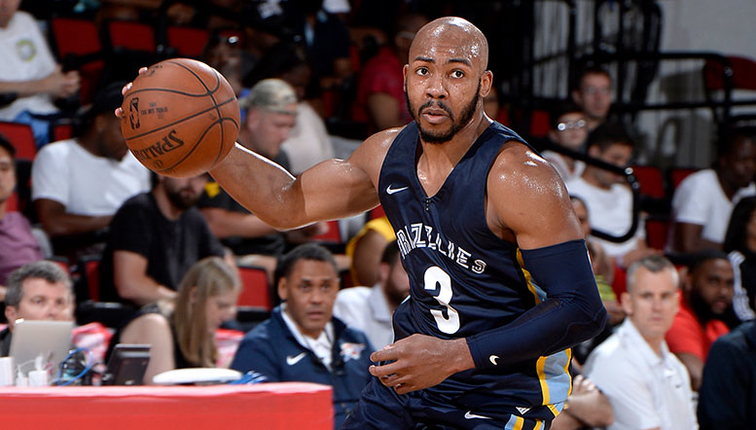 Jevon Carter continues to prove it is never a good idea to judge a player based on a few bad games. The former West Virginia star was atrocious to start the Summer League. He appeared to lack any sort of feel for distributing the ball. His shot was not falling. The defense he was most known for at West Virginia was limited by the impromptu flow and pace of Summer League. Carter was just not ready for the NBA, or so some thought. Of course, things have changed for Carter rather quickly.

Carter managed another strong performance in Memphis’s 92-86 victory over the Jazz. The rookie led all scorers in the contest with 26 points, his Summer League high. The 26 points came on a solid 11-22 shooting from the field. Carter also knocked down a single three-pointer and 3-of-4 free throws.

Yet Carter did not stop there. He was really not known for his scoring abilities as a Mountaineer. Defense and smart play were Carter’s trademark qualities. West Virginia’s hardnosed leader was one of the best do-it-all players in the nation by the time his career was over.

That do-it-all ability was on display against Utah. Carter coupled his 26 points with 8 rebounds, 6 assists, 2 steals and a block to record a little of every stat in the strong effort. While it would be just as unfair to explode with praise for Carter after a few good games as it was to explode with criticism after his slow start, the turnaround is a positive sign and should ease the worry of Grizzlies fans. The team may have found a suitable backup to fan-favorite Mike Conley after all.

With Grayson Allen and Tony Bradley Jr. out, forward Georges Niang had even more pressure on him to lead Utah’s summer squad. The favorite to land the roster spot left by Jonas Jerebko, Niang dropped another double-figure scoring performance in the loss.

Niang’s 18 point performance left him alone atop the Jazz’s summer scoring rankings. The former Iowa State Cyclone has displayed his offensive arsenal is just about every Summer League game. Better yet, Niang posted much more balanced numbers than his standard Summer League outputs.

Niang added 9 rebounds and 5 assists to his stat line for the evening. The enhanced contributions should only bolster the chance that Niang snags the open roster spot. The swingman’s scoring ability is well-documented dating back to his Iowa State days. The Jazz are more than likely quite sure of what Niang can do as a scoring option. What will continue to separate Niang from the rest of the pack is increased production in other aspects of the game. That is exactly what Niang delivered Saturday night against the Grizzlies.