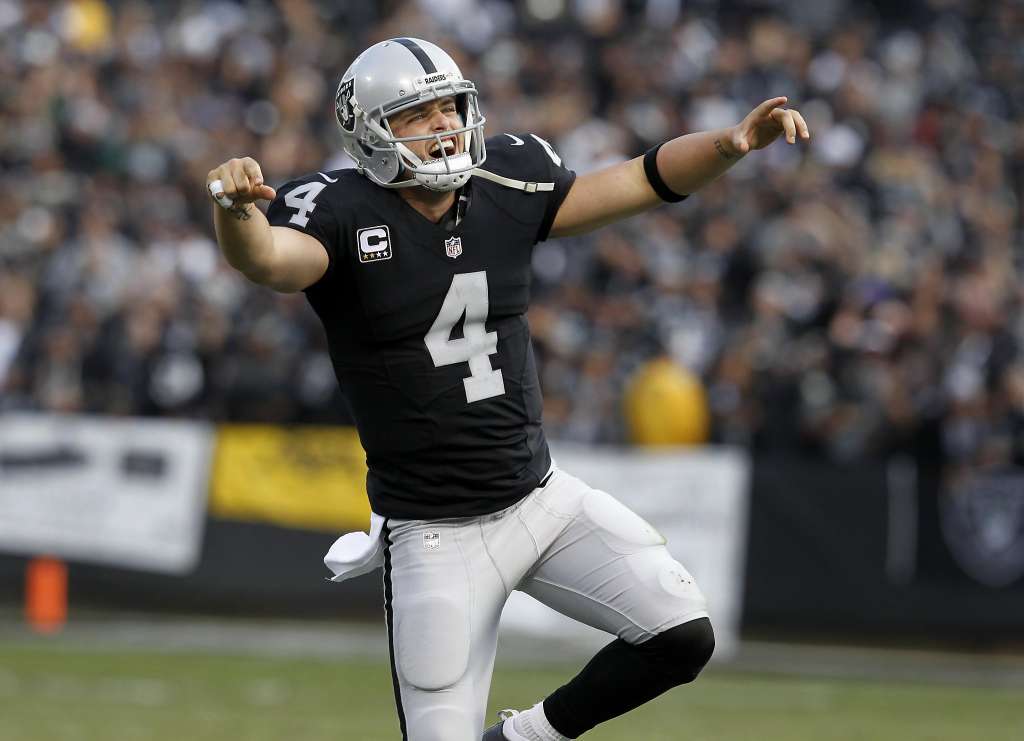 Week 9. The fantasy playoffs are getting closer and closer, so you better be playing the right players, if you’re on the outside looking in. If you have a hard call to make that could affect a pivotal game in your season, then I’m here to help. So let’s get going.

Carr has been playing some great football lately, and it’s translating to fantasy. He’s thrown for multiple touchdown passes in four of his last five games, which is turning him into a surprisingly effective streaming quarterback, despite his low ceiling. With a home matchup in a must win game against the Lions (fantasy’s 6th-easiest quarterback matchup), Carr could be a solid fill in if you lost your QB to a bye or an injury.

Minshew has made it through half the season with only one game that could be considered a disappointment, and yet he still isn’t rostered or started in nearly enough leagues. A reliable QB1 at this point, Minshew should have a good time slicing and dicing the Texans’ defense, who just lost JJ Watt for the season.

There are two defenses that you should avoid at all costs this fantasy season: the Patriots and the 49ers. While Lamar Jackson, facing New England, has proven himself worthy of a start in any matchup (although it took a minute for me to talk myself out of putting him in this section), Kyler Murray has not. He barely cracked double digits last week, after failing to reach the threshold the week before, and while he certainly still deserves a start in the right matchup, he’s made sitting him this week an easy decision.

Jones had an excellent fantasy week against Detroit, but by no means should he be rushed back into anyone in a normal-sized league’s starting lineups. The inconsistency is enough for me to wave off Jones as a starter entirely, and it isn’t like there’s an easy matchup to exploit here either. The Cowboys are the 4th-most difficult defense for fantasy quarterbacks, so Jones could be in for a rough Monday night.

Freeman has now scored in two consecutive games, and his workload is as consistent as anybody’s in the league. His ceiling isn’t forcing you to start him every week, but when the matchup calls for it, like the Browns do, you can confidently expect a game in the low to mid teens, with the potential for more if he continues to succeed near the goal line.

A no-brainer starter any other week, deploying Mark Ingram against New England is going to be difficult to stomach for anyone with some bench depth. After all, no team has allowed fewer fantasy points to opposing backs than the Pats. But it’s still the move; the Patriots have actually been beatable on the ground recently, getting gashed often by Nick Chubb and Le’Veon Bell for a combined 201 yards on the ground in the last two games. Their success has come from holding bad teams out of the end zone, which is a difficult scenario to envision for a scorching hot Ravens team in front of their home fans. An acceptable RB2 fantasy day is entirely plausible here.

The Cardinals Backfield vs 49ers

David Johnson is currently being ruled a game time decision, which can’t be viewed hopefully at all after he only saw one carry after being given the same designation in Week 7. Chase Edmonds has already been ruled out. Some combination of Kenyan Drake, Alfred Morris, and Zach Zenner will pick up the pieces, making this backfield an unpredictable mess that shouldn’t inspire any hope against San Francisco.

The matchup isn’t intimidating, but Breida has been dealing with an ankle injury, and on a short week, there’s no telling how much of the field he’s going to see, especially given the depth behind him. Tevin Coleman is clearly becoming the #1 guy too, and can handle an increased snap count. If the 49ers can leave the Cardinals behind tonight, then you would think Kyle Shanahan would do his best to protect one of his top offensive pieces.

Before you put him on the shelf against the Niners and then for his bye, give Metcalf a shot against the Buccaneers, who once again are one of the easiest matchups for quarterbacks and wide receivers this season. Metcalf catching two short touchdowns against Atlanta bodes well for his usage as we turn the corner into the second half of the season. Metcalf is going to be looked at often no matter where the Seahawks are on the field, and he should see plenty of success with those looks this week.

Gallup has gone cold lately, but fresh off a bye, facing off against the floundering Giants defense could be the cure for what ails him. Gallup started this season hot with a 7-catch, 158-yard performance against the Giants, and their defense hasn’t improved since then, so take another chance on Gallup as he tries to right the ship with an opponent he’s comfortable facing.

McLaurin has only produced one start-worthy game since Week 4, and the current uncertainty surrounding the quarterback position can’t be helping. No matter who is taking the snaps, McLaurin won’t be a good start with Tre’Davious White opposite him. McLaurin’s downward trend after his hot start might point to how the rest of his season will look; he’ll be a risky start from here on out.

Jarvis Landry has always struggled to get into the end zone, and at the midway point of the season, he still hasn’t crossed the goal line. Heading into Denver to face that Broncos defense at Mile High doesn’t quite strike me as the remedy for that problem, and while Landry’s floor is high, it isn’t high enough for me to not want to look elsewhere this week.

Hey, if Darren Fells wants to insert himself into the TE1 discussion at age 33, who am I to tell him he can’t do it? He has caught 23/27 of his targets this season, and he’s beginning to see more looks. He already has 5 touchdowns on the season too, with 4 coming in his last 4 games. If you’re thinking of starting him, just make sure to do it before kickoff at 9:30 A.M. ET, with the game being played in London.

If he’s active, you still shouldn’t start him against the underrated Panthers defense, who hold tight ends to just 6.1 points per game. Given Walker’s lack of production since Week 1 and the recent emergence of Jonnu Smith, it’s difficult to call Walker the top fantasy tight end on his own team right now.