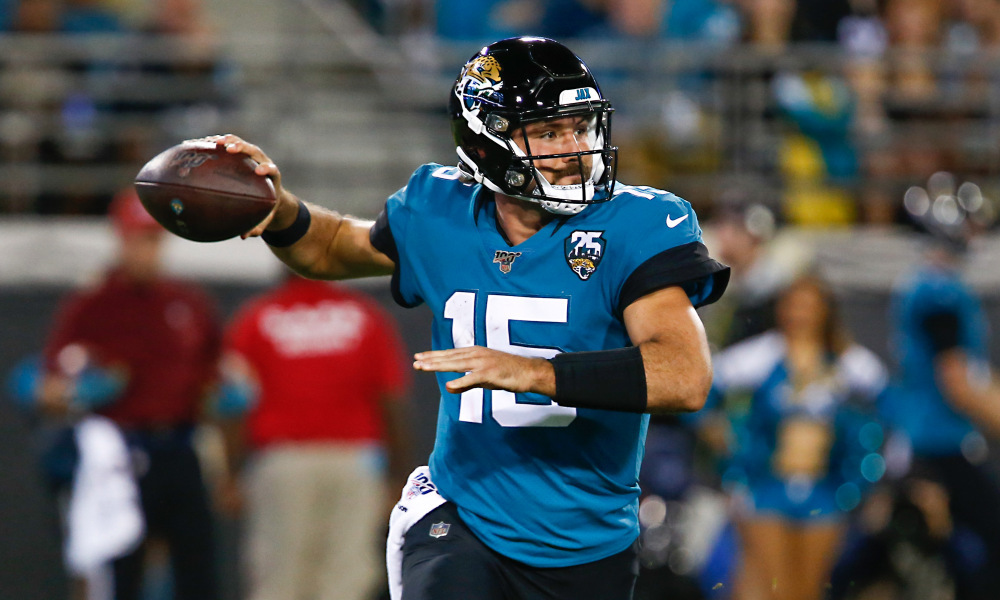 We are officially at the halfway point of the NFL season. While injuries and the general nature of the game will always ensure that NFL handicapping remains a weekly affair, having a full half season’s worth of statistics can certainly help bettors refine their numbers as the season continues. Having done just that, here are my best bets to bank now for Week 9.

Why not get your betting action started early with the final London game of the season? There are high stakes in the jumbled AFC South standings for this divisional clash to boot. The game may be happening across the pond, but can we really say it is a true neutral site? This will be the seventh year that the Jaguars have made the trek to London as a result of an agreement in place for them to play one of their home games there annually. Jacksonville is 3-3 all-time in London games, but 3-1 in their last four. Houston, meanwhile, will be playing their first London game ever this Sunday. Having some experience with the travel and atmosphere has to benefit the Jags to some degree.

Now to the football-specific analysis. Defensively, the Texans are dealing with a severe rash of injuries, particularly in the secondary where Johnathan Joseph, Bradley Robey and A.J. Moore headline a long list of defensive backs on the injury report. Then there’s pass rusher J.J. Watt, who was lost for the season last week to a torn pectoral muscle. The Jaguars offense may not always be pretty, but Gardner Minshew continues to get it done. His rapport with D.J. Chark is undeniable, and Jacksonville was able to get Chris Conley going last week as well to the tune of 103 yards receiving and a score. Additionally, the run blocking has greatly improved from the start of the season, evident in the rushing statistics of Leonard Fournette.

Jacksonville is as live a dog as any. The current moneyline at MyBookie sits at +110 should you wish to bet them outright for better value rather than catching 2.5 at -110.

Anytime that travel across time zones is involved, I automatically do a double take on a close spread that lists what would appear to be the better team as a road underdog. After said double check, I am firing away on the Lions getting two points at the Raiders. Detroit is no stranger to high-scoring affairs this season, and this game could very well follow a similar script. Oakland is allowing the fifth-most points per game (27.4) while Detroit gives up the seventh most (26.6).

The Lions offense has been clicking to the point that I am quite confident in backing them to win a shootout-type of game. They showed last week that they are just fine without injured running back Kerryon Johnson. Matthew Stafford continued a terrific first half of the season with 342 yards passing and a trio of touchdowns. Kenny Golladay and Marvin Jones would give the Raiders 30th ranked pass defense (according to Football Outsiders DVOA ratings) fits on their own. Add in the resurgent Danny Amendola, and the Lions will be able to attack the Oakland secondary all over the field.

Similar to the Jaguars, if you like Detroit to both cover the two-point spread and win outright, you will likely find better value on the moneyline at your respective book. MyBookie currently has the spread line at the standard -110 while a moneyline bet on Detroit is currently +105.

Things went from bad to worse for the Broncos, with the announcement that veteran QB Joe Flacco will miss this week’s game and beyond. While rookie Drew Lock figures to be a part of Denver’s plans at some point, he still needs more time to recover from a thumb injury. That leaves 27-year-old Brandon Allen as the starting quarterback for the Broncos. A line that opened at Cleveland +2.5 has seen a 5.5-point shift with the Flacco news.

If you aren’t familiar with Allen, it may be because he has never taken an NFL snap. He was drafted in the sixth round of the 2016 Draft by the Jaguars and also spent time with the Rams the past two seasons. Needless to say, he isn’t exactly stepping into an enviable situation in terms of pass protection. The Broncos offensive line has been atrocious, to the tune of allowing 3.4 sacks per game (T-6th) and ranking 28th in terms of pass protection (according to Football Outsiders Adjusted Sack Rate). The onus will fall even more heavily on Phillip Lindsay, Royce Freeman and the run game. Unfortunately, they will be running into a defensive front that features Myles Garrett, Sheldon Richardson and Olivier Vernon. And with the passing attack in peril, you can count on Cleveland gearing up to stop the run.

Baker Mayfield and the Browns offense haven’t been good, but they don’t have to be to outscore the Broncos. There is a little extra juice on the Browns side of the spread, currently sitting -115 at MyBookie. Most of the initial value on the opening 42.5-point total line has dried up, but my numbers still like the under at the current total of 39, especially with Denver’s QB situation.