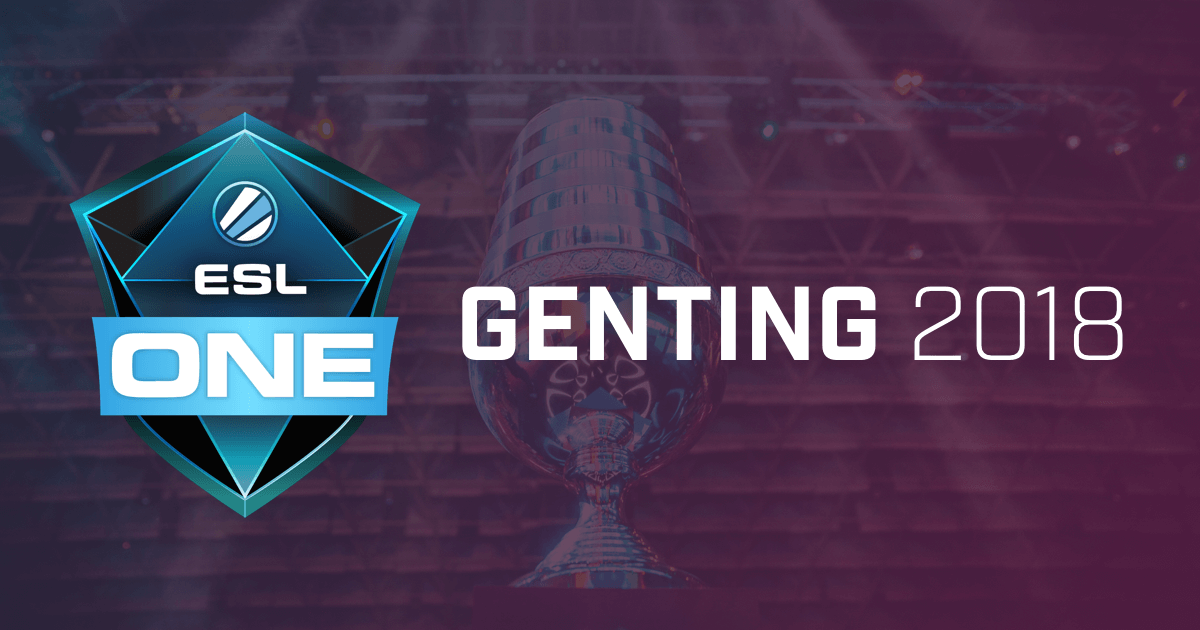 Image is courtesy of ESL One.

Which Match to Watch?

Usually, all teams will lower their gear on the first day of an event. Evil Geniuses was notorious for this sin, and to some extent, Natus Vincere. But with a double elimination system right from the get-go,  all teams can’t perform below their best on the first day, especially with a best-of-one as an opener. All teams, whether they are a favorite to win the tournament or the less favorable one, must perform on their best to be able to continue their journey in the tournament or day one elimination will be their prize. With that in mind, let’s take a look on which match that will certainly capture the essence of competitiveness in Dota on the first day of ESL One Genting.

1. Complexity Vs Fnatic BO1 (The 1st series of Group A)

With the recent acquirement of Sahil “UNiVeRsE” Arora, Fnatic adding more flavor of the NA to their line up even though they are technically a team from the SEA region. They currently have four former players that previously competed in the NA region. They are Jacky “EternalEnvy” Mao, Johan “PieLieDie” Åström, former Cloud 9 member, Abed “Abed” Yusop, former Team Onyx / Digital Chaos member, and Sahil “UNiVeRsE” Arora, former Evil Geniuses member. They will certainly deliver a match capable to awe the audience watching from the screen. Prediction: Complexity 1-0 Fnatic

Would you look at that? Both teams representing the same franchise and both teams are from China. A lot of people are branding Chinese Dota as boring and too farm oriented. This statement is true to some teams, but not to both of these teams. VGJ Thunder are notorious for their early aggression of their support and core. Zhang “LaNm” Zhicheng and Lu “Fenrir” Chao from VG are two of the most aggressive support in Dota scene with both of them averaging one kill per minute in the competitive scene, according to Dotabuff. Not wanting to be overshadowed, VGJ Thunder rise to the occasion with Galaxy Battles II win over Evil Geniuses at the Grand Final. The dismantled EG with a resounding 3-0 win, not letting a single game was taken from them. With stats like that, this match will be a statement that Chinese Dota is not always boring and too late game oriented. Prediction: Vici Gaming 1-0 Vici Gaming J. Thunder

3. Evil Geniuses Vs Natus Vincere BO1 (The 1st series of Group B)

Two teams eager to prove that they belong in the big stage. Evil Geniuses and Natus Vincere, former International and countless tournament winner from the perspective of the community, is in the shadow of their former self. Evil Geniuses are trying desperately to get out from their own shadow by releasing Sahil “UNiVeRsE” Arora and picking up its former team member Rasmus “MISERY” Filipsen. NaVi, on the other hand, is on their brink of resurrection as they prove to be a strong contender after a disappointing three years of lack of accomplishment. The acquirement of Vladislav “Crystallize” Krystanek and Vladimir “RodjER” Nikogosyan prove to be a catalyst of their come back to the top. Prediction: Evil Geniuses 0-1 Natus Vincere

4. Newbee Vs LGD Forever Young BO1 (The 2nd series of Group B)

Hailed as the first and second best China team at the end of The International 2017, Newbee lives up to expectation while LFY stumble to failure. Newbee are the strongest contender to Team Liquid, the eventual winner of The International 2017. They enter 2018 with high momentum sitting at fourth on the DPC Leaderboards and winning The Perfect World Master. LFY, on the other hand, was nowhere to be found. Their best result after The International was winning Dota 2 Pro League S4 in China. But the most noteworthy thing is the fact that they defeated Newbee in that tournament. With experience of defeating the best team in china, they are trying to prove that they are not out of the big stage in Dota 2 Pro scene. Prediction: Newbee 1-0 LGD Forever Young