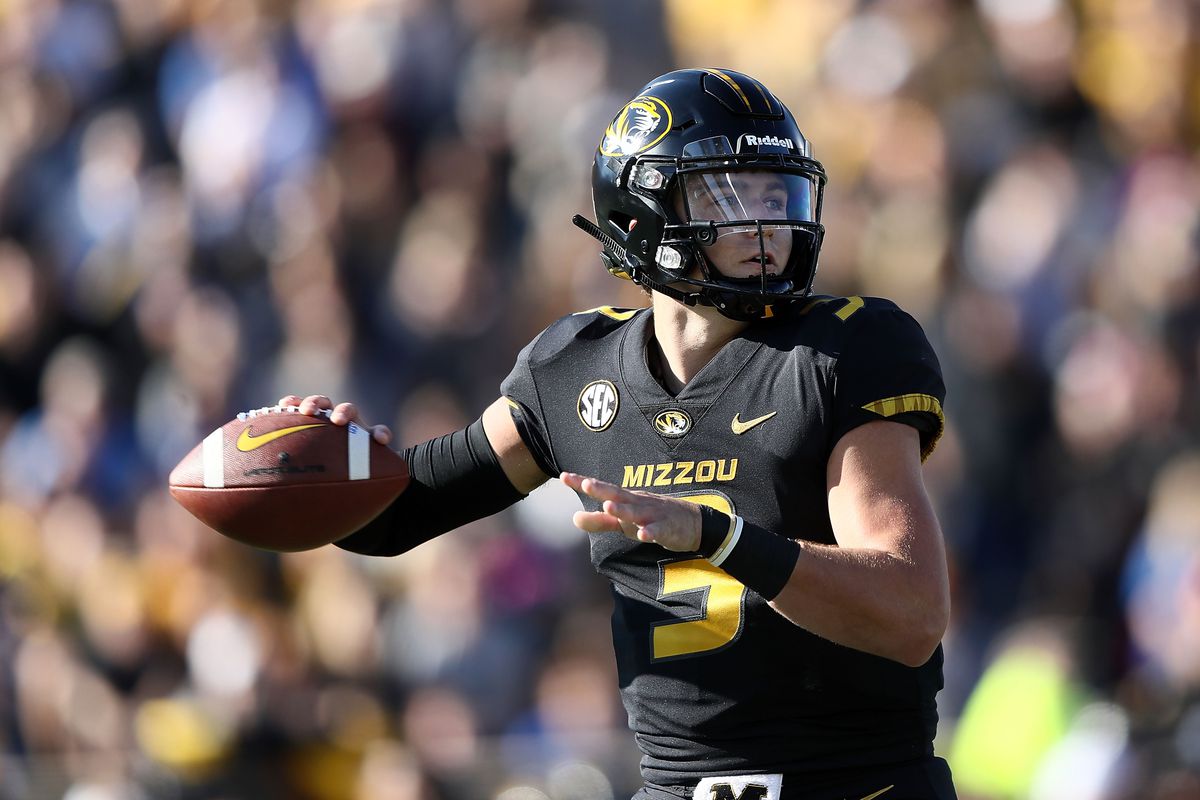 A first round quarterback is a heavy decision for an NFL Franchise to make. You have the sure bets, like Andrew Luck, Cam Newton, and Matthew Stafford. Then, there are the first round quarterbacks that have some question marks. We’ve seen some succeed, like Patrick Mahomes, Russell Wilson and Kirk Cousins, and we have seen some not pan out, like Blake Bortles, Johnny Manziel, Paxton Lynch and E.J. Manuel.

In this year’s NFL Draft, it’s pretty clear the top guys are Kyler Murray and Dwayne Haskins. But what about the quarterbacks after the top two? In particular, Drew Lock. Lock is a senior out of Missouri. In his career at Missouri, he threw for 12,193 yards, 99 touchdowns and 33 interceptions, while completing 56.9 percent of his passes. Lock also ran for 437 yards and 9 touchdowns in his four years.

Lock is a big man, standing at 6’3 ¾” and weighing in at 228 pounds. The Missouri product showed off his big arm in college. A common comparison that I have heard is Jay Cutler, which could be a good career outlook for Lock, since he has his head screwed on straight, unlike Cutler. But when I watch the tape, Lock reminds me of 2018 first round pick Josh Allen. They similarly have strong arms, good athleticism, and have an issue with footwork and accuracy.

Lock may not be the best at many things, in comparison to the other draftees, but the one quality he does have over the others is his arm strength. Lock possesses the best arm strength in the entire rookie class. Lock routinely show his arm off when he gets his footwork and body all flowing as a unit. Another strong point of Lock is when the pocket is clean, he stays tall and delivers hard thrown balls.

Lock also has great athleticism. When he needs to run, he is able to get out of the pocket and out-run linebackers. He is also smart and slides when a running option and scrambling out of the pocket.

Lock is a repeat customer when it comes throwing off balance. Over and over again did I see Lock not step into a throw because of how strong his arm is. He can get away with throwing off his back foot at the college level, but in the NFL, he can run into some trouble with fading on throws.

Footwork is also another concern. When the pocket is clean, Lock usually has good footwork, but when he is pressured, his footwork gets erratic. Time and time again you see Lock feel pressure and not reset his feet. He also commonly has what I like to call “cement feet.” Cement feet is where a quarterback plants their feet in the ground, but when ready to throw, they don’t reset their feet and just use their arm to make pass. You will see in the video I commonly point out Lock’s poor footwork.

Lock seems like a lock (no pun intended) to be a first round draft pick, but where in the first round is beyond me. If Lock is a first round pick I fear he will be forced to start right away for a team like Miami or Washington. Lock is a player who I believe needs to sit a year or two behind a seasoned veteran, like Eli Manning, Tom Brady or even Joe Flacco. If Lock gets forced into action, I fear he will not be ready and his inconsistent footwork will be on full display. This quarterback is the definition of a player with a low floor but high upside, which has proven to be worth the risk of a first round pick.

Colleges With the Most Players in the NFL