Czechs Next as Team USA Rolls in Opener 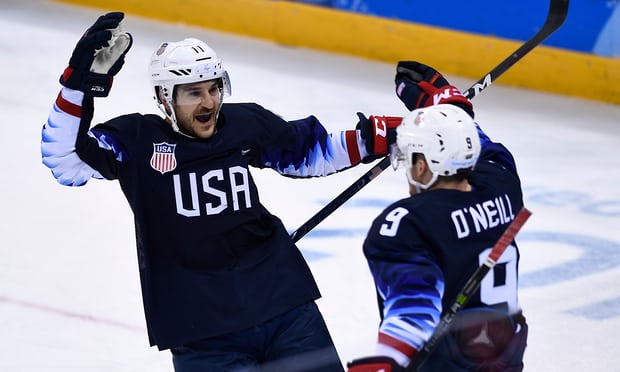 Team USA started its play in the knockout round of the 2018 Winter Olympic Hockey Tournament with its best showing so far in Pyeongchang, racing past Slovakia 5-1 to reach the quarterfinal round.

Next up is a test against the Czech Republic, the No. 2 seed, in a start just after 9 p.m. CT tonight.

Ryan Donato scored twice as the U.S. defeated Slovakia for the second time in the tournament. Now the challenge gets more difficult against a Czech squad that is one of only two undefeated teams so far at the Olympics.

The rest of the first round was more competitive, with two overtime games and two lower seeds advancing:

The Norwegians picked the perfect time for their first win of the tournament, as Alexander Bonsaksen’s overtime goal gave them the victory. It’s the first time Norway has reached the quarterfinals at the Olympics, and they’ll face the No. 3 seed, the Olympic Athletes from Russia.

The host country battled valiantly, trailing only 3-2 going to the final period and starting that frame with a power play. But Finland finally finished things off to advance to what likely will be the strongest matchup of the quarterfinals against No. 4 seed Canada.

The 9th-seeded Germans got a goal from Yannic Seidenberg to advance past the Swiss and advance to a rematch against No. 1 seed Sweden in the next round. The Swedes were the only team to win all three of their pool play games in regulation, including a hard-fought 1-0 win against Germany a week ago.

Switzerland won’t take a medal home this year, but the Swiss did finish off strong tournament run with a 1-0 victory against Japan in the tournament’s fifth-place game. Florence Schelling stopped all 20 Japanese shots.

The bronze medal game early Wednesday pits Finland and Russia, while Team USA and Canada face off late Wednesday for the gold medal.