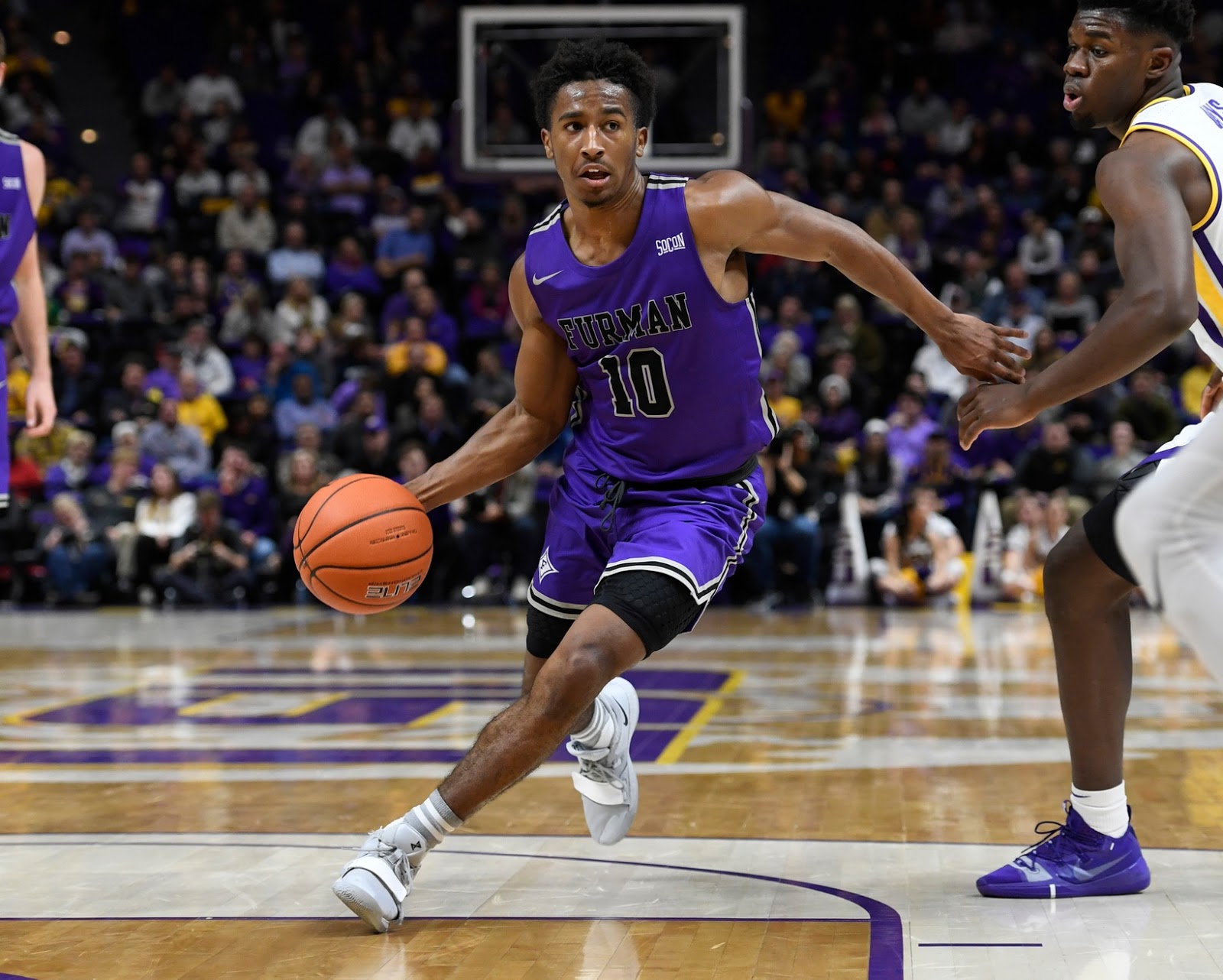 Alex Hunter and the Furman Paladins need to win the SOCON tournament in order to reach March Madness. (Credit: Furman)

Ah yes, the mid-major thieves! Every Power 5 bubble teams’ worst nightmare this time of year. With most of college basketball’s 32 conferences typically being one-bid leagues, that means only the conference tournament winner will ultimately make the field of 68. This year, however, there are a handful of leagues where one or more teams have seemingly done enough to earn an at-large bid into the NCAA Tournament field with or without a conference tournament championship on their resume. That means, should these teams fall in their respective mid-major tournaments, a bid into the field will be stolen by the eventual tournament winner.

So, who are this year’s mid-major locks into the field? Which teams are primed and ready to steal a bid? Who are some longshots to keep an eye on in conference tournaments? Read on to find out!

Nevada has spent the entire season in the AP Top-25, with most of it seeing them in the top 10. Last Saturday’s loss to none other than Utah State dropped them to 17th in the rankings, but with a record of 27-3 and the national recognition they have garnered, Nevada is assured an NCAA berth. The Aggies meanwhile have built up their record by beating the teams they are supposed to beat. They have now split regular season meetings against Nevada, San Diego St. and Fresno St. Close games against both Arizona St. and 21st ranked Houston resulted in losses, but there is no bad loss to be found on the resume. Utah St. should go to Vegas with the goal of winning the Mountain West tournament, but if they fall in the finals, they still should sneak in.

It’s no surprise that the Aztecs and Bulldogs are teams 3 and 4 respectively in the current Mountain West standings. Each has beaten Utah St. once. SDSU also put its suffocating defense on display in a home win over Nevada while Fresno St. lost both regular season meetings against the Wolfpack by just a combined 16 points. If San Diego St. takes down Nevada on the road this weekend, they could insert themselves into the NCAA Tournament bubble picture. They would likely still have to win the Mountain West tournament though, given lopsided non-conference losses to Duke and Iowa St. Fresno St. lacks any top notch wins and must run to the title in Las Vegas to punch a ticket.

The Rams don’t have much of a resume other than wins over Fresno St. and Southland-leading Sam Houston St., neither of which stand for much. They have been playing well of late however, taking Utah St. into overtime this past Tuesday. Meanwhile, the Lobos are another sub-.500 team but they did pull off a shocker over Nevada in conference play. Could this inexperienced group pull off the unthinkable in Vegas?

All the Terriers have done is throw up an undefeated regular season in the SOCON, finishing with an 18-0 mark. Making it even more impressive is the fact that three other teams in conference are lingering around the NCAA Tournament bubble despite its status as a mid-major league. Currently ranked 22nd in the AP Poll, Wofford’s non-conference schedule included a win over South Carolina and three 11-point road losses to tourney-bound North Carolina, Oklahoma, and Mississippi St.

It’s these three teams that have made Wofford’s undefeated conference season more remarkable. Despite excellent records for each, given the SOCON’s mid-major status, all must win the conference tournament in Asheville to get into the Big Dance. UNC Greensboro’s only other conference loss to a team not named Wofford was against Furman. The Spartans also picked up non-conference wins against good Radford and Prairie View A&M teams. East Tennessee St.’s five conference losses came to Wofford, UNC Greensboro and via a split with Furman. Non-conference wins against Winthrop, Sam Houston St. and Georgia Southern don’t hurt, as well as close losses to Georgia St. and Creighton. Finally, this Furman team became the first in school history to be ranked in the AP Poll earlier this year and boast a huge win over 8th ranked Villanova. The Paladins split with UNCG and ETSU, lost twice to Wofford, and took a tough loss to Samford to account for their five conference defeats. The bottom line is that any one of these teams is capable of emerging victorious in Asheville and advancing to the Big Dance. The question is, who can take down Wofford to enable one of these thieves to do so?

I mean, please. An undefeated WCC record, 29 wins overall, and a number one overall ranking in the AP Poll? The Bulldogs are comfortably in and have their eyes set on a one-seed in the West Region of the bracket.

This year’s St. Mary’s team just doesn’t have the record or resume that it has in past years to make the tournament as an at-large team behind Gonzaga. A big win over New Mexico St. and a close loss to Mississippi St. are the only real attractive points from the non-conference slate. The Gaels non-Gonzaga WCC losses came to BYU, San Francisco, and Pepperdine. BYU tied the Gaels in terms of conference record but will have to play one extra game in the WCC tournament by virtue of being the 3-seed on tiebreakers. The non-conference schedule included a state championship by beating both Utah and Utah St. Finally, San Francisco holds two Pac-12 wins and a close loss to Buffalo on their resume. But closing the WCC season on a three-game skid to teams below them in the standings is certainly cause for concern.

This Toreros team came so close on so many occasions this year. They did get wins over San Diego St., Colorado and Washington State, while losses to Washington, Ole Miss, Gonzaga Oregon and Drake all came by 10 points or less. Injuries plagued San Diego during much of conference play, but they are healthy heading to the WCC tournament in Vegas. Can they run the gauntlet and crash the Big Dance?

The Bulls have been ranked for nearly the entire season and are loaded with upperclassmen, who were a part of the team that knocked off Arizona last year. They beat Syracuse on the road to earn the label of “New York’s Powerhouse” for this season. They know they will be in the dance; the question is their seeding.

Bowling Green beat Buffalo once, so why can’t they do it again? With the current conference standings as is, the Falcons wouldn’t see the Bulls in the MAC tournament until the championship game. BGSU suffered narrow defeats to VCU and St. John’s in the nonconference season before rattling off 11 wins in the first 13 MAC games. Losing three of four down the stretch suggests they may have peaked too soon. Meanwhile, Toledo’s only MAC losses came to Buffalo (twice), Kent St., Eastern Michigan, and Ball St. They have beaten Bowling Green and everyone else. The nonconference schedule was weak, thus inflating the record a bit, but the Rockets certainly could make a run in Cleveland.

The Zips are currently a game below .500 in MAC play, but the nature of their results puts them on the radar for a big run in the tournament. Two close losses to Buffalo, a split with Bowling Green, a close loss to Toledo, and win over Kent St. are the key points of the conference schedule. Add in a three-point loss to Clemson and basically, if you need a close game, you can call on Akron. And we all no what happens in close games when the magic of March is in the air!

The highlight of the non-conference schedule was a road win over Syracuse. The Monarchs also dropped a close game to Oregon St. by just five points. The newly designed pod format that Conference USA introduced this year has worked in ODU’s favor, giving them late season wins over Western Kentucky and UTSA with opportunities for two more against Southern Mississippi and UAB. There is no way they can be left out of the tournament field.

UTSA’s non-conference resume is non-existent, making a C-USA tourney win in Frisco a must. The Roadrunners split meetings with Old Dominion and UAB and have a chance for two more good wins down the stretch against Western Kentucky and Southern Miss playing in the first pod. They also beat a North Texas team that, at the time, had only lost one game. Meanwhile, the Hilltoppers are the opposite, holding non-conference wins over Wisconsin, St. Mary’s, Arkansas, and West Virginia. After a 1-3 start to conference play, WKU has only lost three times since. The remaining game between these schools will be crucial for seeding.

Their non-conference schedule wasn’t loaded, but prior to losing to UTSA, the Mean Green had run their record to 16-1 with the only other defeat at the hands of Oklahoma. North Texas went 4-2 over their next six games following that first C-USA defeat but have since lost six straight and have fallen to ninth in the conference standings. The main cause of the downfall has unfortunately been injuries. If some of the main contributors are able to return for the tournament, you certainly can’t count the defending College Basketball Invitational champions out.