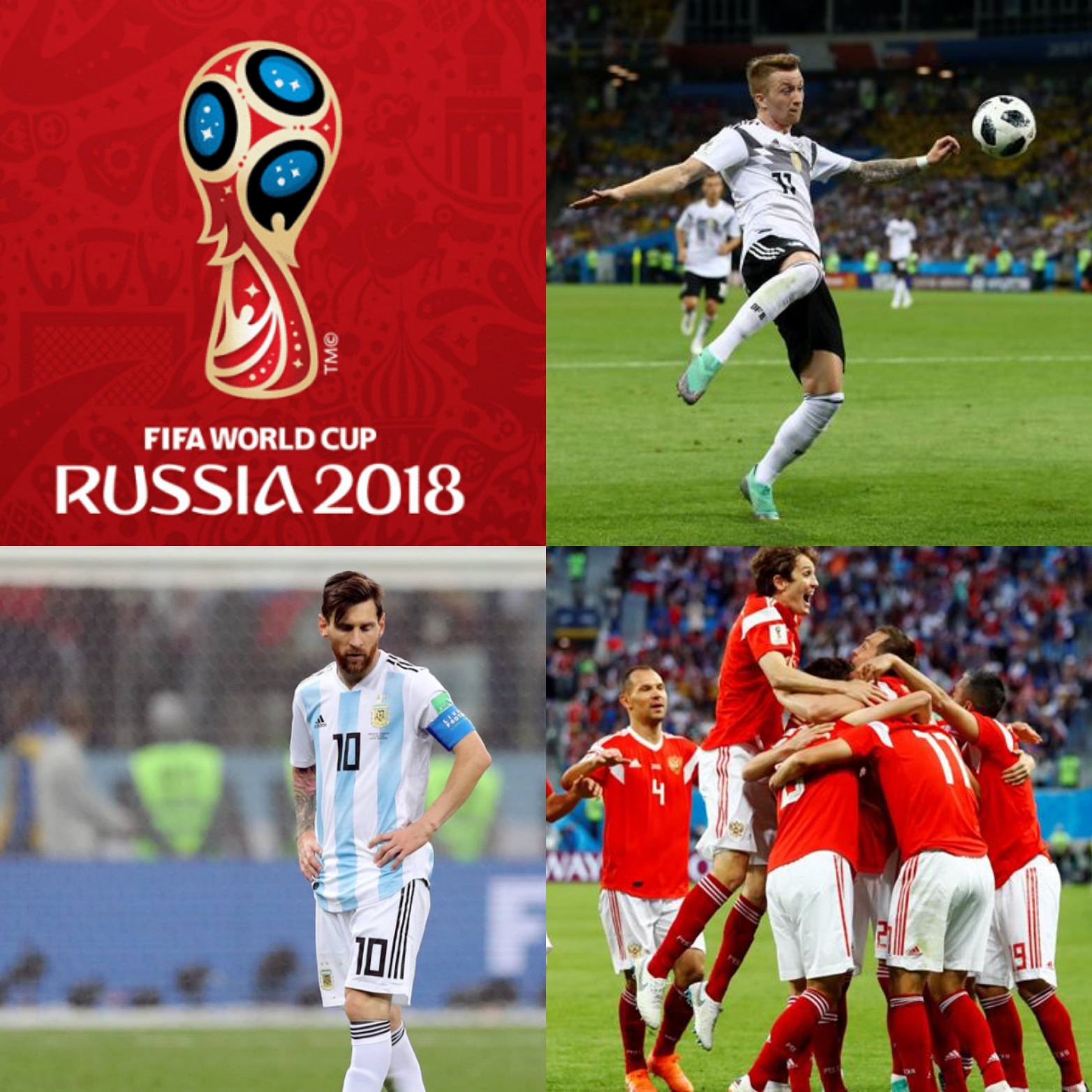 Germany's stoppage time winner, Lionel Messi and Argentina's struggles, and Russia's dominance are just some of the headlines form a Group Stage filled with drama and excitement.

The 2018 FIFA World Cup will say goodbye to the Group Play Stage this week. Over the next few days, 16 matches will be played as the entire field of 16 teams that will advance to the Knockout Round will be determined. Of the 32 teams in the tournament, only seven have been mathematically eliminated from advancing thus far, while only five have ensured their spot in the next round. All told, there is much to play for in the final wave of Group Stage action. Here is a breakdown of all eight groups as they currently stand, and a look at all of the potential scenarios that could arise this week.

The host nation Russia has been one of the big stories of the tournament thus far. They followed up the World Cup-opening 5-0 drubbing of Saudi Arabia with another impressive 3-1 triumph over Egypt (playing with Mo Sallah) to book their spot in the Knockout Round. Uruguay has gone about their business in a much quieter fashion, but the result has been a pair of 1-0 wins and a birth in the Knockout Round. Russia and Uruguay will be playing to win Group A, which Russia would do based on goal differential should there be a draw. For Egypt and Saudi Arabia, their matchup will be all about pride.

Spain and Portugal are easily the favorites to come out of this group, but they aren’t through to the Knockout Stage just yet. Iran played their defensive style of soccer nearly to perfection against Spain except for one ball that found the back of the net in the 54th minute. If they can pull out a victory over Cristiano Ronaldo and Portugal, or draw and see Morocco defeat Spain by two or more goals, it will be Iran sneaking into the Round of 16. Spain just needs to draw with Morocco to ensure they advance. Portugal can also advance by simply drawing with Iran. Morocco has been eliminated and will be playing spoiler.

Group favorite France has lived up to the billing with victories over Australia and Peru thus far. Denmark also defeated Peru and was played to a draw by Australia. Should Denmark emerge from Tuesday’s match with France victorious, they will win Group C outright. If they can force a draw, they will advance as the second team from the group. France can win the group with a win or draw against Denmark. Australia is still in the mix as well. A win over Peru plus a Denmark loss would even up the point totals. If Australia can pull out a victorious margin of two or more goals, they would be sitting pretty in terms of the goal differential tiebreaker. Peru is already eliminated from advancing.

One of the biggest surprises of the World Cup has been the struggles of Lionel Messi and Argentina. After a lackluster draw with tiny Iceland, Argentina got trounced 3-0 by Croatia in their second match. All hope is not lost just yet, however. A win over Nigeria Tuesday, coupled with a draw or loss by Iceland will allow Argentina to sneak into the Knockout Round. They could also advance with a win and an Iceland win, but would need to makeup at least a goal for the goal differential tiebreaker. Croatia has already advanced and looks like one of the best teams in the tournament thus far. Nigeria has it all in front of them. A win over Argentina and they will be through. They can also draw and advance provided Iceland doesn’t make up two goals on them in the differential. Iceland will need to pull off an upset victory over Croatia, and have Argentina beat Nigeria or have that match be a draw to bring it to goal differential and potentially further tiebreakers.

There was some panic in the air after Brazil could only muster a 1-1 draw with Switzerland in their first match and Neymar missed practice time due to injury. Neymar was back on the pitch in the second game and Brazil rolled past Costa Rica 2-0, putting themselves in good position to advance. A win or draw against Serbia on Wednesday and Brazil will be through. Switzerland also just needs a win or draw in their final match against already eliminated Costa Rica to advance. For Serbia, they just have to pull an upset of one of the most passionate soccer nations in the world to get through to the Knockout Round. If Serbia and Costa Rica both win, Serbia would win the group, and it would come down to goal differential between Brazil and Switzerland to determine the second team to advance.

Mexico literally shocked the world by taking down Germany in the first wave of matches. They then followed it up with a victory over South Korea. A win or draw against Sweden and Mexico will clinch the Group F crown. Meanwhile, Germany fell behind early to Sweden but managed to tie and then eventually win the game on a goal in the 95th minute to greatly improve their outlook to advance. A win over South Korea will do the trick.

Germany can also advance with a draw and a Sweden loss to Mexico. Should Germany lose, they will need Sweden to also lose and by more goals to win the goal differential tiebreaker. The scenarios are the same for Sweden. They need a win, and a Germany loss or draw. If they lose, they would need Germany to lose by more in order to advance. Should Germany and Sweden experience the exact same results and have the same goal margin, whichever side scores more goals in their final Group Stage match Wednesday will advance. There is also a chance for both Germany and Sweden to win Group F as well. Each would need to win and make up the current two goal deficit to Mexico in doing so. Finally, even South Korea still has a sliver of hope to advance. They must beat Germany, have Sweden lose, and make up two goals in the differential on both teams to sneak through.

Moving from Group F, where everyone is still in play, to Group G, where almost everything is decided. England and Belgium have clearly asserted themselves as the class of this group. They will meet to determine the Group champion in Thursday’s match. The hitch is that their goal margins are the same entering the match. So, if they draw, the group winner could very well be determined by the “Fair Play” scoring of yellow and red cards earned in all matches throughout the group round robin. If that is still a tie, lots will be drawn. Tunisia and Panama will simply be trying to avoid the Group G cellar.

The only thing for certain right now in Group H is that Poland is eliminated, and that it comes as a bit of a surprise as they were predicted by many to advance. The other team that was picked was Colombia. After suffering a 1-0 defeat to Japan playing nearly the entire contest with 10 men, Colombia got right back into it with a 3-0 thumping of Poland. They now sit 1 point behind Japan and Senegal who played to a draw, but it is Colombia with the goal differential advantage over both teams ahead of them. If Colombia can defeat Senegal, they will advance. A win and a Japan loss or draw and Colombia will win Group H. If Colombia draws with Senegal and Japan loses, then Senegal would win the group and Colombia would advance over Japan by goal differential. If Senegal wins, they will advance and will win the group unless Japan wins by the same or greater margin. Senegal can also ensure advancement with a draw. These same scenarios hold true for Japan with a win or draw. Lastly, if both of Thursday’s group matches wind up draws, then Senegal and Japan will advance, and the group winner will be determined by goals scored in the final match since their margins would remain the same.