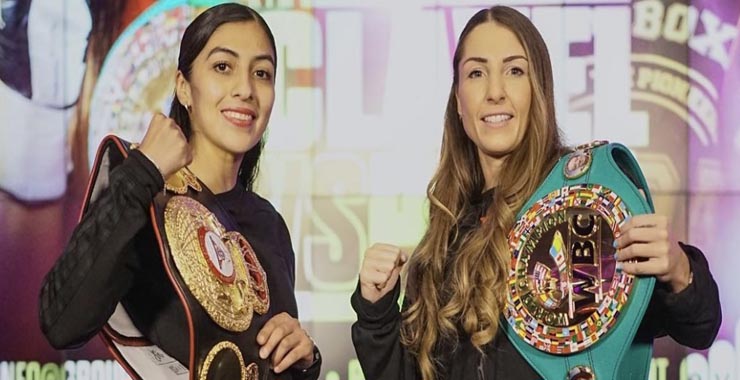 Women’s boxing is starting where it left off as the new year begins with a highly intriguing unification bout between the two of the very best, Kim Clavel and Jessica Nery Plata. The first major PPV of the year will be live from Place Bell, Laval on Friday, Jan 13. The 32-year-old WBC light flyweight titlist Kim Clavel will be fighting at her home to defend her pride against the other champion in the division, Jessica Plata who holds the WBA title.

Both women have been in excellent form heading into the event with Clavel being undefeated as a pro while Plata riding a seven-win streak. The winner of this fight will only be the major titlist remaining in the division. The Canadian superstar Clavel’s last outing came against Yesenia Gómez where she dominated the proceeding and got herself a unanimous decision victory. While Plata has been on a smashing run, winning all of her fights since losing out to Kenia Enriquez back in 2017. The fight promises to be a cliffhanger as both fighters have the ability to surprise anybody on their day.

Here is what you need to know about this flyweight unification bout between Kim Clavel and Jessica Nery Plata.

How to stream Kim Clavel vs. Jessica Nery Plata live online and on TV?

The Canadian Kim Clavel will have support from all over the country. Those who are barred from entering the arena on Friday can still watch the bout on their electronic applications using FITE tv. While the American and Mexican eyes who have their eyes stuck on Plate will have to be contented with ESPN+.

Here are the links to the above-mentioned sites where you can get all the info related to the event.

The Place Bell hotel in Laval, Quebec will be welcoming the daughter of the nation who will be targeting her second title on January 13. The event will start at 7:30 PM ET with the headliner of the evening taking the centre of the ring at 10 p.m. ET.

Kim Clavel vs Jessica Plata Tale of the Tape: