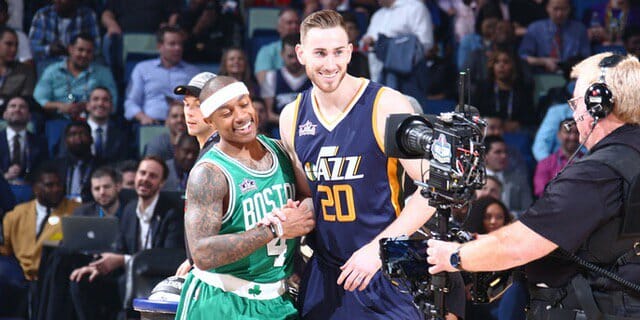 For the second year in a row, Danny Ainge has had the number three overall draft pick and has netted a marquee free agent for his team. This year, Gordon Hayward will be joining the likes of Isaiah Thomas and Al Horford in what looks to be Boston’s next “big three.” Hayward’s deal has been reported as four years for $128 million. This will be the Celtics projected lineup should the season start today:

The Problem:
There is clearly an odd man out on this roster and it is Jae Crowder. Don’t get me wrong, I have loved watching Jae Crowder develop from a salary dump in the Rajon Rondo deal to being a diamond in the rough for Boston. The issue is that he is currently blocking both Brown and Tatum from having more prominent roles on the team. To keep Crowder, the Celtics would need to cut either Kadeem Allen or Jabari Bird and move either Tatum or, more likely, Brown to the SG position. However, they would still be left with the same problem of both Brown and Tatum, being buried on the roster. Brad Stevens is a creative genius with his lineups, but even this would be tough for him to try to figure out. They could always move Crowder to the power forward position, but it would limit the Celtics to playing small-ball exclusively.

The Solution:
The other eye-popper that stands out to me about the projected lineup is the lack of depth at the power forward position. Jordan Mickey and Semi Ojeleye are both young and raw talents that would get manhandled in the NBA if they were the only two power forwards on the roster. The Celtics need to make a trade that would free up Brown and Tatum AND provide some help to the power forward spot. I believe the Celtics need to trade Jae Crowder and any non-Nets 2018 or Lakers 2018/ Kings 2019 first round pick to the Memphis Grizzlies in exchange for JaMychal Green. This trade would work out well for both teams involved. The Grizzlies would receive a valuable player, and even more valuable contract, in Jae Crowder. They would also receive another first round pick that would help them reload now that Zach Randolph has left. The Celtics would free up minutes for Brown and Tatum to develop and would be adding a 27-year-old power forward who is coming off a year in which he averaged career highs in points (8.9) and rebounds (7.1). Green is also set to only make $2.8 million this season and will be a restricted free agent at the end of it. This trade would also work well because the Celtics would still be able to hold onto the Nets pick in 2018 and the LA 2018/PHI/SAC pick in 2019 which all promise to be, at least, top-10 selections no matter how you slice it. The Celtics would also free up more cap room to try to resign either Isaiah Thomas and/ or Avery Bradley after next season.

What would you do if you were the Celtics?