Can Marc-Andre Fleury Get Into the NHL Hall of Fame Some Day? 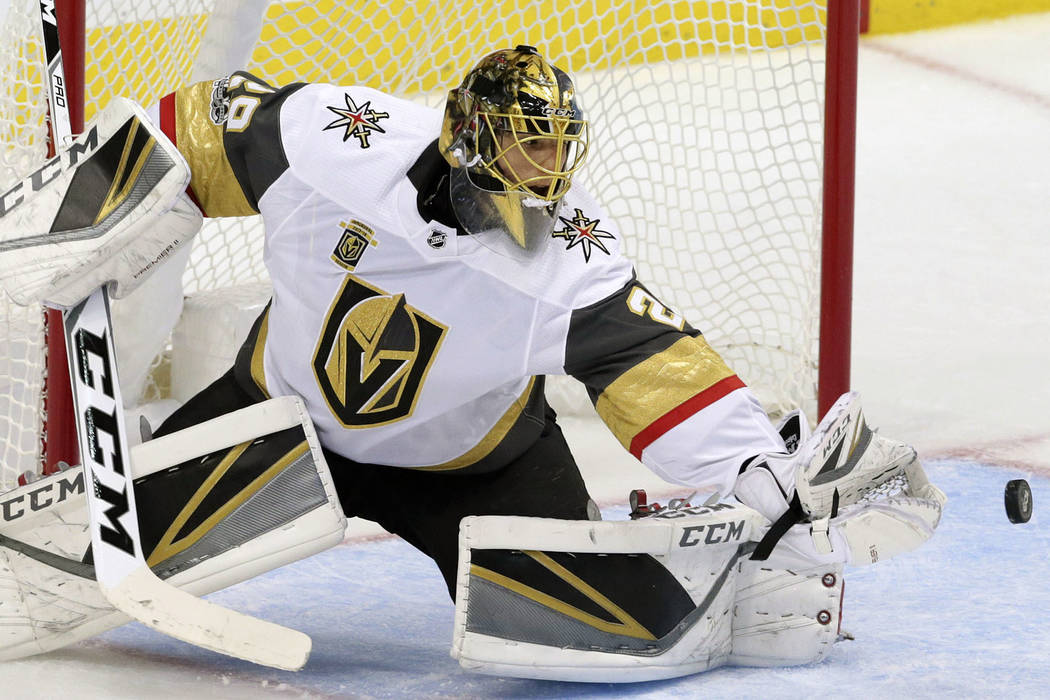 Bob Pompeani of “#1 Cochran Sports Showdown” in Pittsburgh recently asked his panel a very good question: “After watching Fleury play for the Golden Knights this season, do you think he increased his chances of getting into the Hall Of Fame someday?” The three panelists on the show, Paul Zeise, Chris Mack and Will Graves all said that after Marc-Andre Fleury’s career is over that he will get elected in the Hall Of Fame.

Marc-Andre Fleury entered the NHL for the Penguins in the 2003-04 NHL season. He was not good in that season, because his record was way below .500. It was not Fleury that was playing bad; it was that whole team played bad.

But then, Fleury started playing poorly in the 2010-11 NHL season. Between the 2010-11 and the 2014-15 NHL seasons, Fleury was not even close to a monster. He would give up a lot of weak goals throughout that time, especially in the playoffs.

Now, it’s not like his stats in the regular season were awful, it’s just that when playoff time started, you could sense that he would not do well. The Penguins could have gone to more Stanley Cup Finals if Fleury wasn’t playing bad. People might even say that during those years, Fleury might have not had a strong defense and that’s why they could not go far during those years. I am telling you that Fleury was a big part of why the Penguins could not make it to the Stanley Cup Finals in 2013 when the Penguins faced the Bruins, and the Bruins swept them in the 2013 Eastern Conference Finals.

Then all of a sudden in the 2015-16 NHL season, Fleury would not give up those weak goals.  The only goals he gave up would be goals that he was not supposed to stop. The Penguins added some key players in the trade deadline during that year as well. Then all of a sudden he got injured. Nobody knew how long he would be out that he was probably going to miss some of the playoffs, which he did.

Penguins backup goalie Matt Murray then steped out on the ice to play the final three or four games of the regular season, and Murray played like a monster. He played so well in those final games of the regular season, that the Penguins felt comfortable in having him play in the playoffs. Murray then gets injured in warmups before Game 1 of the Eastern Conference Quarterfinals against the Rangers. As a result, the Penguins put their other backup goalie Jeff Zatkoff in to see if he can somehow find a way to win. Zatkoff started Games 1 and 2, getting a victory in the first.

Murray was able to come back in Game 3 of that series and win against the Rangers. Next thing you know, he defeated the Washington Capitals in the Semifinals, then the Senators in the Eastern Conference Finals. Fleury was cleared to play during the series against the Capitals. However, head coach Mike Sullivan saw how good Murray was playing that he decided to put Fleury on the bench as a backup. Murray would later defeat the Sharks in the 2016 Stanley Cup Finals. Fleury did start one game in the 2016 playoffs, as he started in Game 5 of the Eastern Conference Finals against the Lightning but lost 4-3 in overtime.

The next year, Matt Murray started most of the games for the Penguins, but got injured before the playoffs. Due to Murray’s injury, Fleury would have to start the playoffs. Let me tell you, Fleury played some sensational hockey. He whooped the Blue Jackets in the quarterfinals, defeated the Capitals in the semifinals and won Game 2 of the Eastern Conference Finals against the Senators.

Then all of a sudden, Fleury became a little shaky again when he played against the Senators in Game 3 of the Eastern Conference Finals. He gave up four goals in the first period of play. Head coach Mike Sullivan decided to let Matt Murray play the rest of Game 3. Next thing you know, Murray gets the Penguins to defeat the Senators in the Conference Finals. Then, Murray would play all the games in the Stanley Cup Finals and beat the Nashville Predators in six games.

Fleury did not want to be a backup anymore. He wanted to play somewhere else, and Fleury got the job as the Vegas Golden Knights starting goalie through the 2017 Expansion Draft.

We all know Fleury played exceptional this past season, as he would get his team to the Finals. I think the main reason that Vegas had a deep post season run was because Fleury played extremely well. He played at a high level that we have never seen him play before. He to play hard throughout the whole season to prove to the Penguins they should’ve kept him.

In order to win championships, you have to have at least two of something. The Penguins won back to back Stanley Cups in 2016 and 2017 because they had two good goaltenders. When the Washington Capitals won the Stanley Cup this past season, they had two goaltenders in Braden Holtby and their good backup goalie Philipp Grubauer. When the Philadelphia Eagles won the Super Bowl, they had two good quarterbacks that could play in Nick Foles and Carson Wentz. The whole Golen State Warriors team has players that are not afraid to make shots to help their team win. That’s why they have won three NBA championships in the past four years.

Fleury has been through a lot of ups and downs in his career. After watching him throughout my life, he probably will make it into the Hall Of Fame someday. He has three Stanley Cup championships, but he deserves to be in the Hall Of Fame because of the attitude he brings to the game of hockey. When you look at Fleury, it is hard not to like him. He seems to be someone that you would want to be around. He knows he’s a good player, but doesn’t brag about being good.

Maybe Fleury will sign a one-day contract with the Penguins before he retires. Better yet, he might return to Pittsburgh for one more season; when he realizes that he’s old and can only play as a backup. If he can stay healthy and play in his late in 30s or early 40s, that would be cool to watch. He has been in this league for a long time. Seeing a player like Fleury play hockey for a long time is pretty cool, but everyone still has their own opinions on whether Fleury should or will make the Hall Of Fame someday.

Why Each NFC South Fanbase Should be Excited